SO much to Show and Tell! PART 2 MORE FAMILY

Our next company was Jeff's cousin and girlfriend.  They arrived the day that Brandee and Rick and the girls left.  We had just enough time to clean the cabins before they arrived.  They too stayed in a cabin for the 2 nights they were here.   Again, it was cold and rainy much of their visit.  We didn't get alot of pictures of their visit... don't know why.

We spent time inside chatting and playing cards.  They taught us a card game that was new to us... GOLF.  Chuck suggested playing for money, so we agreed, and we took their money every game! 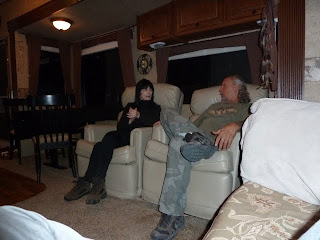 We did get out on Monday for a drive and a bit of a hike to to view Steens Pillar.  Very interesting. 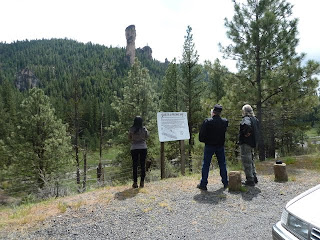 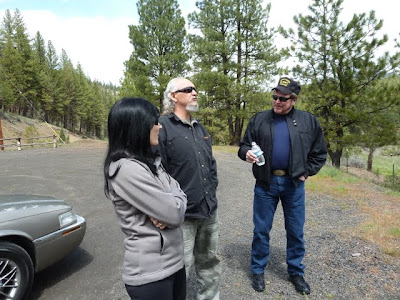 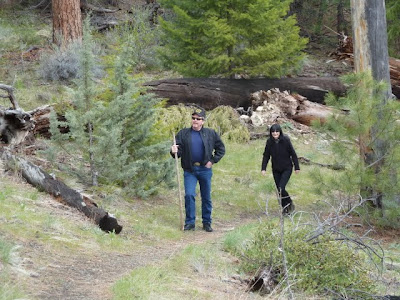 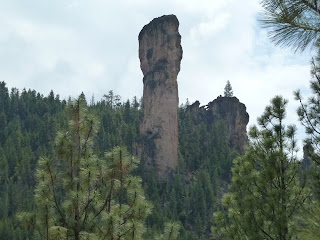 We would probably have a lot more to tell if the weather had been better and we had done more.  The day they left was beautiful!


Our next weekend, which was the 23rd & 24th, my parents came for a visit.  They live in Medford, so that was quite a drive for only 2 nights, but we did enjoy our time together.
They also stayed in a cabin.  The weather wasnt great, but it wasnt horrible either. 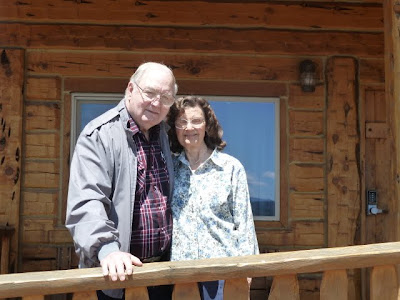 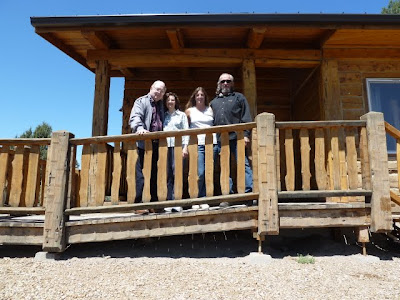 We barbequed up at their cabin, their first evening, and built a fire, but after a couple marshmallows, we were done... too cold!  Its too bad, because its such a beautiful view. 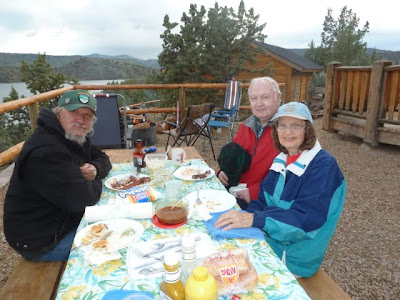 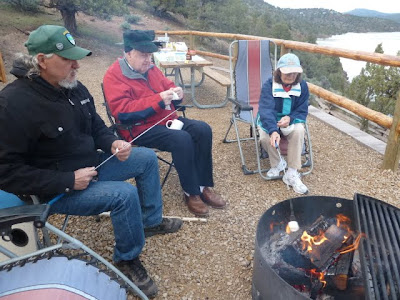 The cabins are a ways from our place, so Jeff always transported my dad in the "gater"... while my mom and I walked. 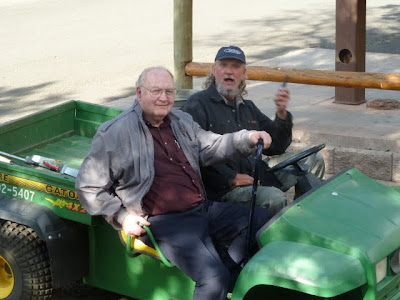 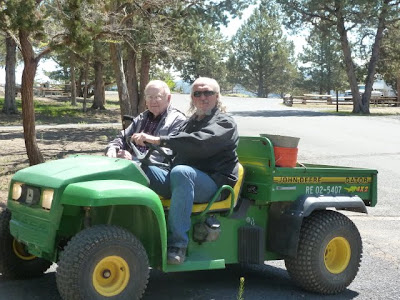 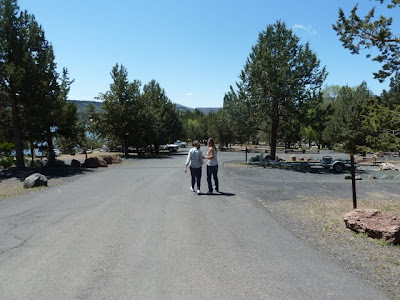 Back at our place, we enjoyed Meals and Movies and I taught Mom our new card game of Golf.  But she wouldn't play me for money!!  She would have left ahead if she did... cuz she won! 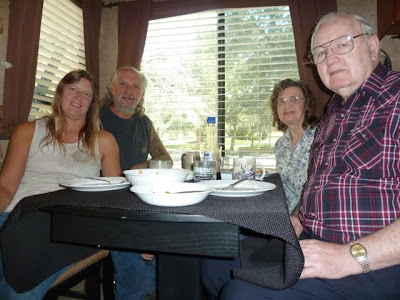 We shared stories that brought laughter.  This one I'm still not sure what the end of the story is because my Dad couldn't get more than a couple words out between the teary laughter! 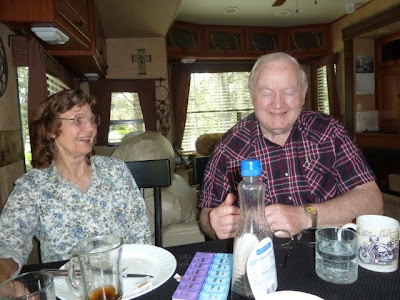 It was a beautiful calm sunny day on Tuesday when they left.  We enjoyed it together until early afternoon, then they headed home.  So glad they came. 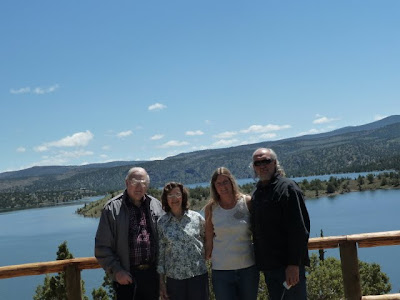 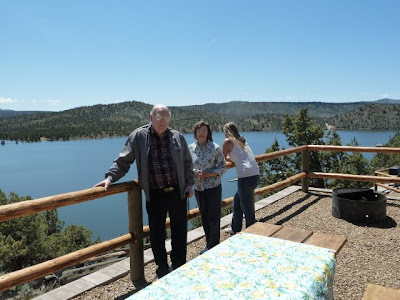 After they left, we took advantage of the sunshine, and hopped on the Harley for a ride into Redmond.  It was a great ride, and Im glad we did it, because Wednesday it was cold and rainy again.


While in Redmond, we visited the grave of Jeff's first wife and 2 children who were killed in a car accident years ago.  Its been almost 17 years now, but understandably, it is still a very sad memory. 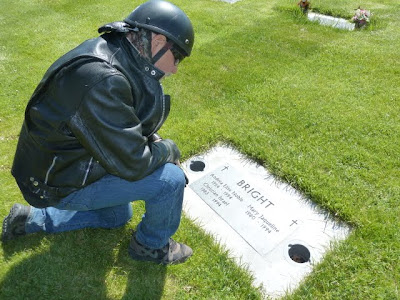 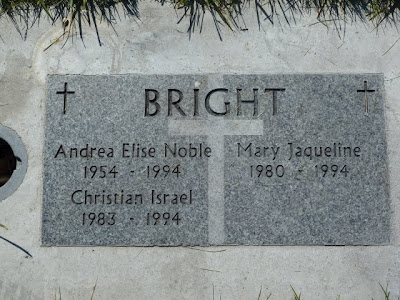 Hey... check this out.  A few weeks ago, Jeff built this for our sewer hose.  It works great, and we can adjust it for the different situations.  We saw this setup at the site of another camp host, so we took pictures and bought the supplies.  So simple, and it comes apart for transport. 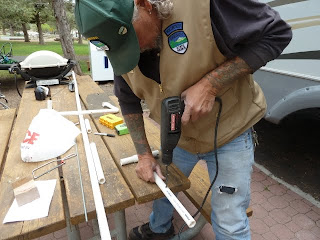 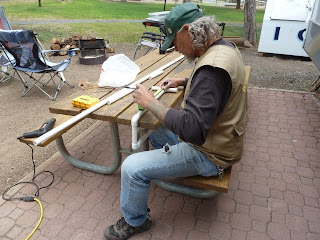 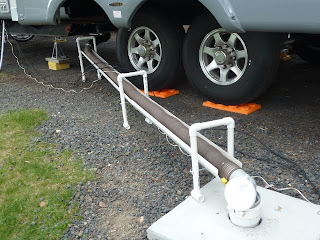 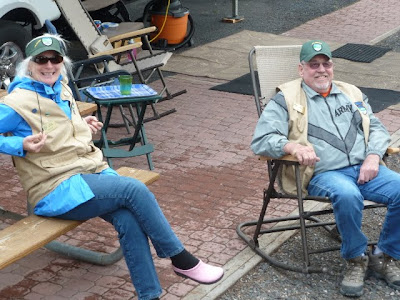 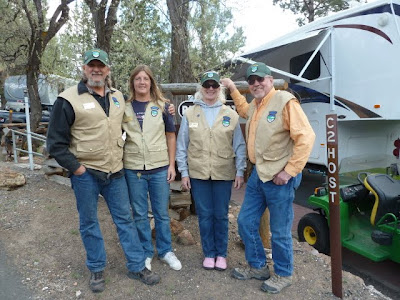 Check out the Day Use beach area.  The water in the lake rose to flood stage. 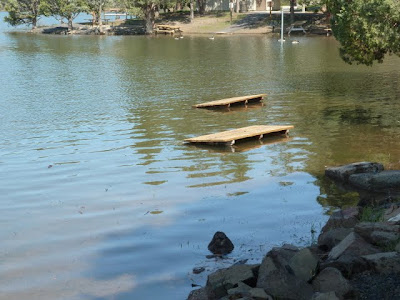 Those poor Picnic Tables... we wanted to rescue them.  But this sign says "Saving Picnic Tables is prohibited"!! 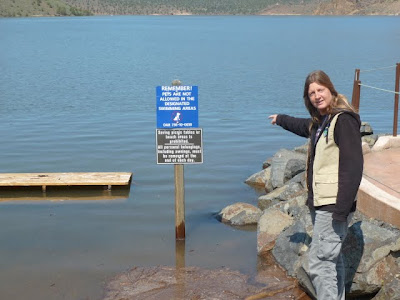 Thats all for now.  Thanks for reading.

We're gearing up for a busy holiday weekend, and our last weekend here.  We will leave next Tuesday for Carl Washburne SP on the Oregon Coast.

Maybe next post I will have some pictures of Jeffs fish catch.  But so far, no matter what he tries, he cannot catch a fish.  But we're eating plenty that we're given!﻿
Posted by The Bright's at 1:20 PM