I guess I'm just too busy playing to post!  Now I will try to catch-up real quick.
Ashland, Wisconsin
We stayed 3 days at Kreher RV Park... a City park.
We would highly recommend this park.  Its beautiful... spacious sites, on the lake. 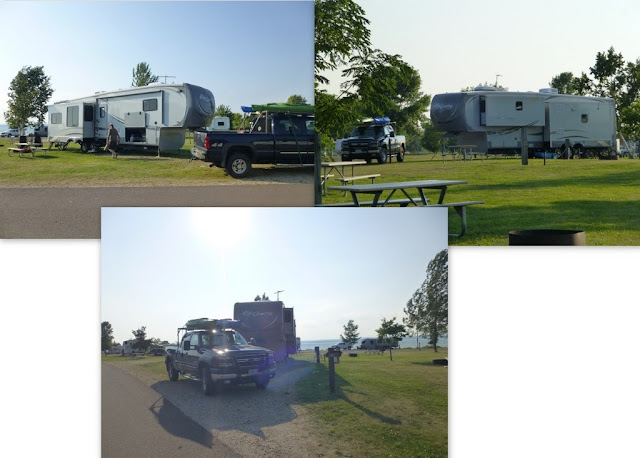 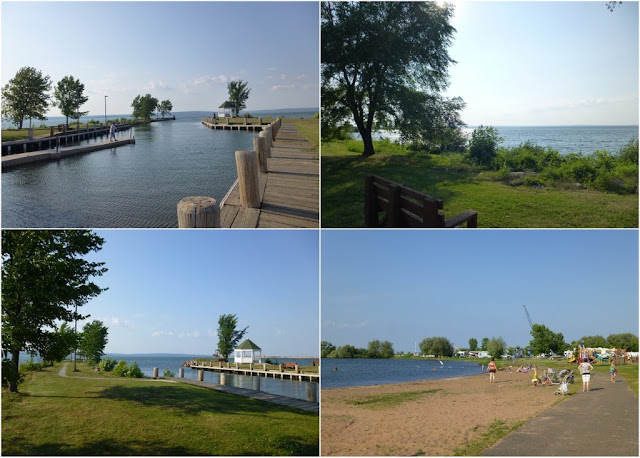 Ashland has a scenic bike path that runs for miles along the lakeshore, including through the park.
We made sure to enjoy it from one end to the other. 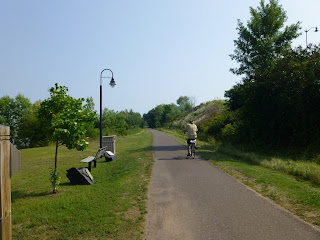 One day we toured the town on the bicycles, the next we rode the path,
with a few stops at points of interest, which included history and fresh flowing artesian water!
Ashland is a town of Murals.
Old buildings all over downtown display colors that tell stories of earlier days. 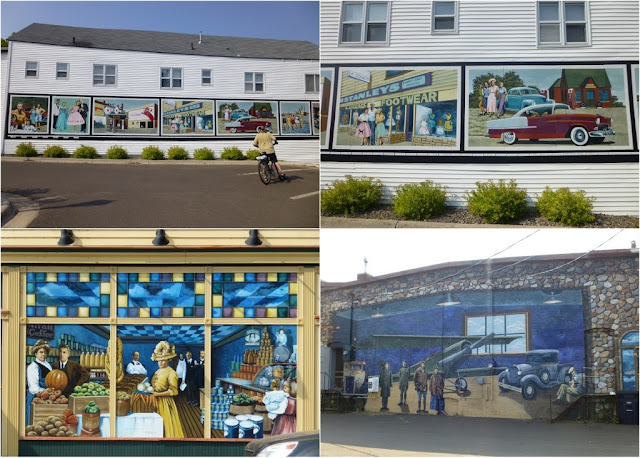 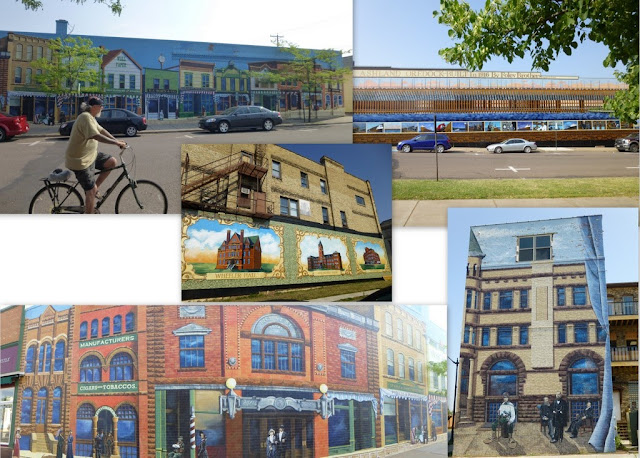 We made some new friends.  They were parked next to us our first night there.
We chatted and watched the sun set over the Lake together. 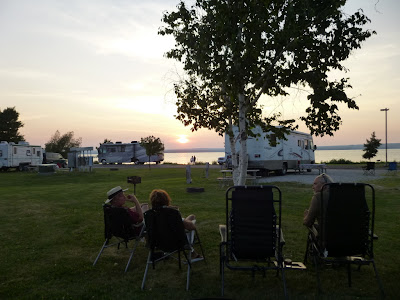 They were lucky enough the next day to score a lakefront site as soon as they saw the other RV leave.  That's one advantage of having a motor home over a fifth wheel... it would be too much work for us to switch sites like that, but no big deal for them.
How's this for a site?  You cant live much closer to Lake Superior! 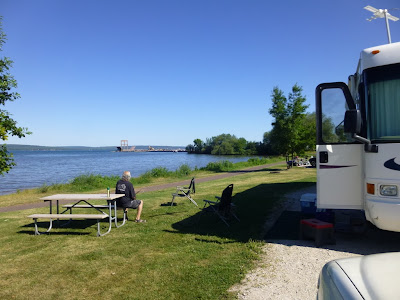 We put our kayaks in right next to there site.
The water was a bit rough, but lots of fun.
Fortunately, I had taken a Bonine (motion sickness pill) ! 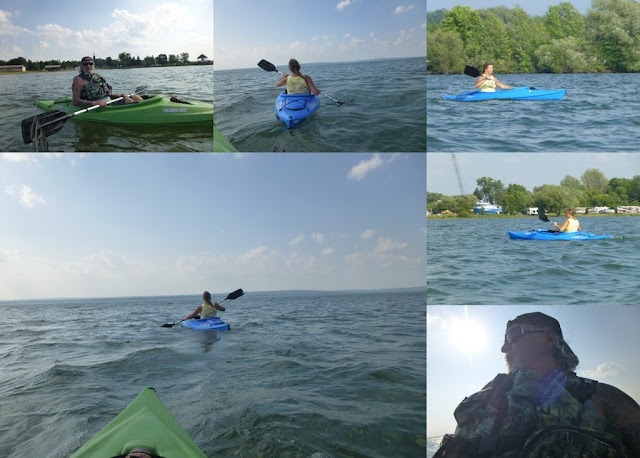 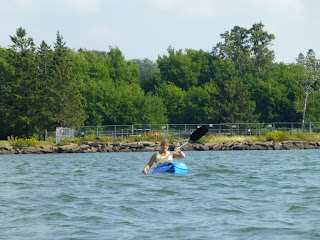 We're so glad we bought these Kayaks.  It really adds a lot to the adventure.  I still don't miss the motorcycle... with the bicycles and kayaks.  Of course, if you ask Jeff... he misses having a motorcycle, but he doesn't regret not having it for this trip.  and he never complains about it.
We enjoyed the Sunset and an evening of getting to know new friends,
both our second and third nights. 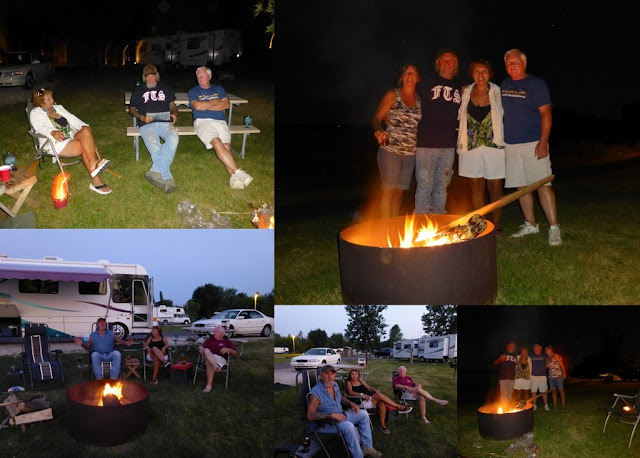 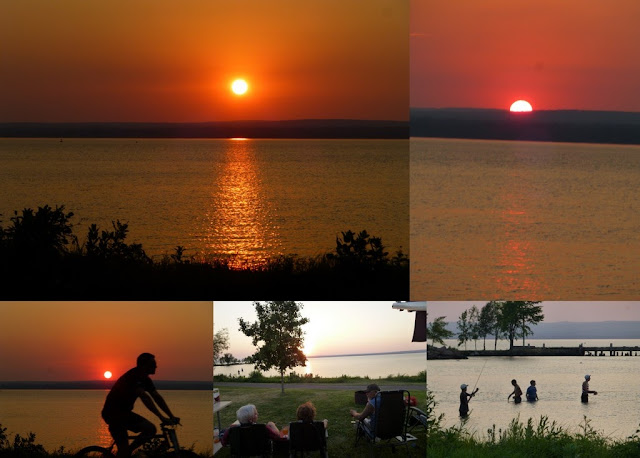 We said our good-bye to new friends, Bob and Betty, on Thursday morning.
They live 5 hours South in Wisconsin.  Now we have another invite! 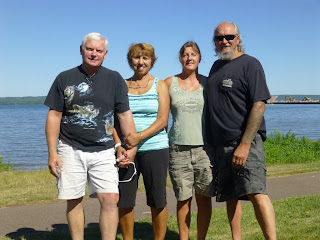 Thursday's travels took us into Michigan!

Marquette
Destination... Marquette's City Tourist Park
I had read that Marquette had 12 miles of paved bicycle paths...
and THAT was what made our stay there enjoyable. 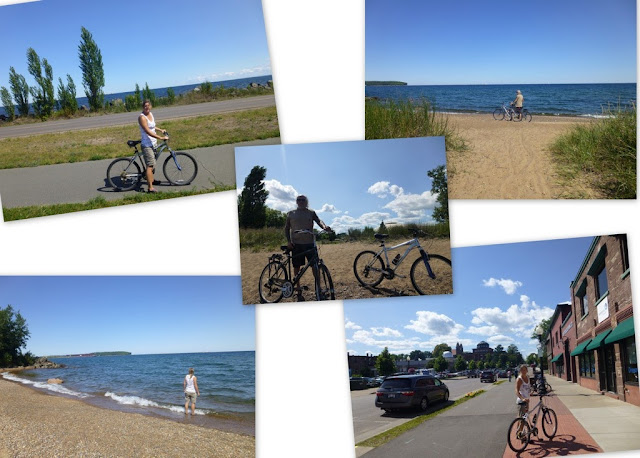 The park itself was not impressive.  The price was as if they thought they were impressive, but Not! 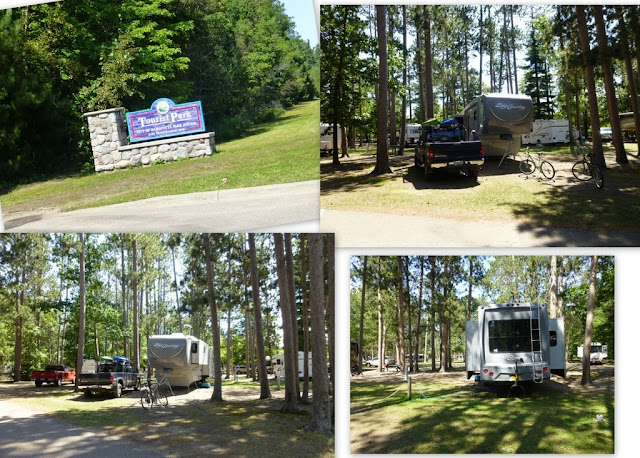 There were a lot of campers there, it was the weekend...  and perhaps for the locals who live in town, this is a great getaway in the woods.
But for a traveling RVer, this park was a pain.  Very Narrow TWO-WAY roads, low hanging branches, and NO Organization.  No markings for what sites are down what road, so you drive around trying to find your way hoping that no one else is coming the opposite direction doing the same thing... which there was!   Trying to reach the utilities that you are paying for was difficult.
BUT... we could ride the bicycles right out of the park to the trail and into town.  So we stayed.
On our ride into town, we had mapped out a stop at Ore Dock Brewing Co.  A very comfortable friendly brewery, where Jeff had their Reclamation IPA and I selected their Dreamweaver, after a few tasters. 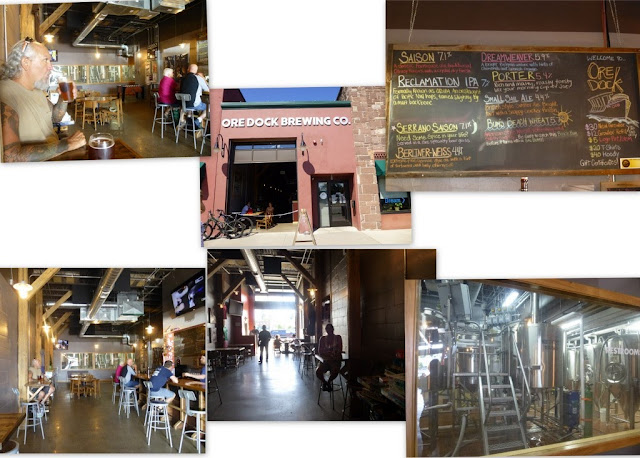 IF... you don't care about the convenience of riding your bicycle out of the park to the
bike path, there is a much better option.
Ojibwa Casino has about 10 more spacious wooded sites with electric... for FREE!﻿

Munising, MI
Our next destination, for Saturday, was Munising.  Munising had a Tourist Park as well,
and that's about all that is there, so that was where we were headed.
We were hoping that if they didn't have a site for us, we could stay at the Free Kewadin Casino Lot,  but their RV spaces were the size of a Camper Van or Truck Camper, so that wouldn't work.
Fortunately, the Tourist Park had a site available in their overflow area.  It had electric and water so we were fine, and had plenty of room, but it was uncomfortable where it was situated. 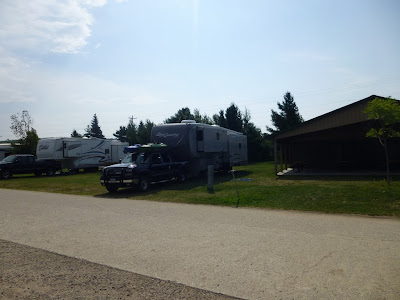 So we stayed only for the night, and headed out for our next destination this morning.
Grand Marais
The historic village of Grand Marais, Michigan is located on the south shore of Lake Superior at the eastern gateway to Pictured Rocks National Lakeshore.
Woodland Park campground is another City park, but a first come first serve park.
We arrived early, and were really happy to find an available site with plenty of space, 50amp Electric and Water... AND Cable.  Wow... we haven't had that in awhile.
It is a Lakefront site too...
but here that only means there are no more sites between you and the Overlook to the Lake.
There are stairs to take down to the beach.
It isn't far at all, but we probably will not carry our kayaks down there.
Next Post... all our happenings in Grand Marais!!
Posted by The Bright's at 7:22 PM