I DON’T WANT TO DO THIS ANYMORE!

Speaking of living in a home on wheels… Those were my words in the midst of today’s events.  It passed… in fact, when I said it, I knew I didn’t REALLY mean it… I love this lifestyle, but if EVER there were a time that I wanted to quit this lifestyle, it was TODAY!  We don’t do stress very well…  maybe because we’ve been away from it for so long.
This was the dreaded day that we had to get ourselves off the hill.  It’s been several days since we had hard rain, so we were hoping to get out without incident.  BUT… there was incident… after incident… after incident.  The mud was not our only concern.
We got our Swivelwheel motorcycle carrier while we were here, and we hadn’t yet pulled it behind the fifth wheel.  We had tested it behind the truck, and we had our concerns.  Yesterday we pulled the 5er off the stilts, so we could hook it up, but that’s all we could do.  The ramps we ordered to load the bike were too short… so we sent them back (after paying $40 coming and $60 going for shipping!!)   We ordered another set of ramps that we certainly hope will work, but we didn’t have time to get them before we had to leave, so we had to borrow the ramps we sold before we left last October. (funny huh?)
We weren’t about to attempt pulling the bike down the hill, so we were pulling the swivelwheel empty, and we would load our bike at a lot a couple miles down the road.  But even empty, we had some trouble.  As we backed up, the swivelwheel hit some mud and stopped, so as Jeff continued backing up, the platform continued to tilt, and tilted so far that the back was almost in the ground.  Our other new purchase was Motorola 2-way radios... so at this point I pressed my button and said "STOP!"  And Jeff stopped!  We put boards under the wheel, and it moved along from there as it was suppose to.
BUT then the truck got stuck in the mud... really stuck.  So after much contemplation, we decided maybe we could dig ourselves out.  So we dug down in front of the tire, then we laid bark in front of all the truck tires... then boards... FINALLY, we did get out!!  But we were off of the planned route out of there, and had to move to plan B (which wasnt actually a plan B, it just became plan B... we didnt have a plan B.  Plan A was suppose to work!)
Our new route took us back further on the lot, then down the hill at a different point.  As the truck started down the hill, the front of the fifth wheel got closer and closer to the ground.... and again I said "STOP!".   The front jacks were digging into the ground and digging deeper and deeper, and they werent going to dig themselves out... so we had to!  We dug a track, but then as he moved forward it started digging in again, so again I dug. 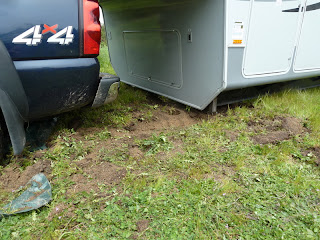 Finally we were clear and Jeff was on his way down the hill. 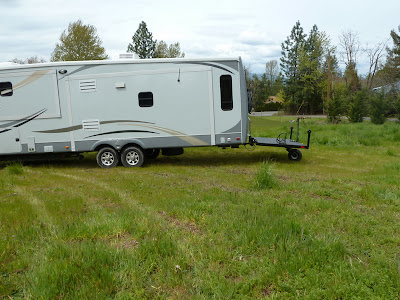 He made it onto the driveway, and pulled out in the street so he could straighten out and back up so we could load the bicycles and make an official exit.  Again, the fifth wheel shifted and slammed forward.  It had done this earlier a couple times, and we had continued to fight with it.  We have a sliding fifth wheel hitch, and it was doing its sliding thing!  They had taken the fifth wheel hitch out to load things in the truck, and evidentally it had come unlocked, and now it seemed we couldnt get it to lock in place. 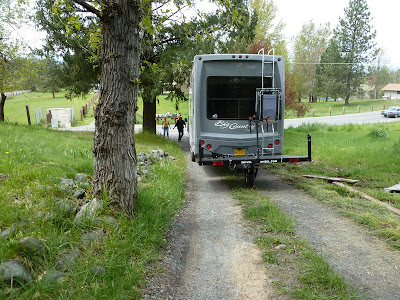 We loaded the bicycles and pulled out.  Jeff drove the truck and Ginny and I followed in the car, so we could come back and get the bike. 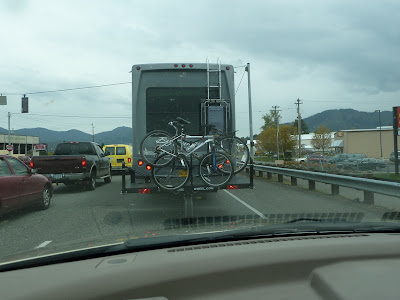 The plan was to take the Ultra Classic and its too big for me to attempt to ride.  But by the end of this ordeal, Jeff and I were both stressed, and nervous about hauling a heavy bike on this Swivelwheel for the first time.  So we decided to take my Heritage Softail instead.  The original original plan was to pull the "bagger" and I would follow on my bike.  But the WEATHER has been awful, so I wasnt going to ride through rain and snow and be miserable.  Now we will ride back when the weather is better and  get the other bike.
So with the sudden change of plans, AND the fact that it had started RAINING on us... the simple plan to go back and get the bike, wasnt so simple any more.  Now we needed to make sure we got what we needed off the bike we thought we were going to take, and get the things that we needed for the bike we were taking, and the battery was dead, and both were wet, and how was I suppose to carry all this extra stuff on the back of the bike?
Okay... time to stop sniveling.  We did make it out of the mud and down the hill and to the lot and we did get the bike and I did carry the stuff, and we did get it loaded and tied down, and we are on our way to Prineville, Oregon for our first camp host job of the Summer. 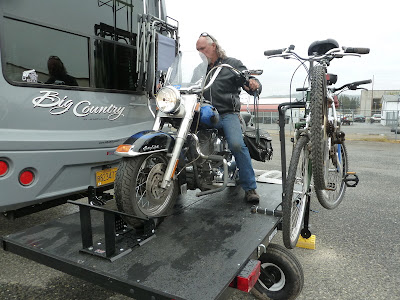 I rode in the fifth wheel, watching how the swivelwheel handles for the first 10 miles.  I'm glad I dont have to watch it all the time, because its alot easier when I dont know what its doing back there.  It is fine Im sure, its just scary to watch as it bounces around. 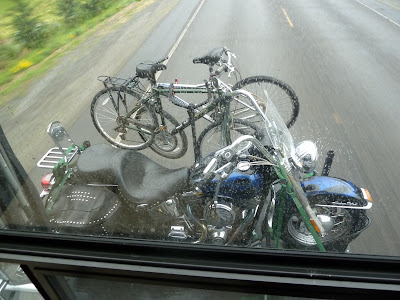