Will I EVER Blog again??  That's what I'm starting to ask myself! 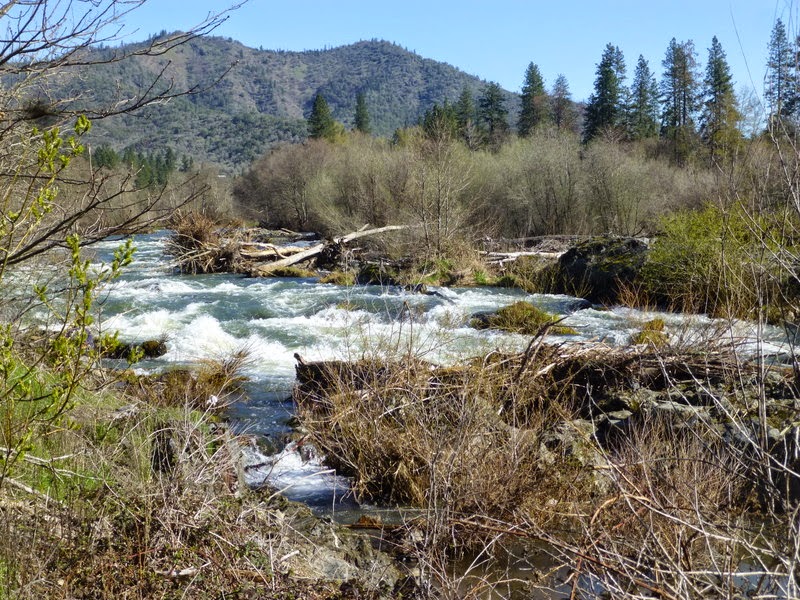 \
Let me try to do a whirlwind recap of our past 2 months.
We spent February and March along the Rogue River in Southern Oregon.
For the month of February, we played Camp Host at Valley of the Rogue State Park in Rogue River, Oregon.  It wasn't real busy this time of year, so there wasn't a lot of camper interaction.  But our responsibility also included the day use area which is a Rest Area on I-5 so that was the majority of our work.

We had time to spend with family, which was the only reason we were there this time of year.  The weather was rainy and colder in February. 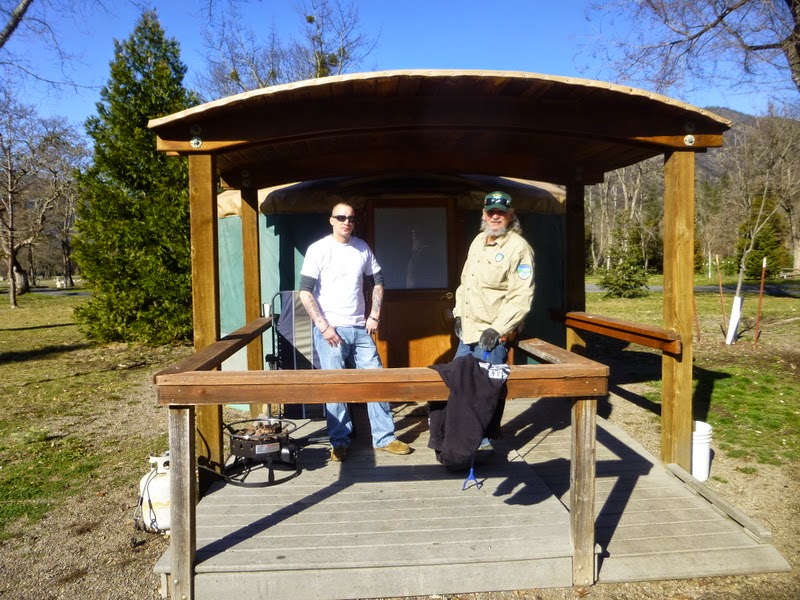 We were able to get Jacob, Jeff's oldest son, down to visit from Madras.  Normally he could get a ride, but this time of year we put him on Greyhound. 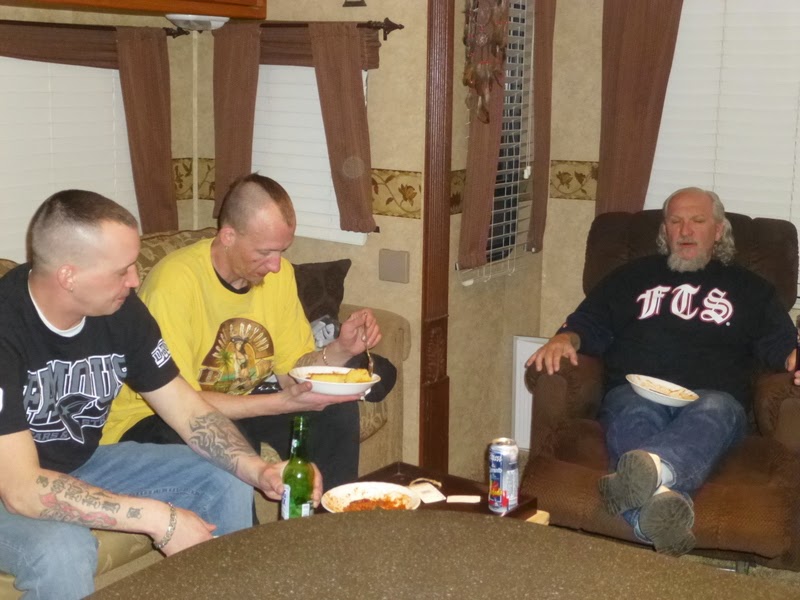 We rented a Yurt at the park for both Jacob and Jonathan, so they could both spend time with us... or each other and their Dad. 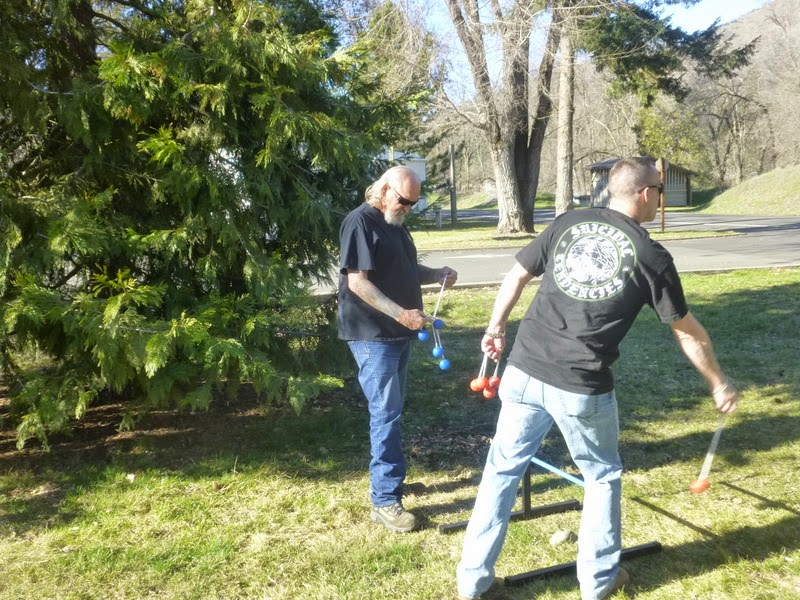 Actually, I just provided meals and tried to keep everyone happy. 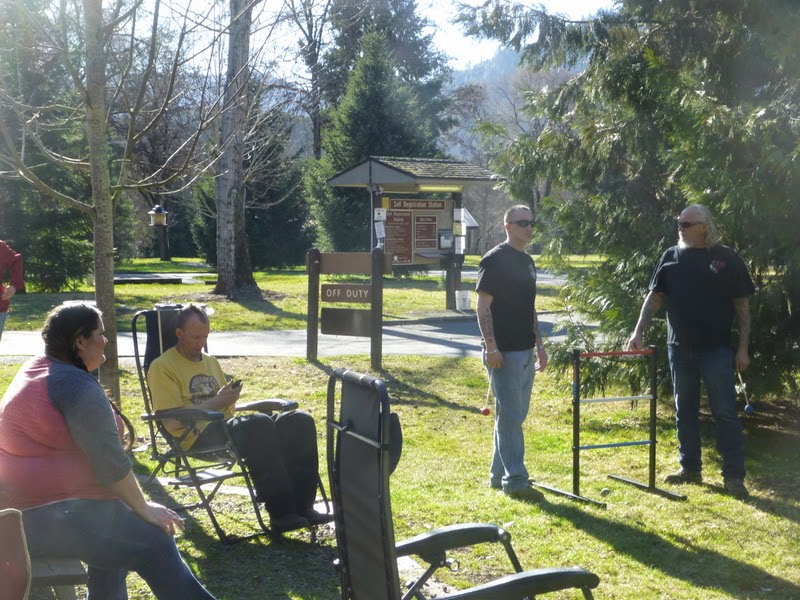 And, Yes, we got our ONE remaining Harley (which is really MY bike) out of storage at our friends place. 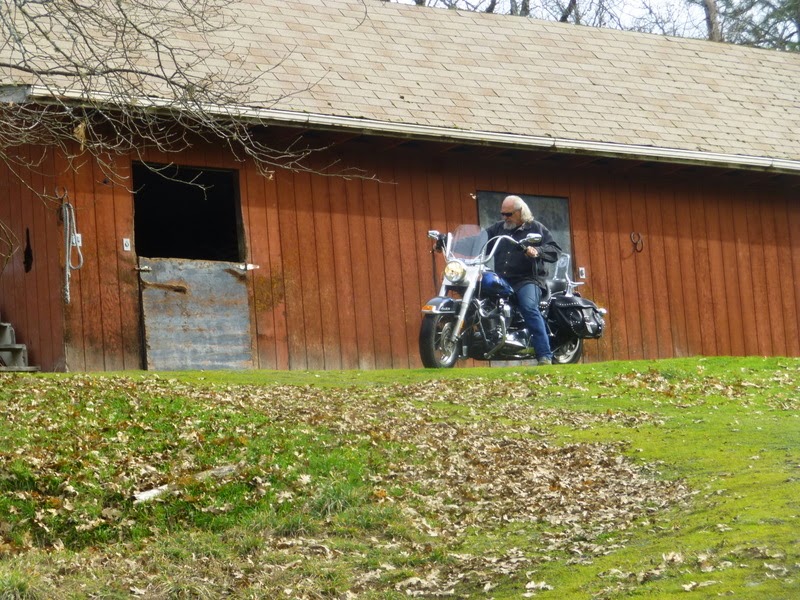 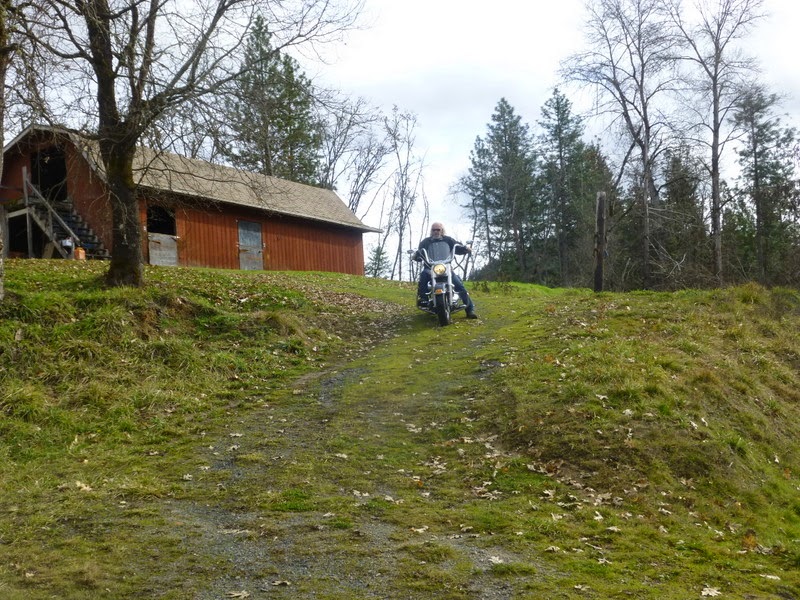 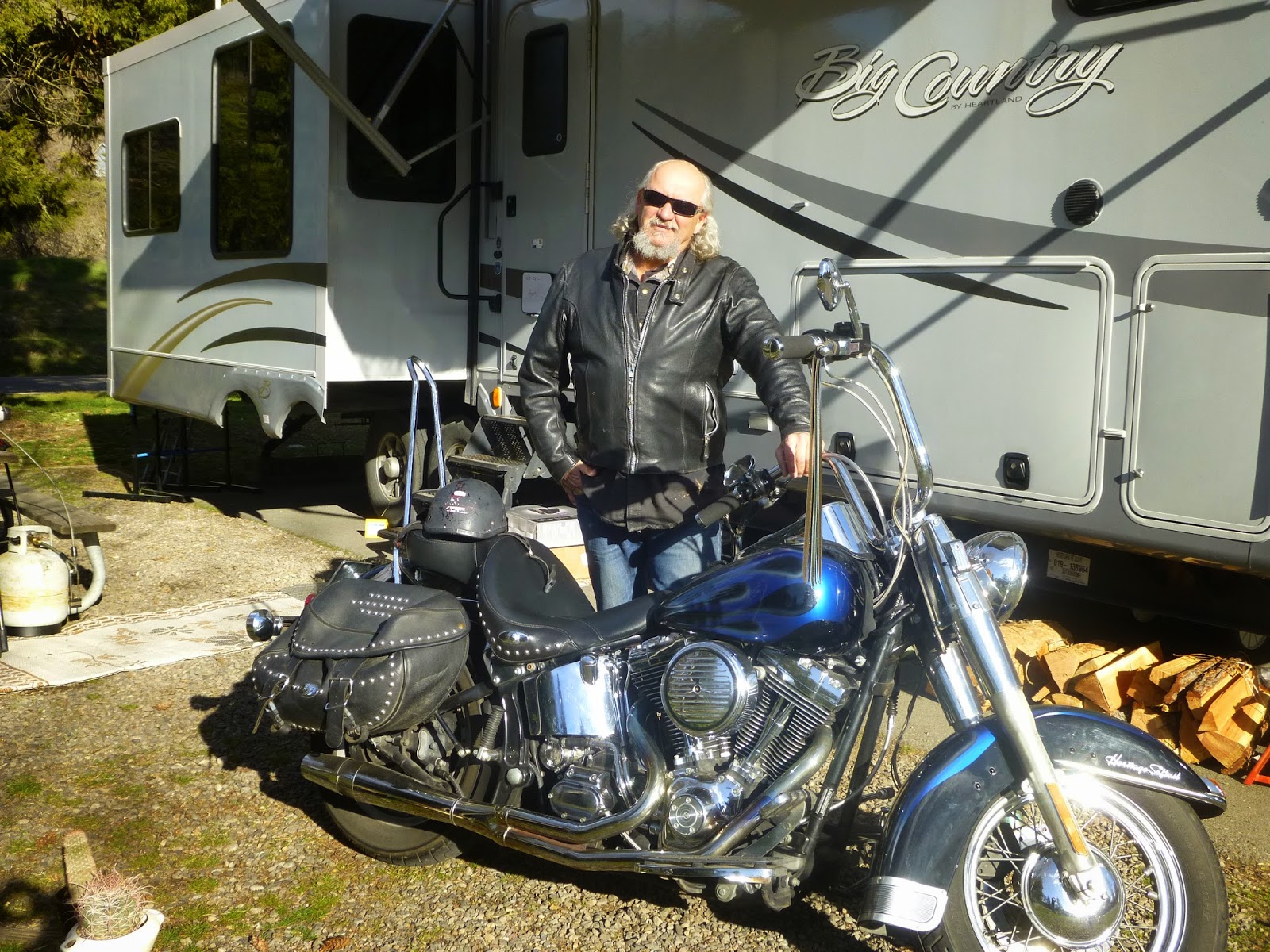 We rode a few times, while at Valley of the Rogue SP... Two Up (me on the back) and it was enjoyable. 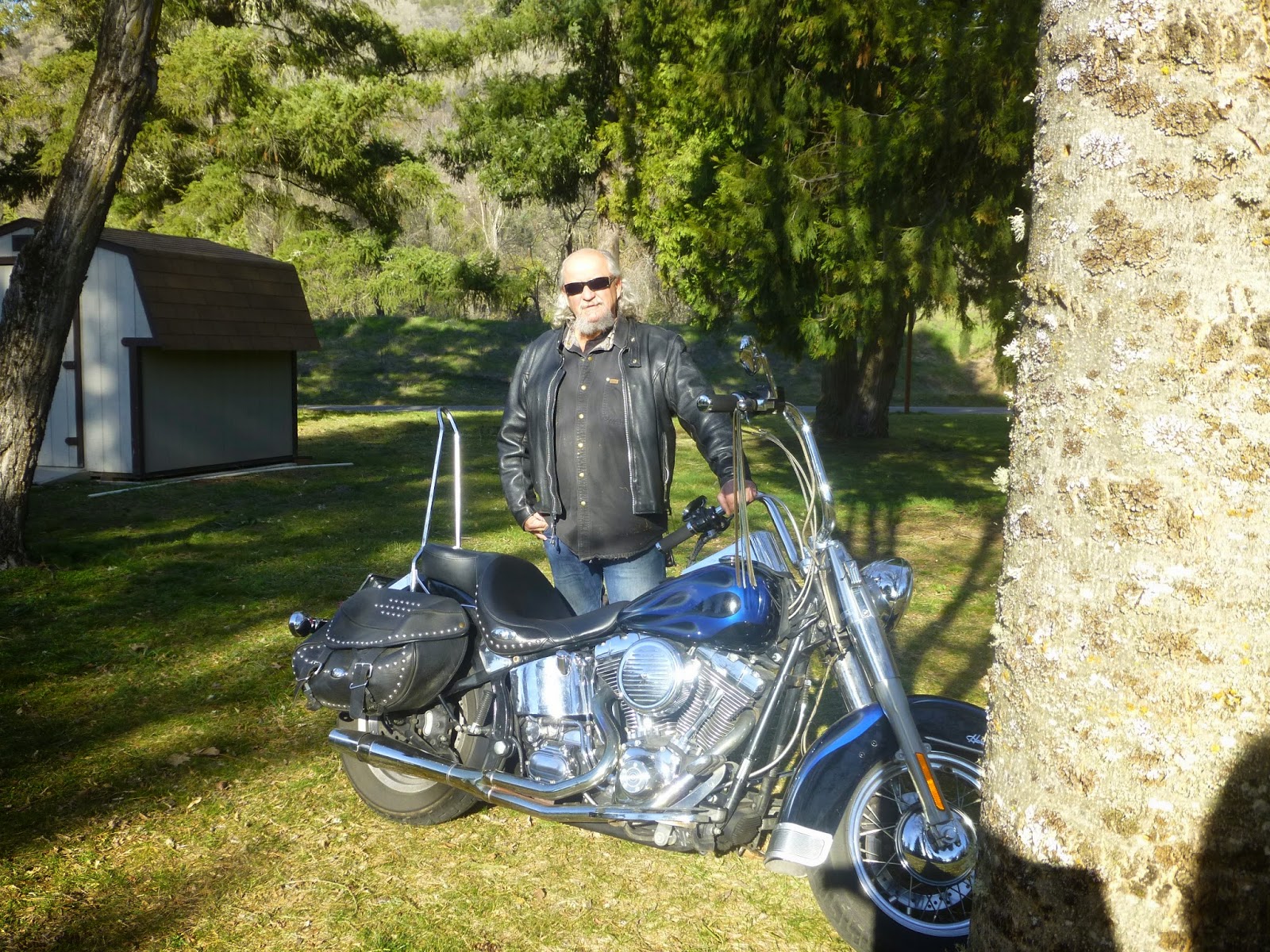 We had agreed that this Harley would become Jeff's bike now... so he decided it needed some changes.

He found a Sissy bar and 16" Ape Hangers on Craigslist. 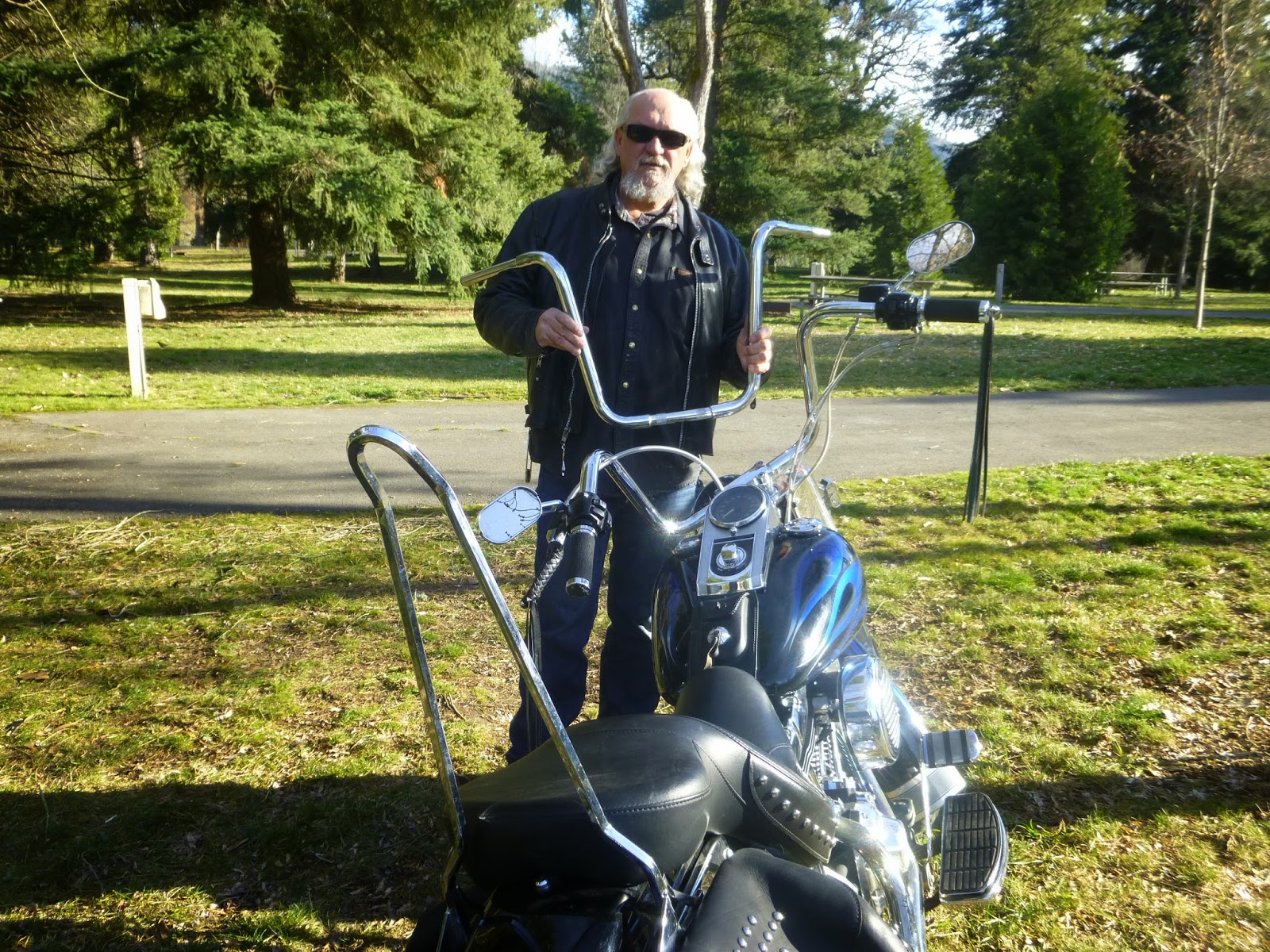 BUT when we moved from Valley of the Rogue to KOA in Gold Hill, I rode my bike.  That's all it took!  I wasn't ready to give up my bike yet.

Lucky for me... he hadn't yet changed out the new parts.

SO... we looked on Craigslist for another bike, and we found one! 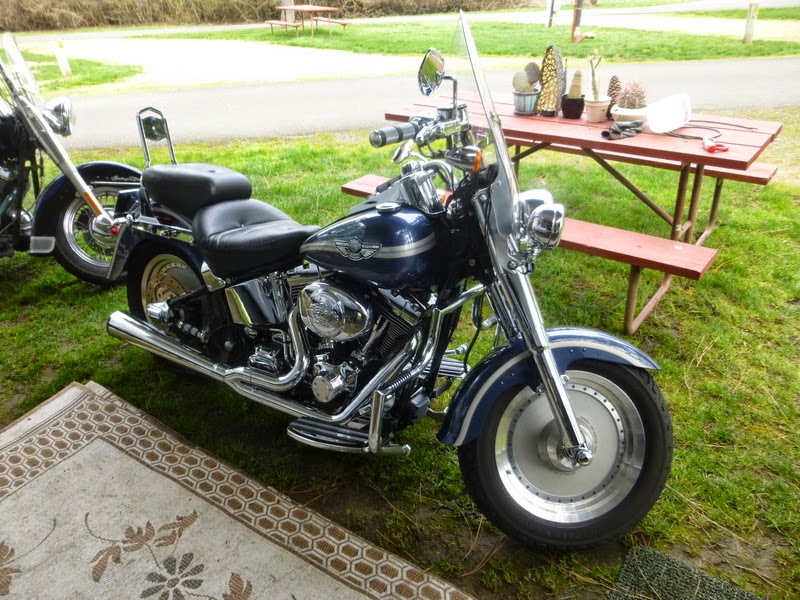 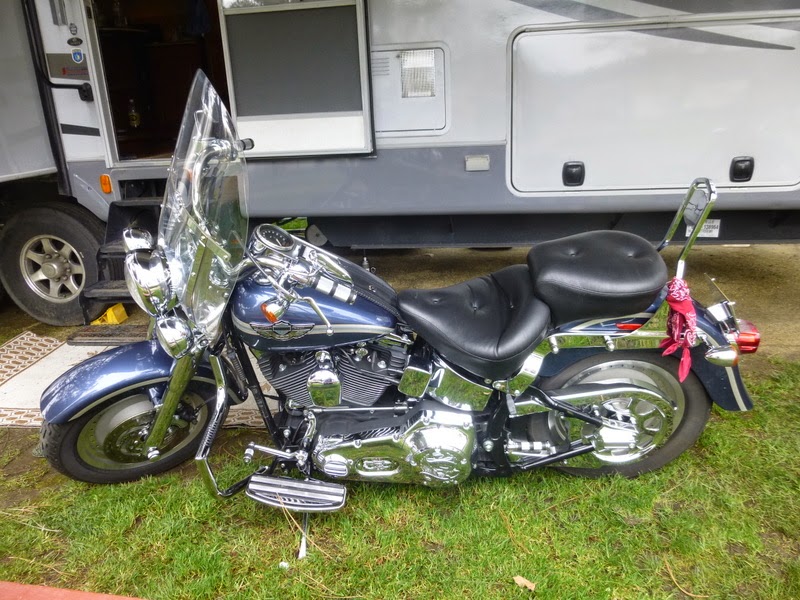 He hates the seat... its just not him.  Its comfy for driver and passenger, but not the style he is looking for.

He also removed the saddlebags and crash bar, right away. 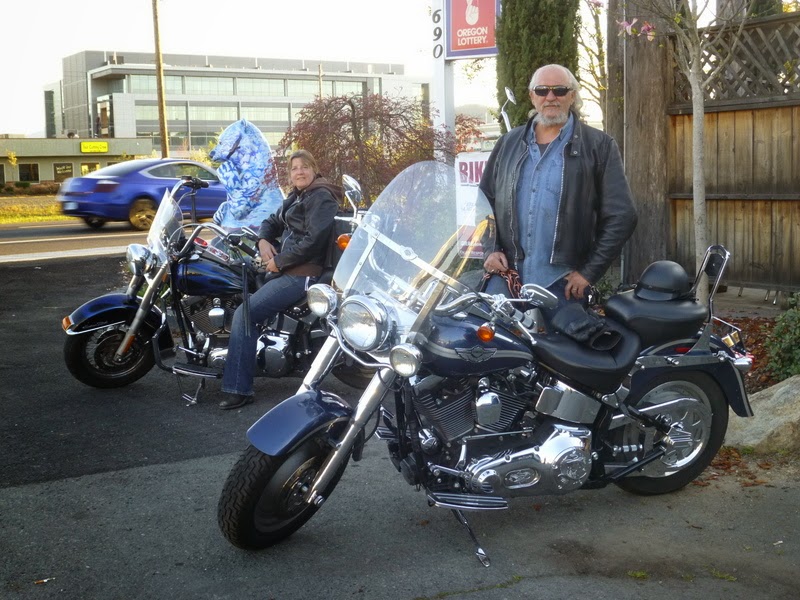 So now we have His and Hers Harley Softails again. 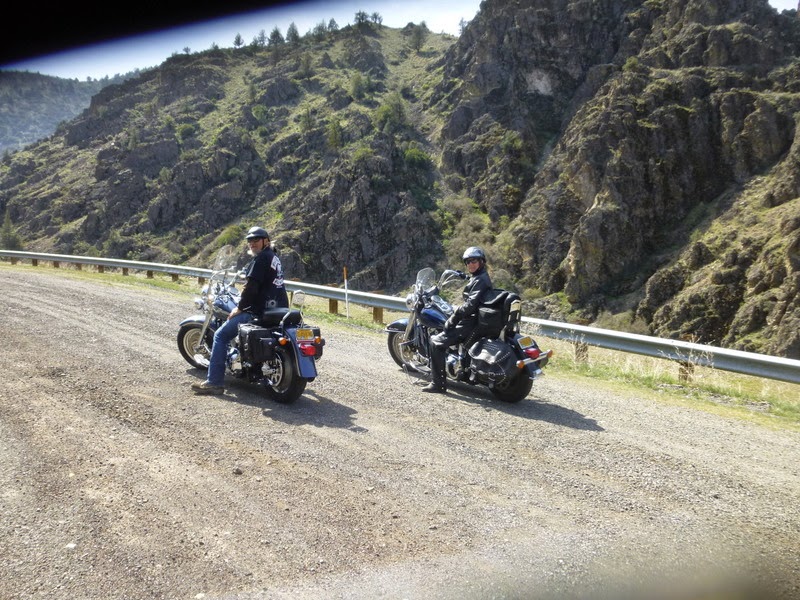 It is fun to ride together again!

Grants Pass is our home town... its where we own our house, and where we had lots of friends.  I say "had" because we just don't see them anymore... and there are very few that we are in contact with. 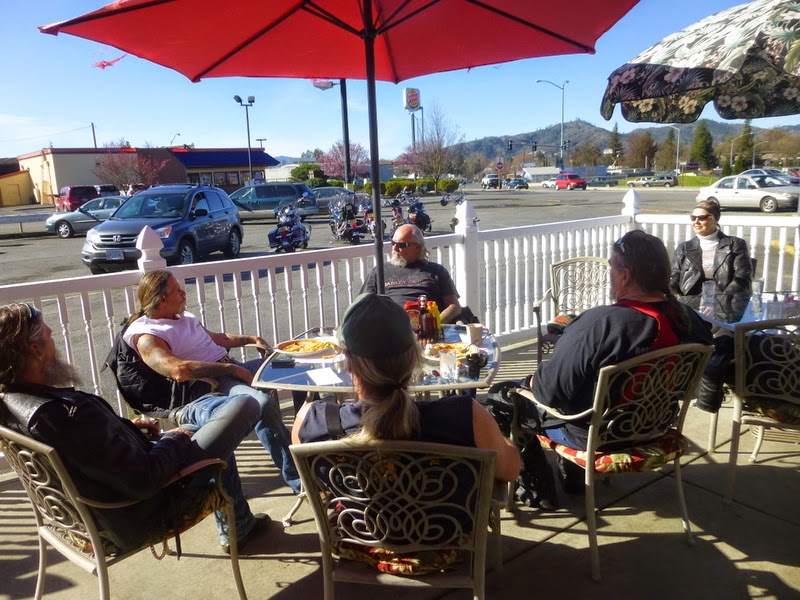 We stayed in contact with people for the first 6 months or so, but then as full-time RV'ing became our life, we started making new friends that we kept in touch with.  RV life is a different life style, and we find that we relate more to other RVers.

But we still have that "biker" side of us too, and Jeff has a lot of biker buddies from his club days and from our home in Southern Oregon.  So it was really great for him to get together with a few of them. 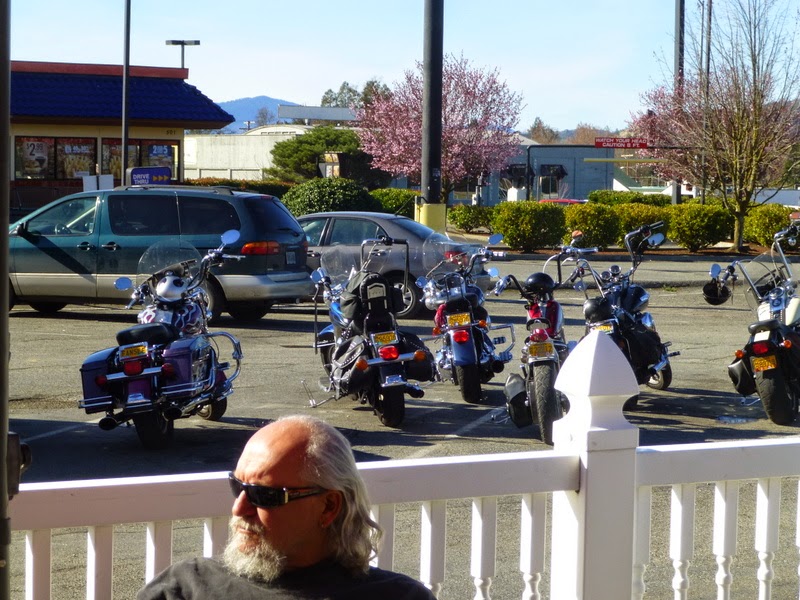 After the camp host gig at Rogue River, we moved on down the road to the KOA in Gold Hill, for the month of March.  No work there... just Play and PAY.  Im good with the Playing part... but the PAYing part, not so much. 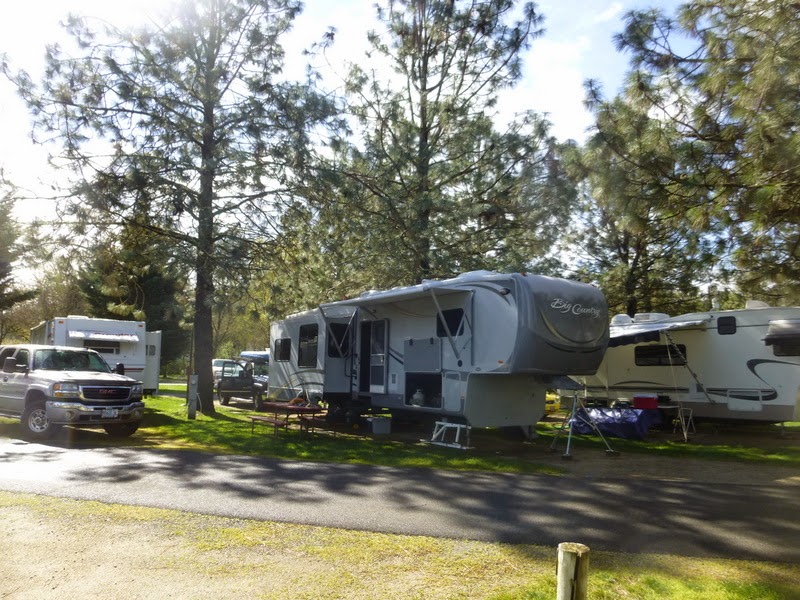 It's also on the Rogue River. 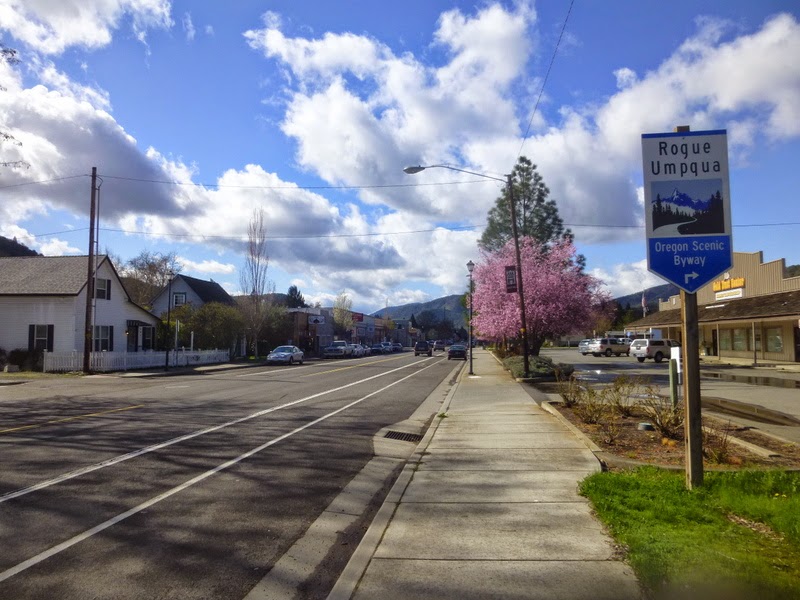 We walked nearly every day... and walking every day for over an hour, is the only thing we have found that proves to take a few pounds off. (but they don't stay off if we stop walking) 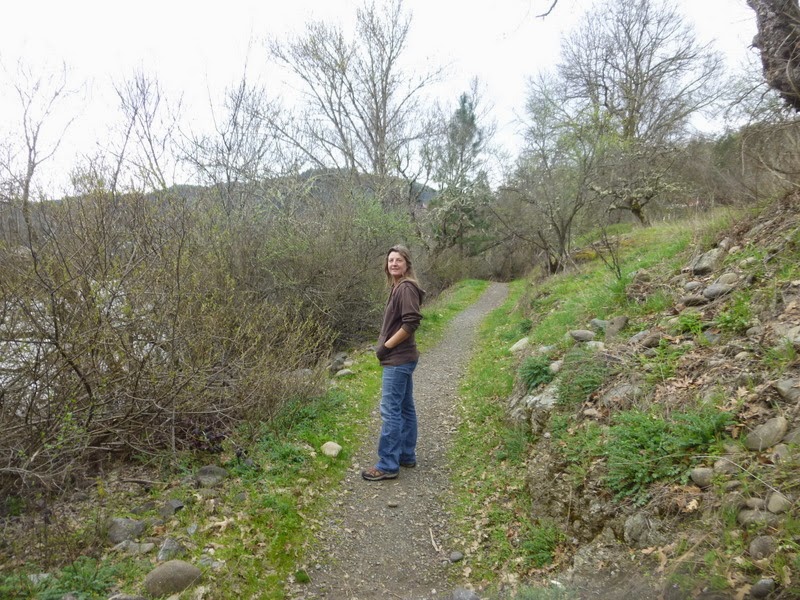 There are some great walking trails along the Rogue River out of Gold Hill,                but its about 1/4 mile to the trail, and walking along the road is not fun... and feels a bit dangerous.  So after walking it a few times, we opted to ride a motorcycle or take the truck and parking at the trail entrance. 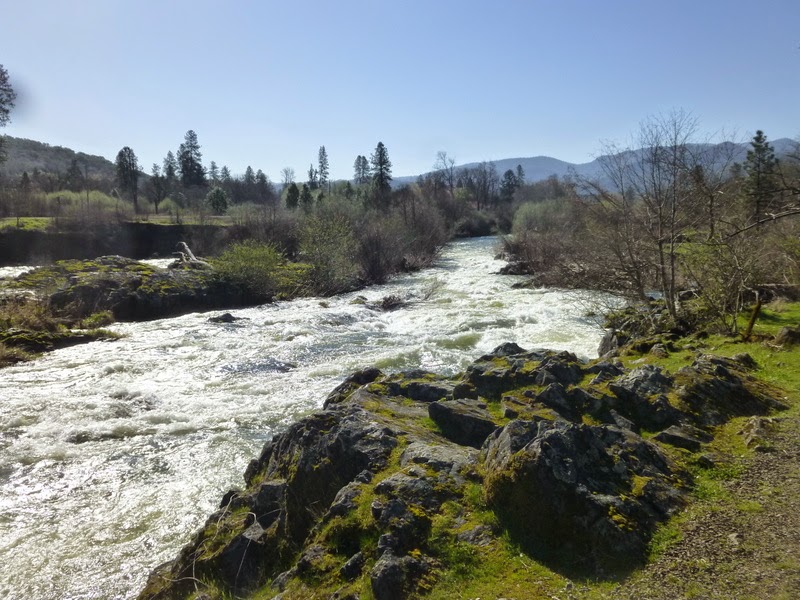 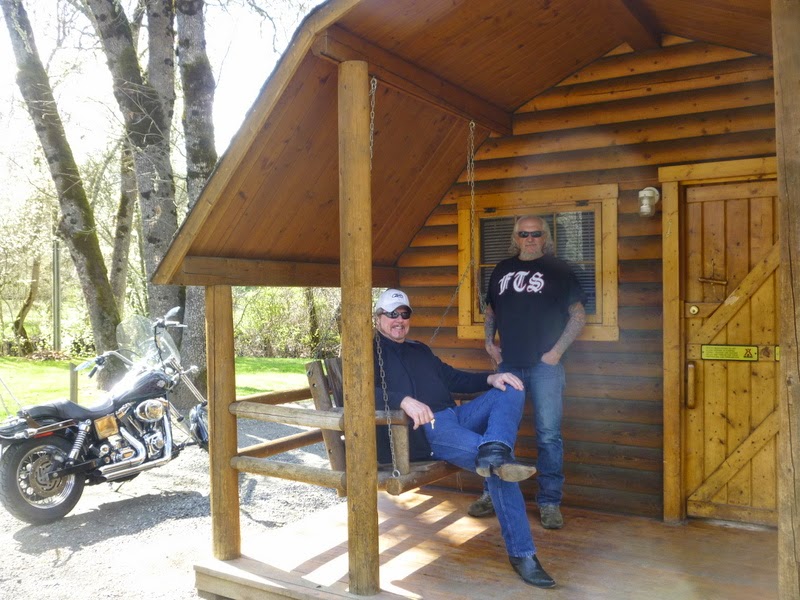 Jeff's Cousin, Chuck, rode his Harley down from Portland to see us, and stayed a few nights in one of the KOA cabins. 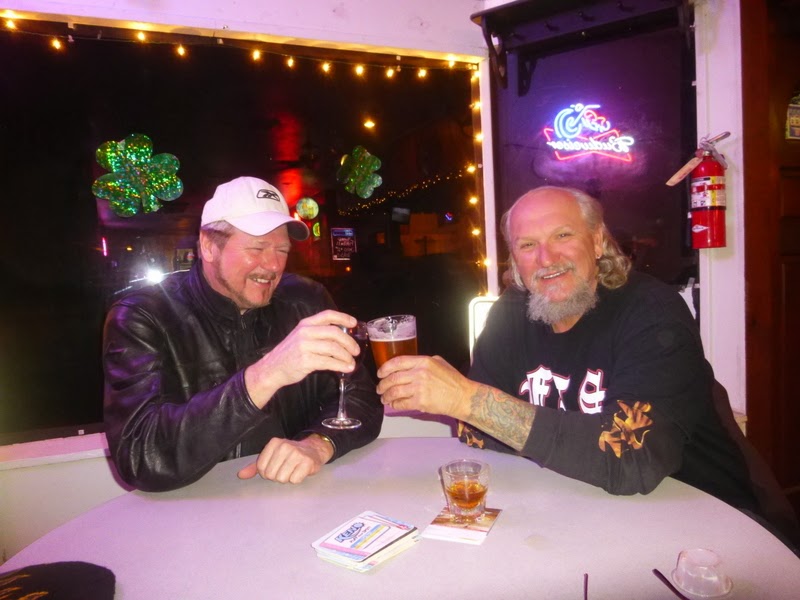 The three of us had a great time together.  We hadn't seen Chuck in almost 2 years... because of all this traveling we've been doing! 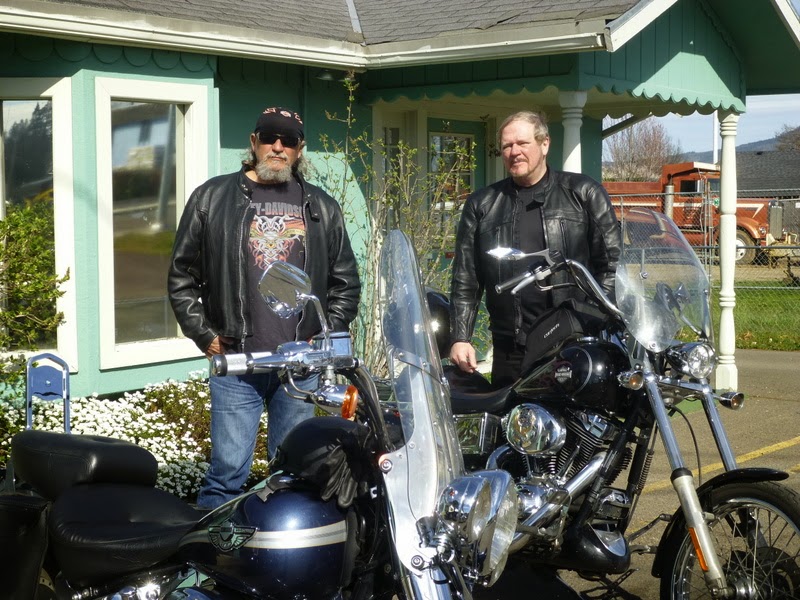 Staying in Gold Hill, we were even closer to my parents house,
so we were able to spend more time with them. 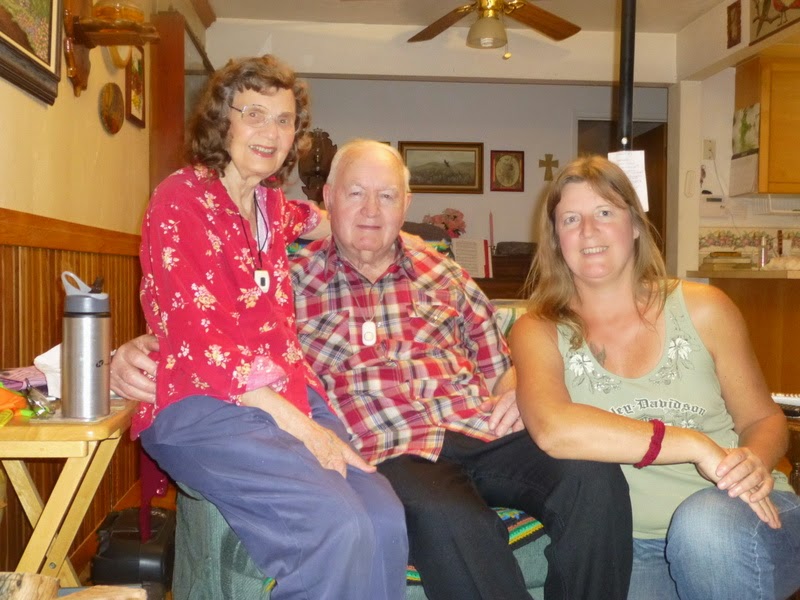 I know there is a lot more I should be saying, but this is getting ridiculous!
We left Oregon at the end of March, and  I'm still trying to tell about our time there!
We are now more than 3 weeks into our job in California!
So I am going to leave it at that and publish this post.
The next post will be about where we are now!  and hopefully soon.
Thanks to all of you who check our blog!