Sally and Richard were the first to greet us when we got settled at our site.  Sally has kept us informed with changes at the park since we left, and after their grandson, Roman, was born, she has kept us up to date on him too. 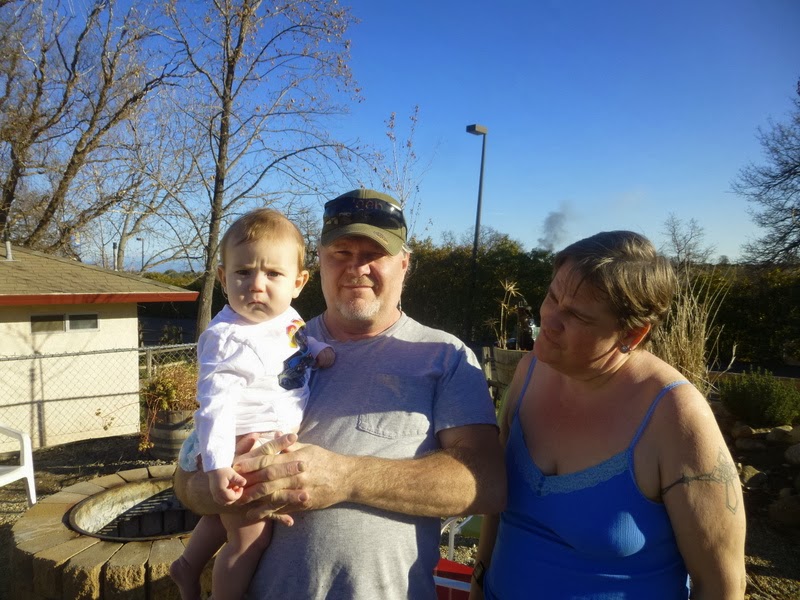 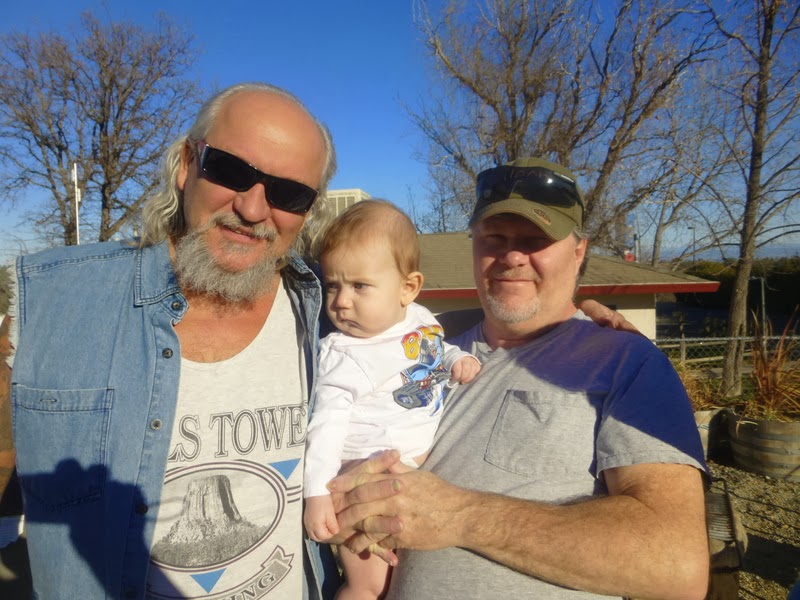 What a cute little boy.  Doesn't say a lot... but has some great expressions! 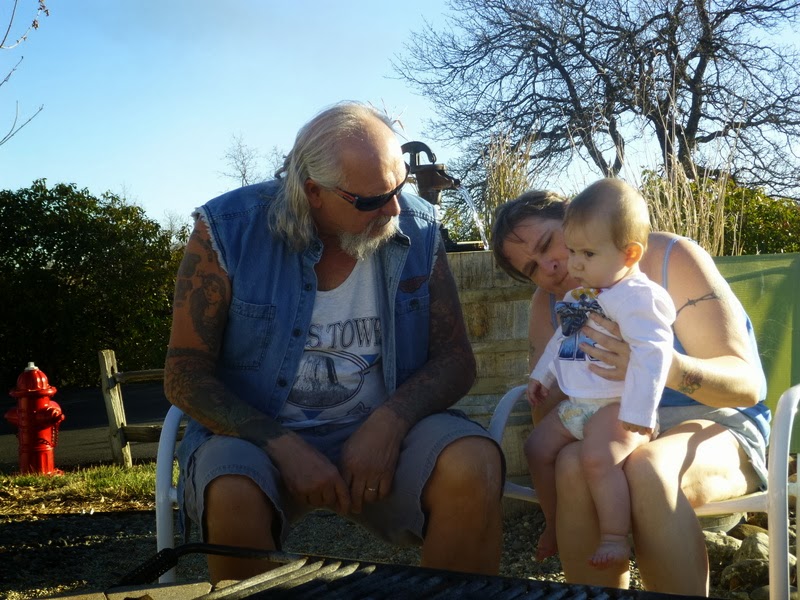 One evening we enjoyed a fire and some "catching up" with some of the people at the park. 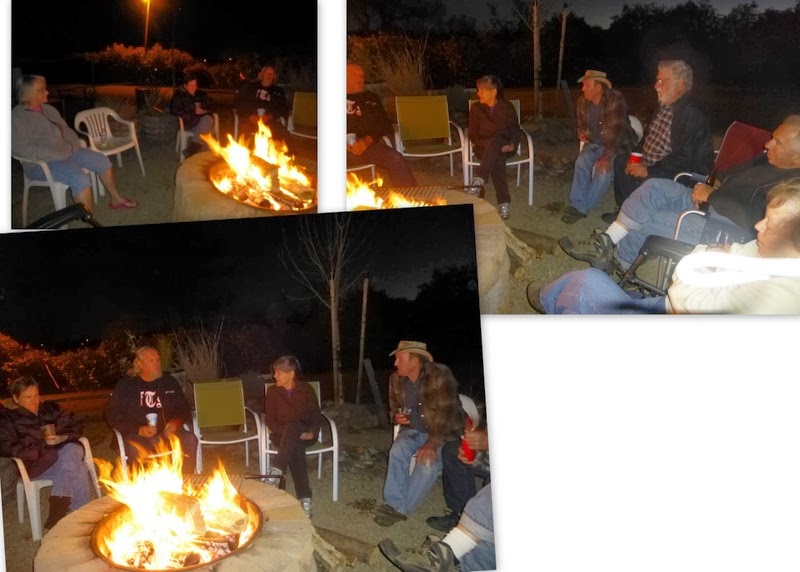 We were surprised at the greeting we received from people at the park.
They made us feel loved!
Look at this... Melanie even left us this bottle of Wine on our table.﻿ 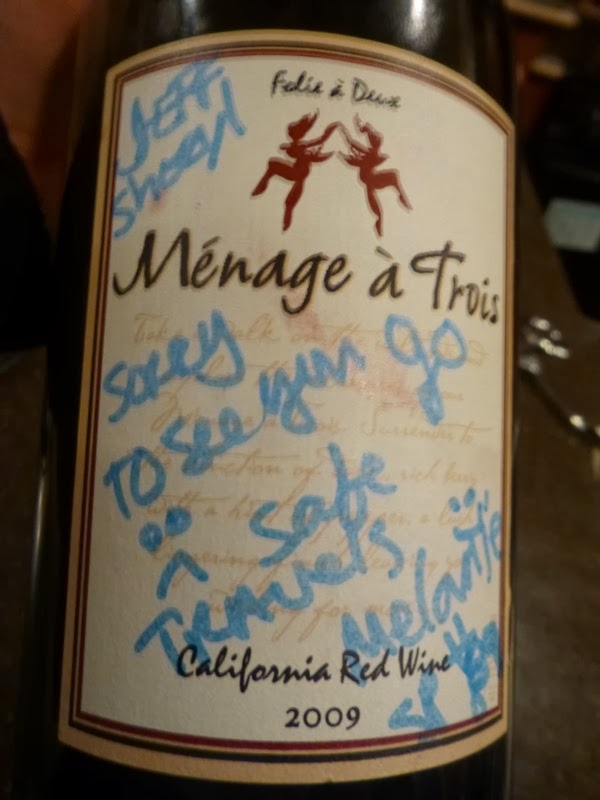 It was time to say good-bye to Norma and Rick again... They certainly have the park handled.
We enjoyed a good time with both of them.

This is Norma... Rick was out and about I guess. 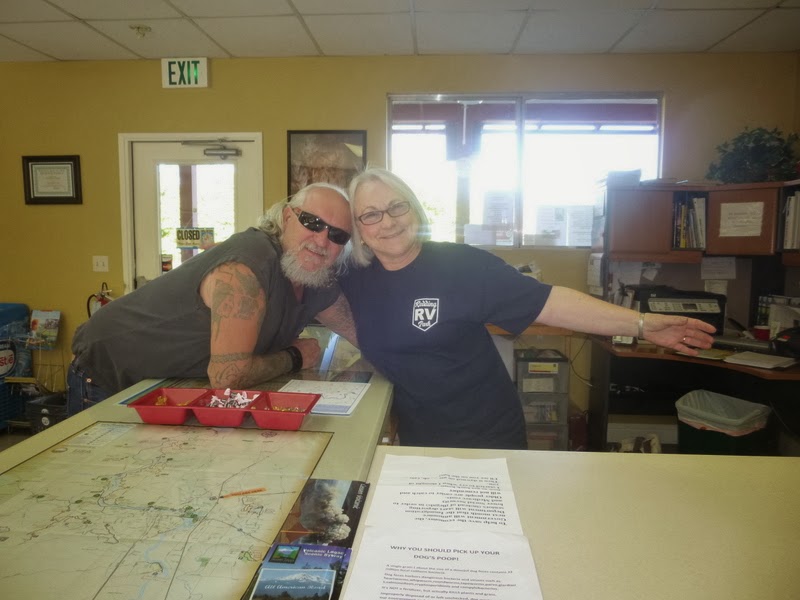 Tuesday we made our way back to Oregon.
We still own a home here in Grants Pass.  We've rented it out since moving out 4 years ago, and we are very fortunate to have a young family in there now that takes care of the property and pays their rent on time.  We were thrilled that they want to renew their lease for another year.

Stuff
Like most of you... we still have some STUFF we left behind.  So when we're in town, we make a trip to our storage unit to remind ourselves of what we have... and offload stuff and onload stuff. 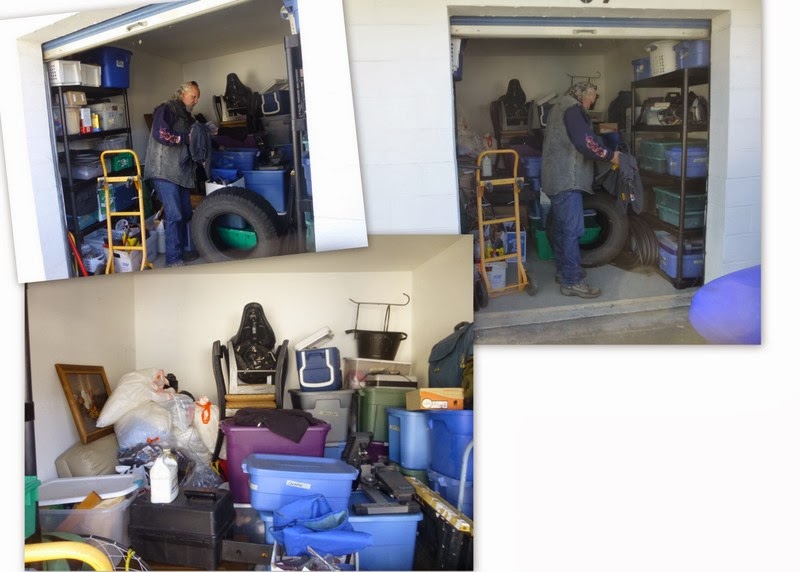 Our first stop after crossing into Oregon was to my parents home in Medford. 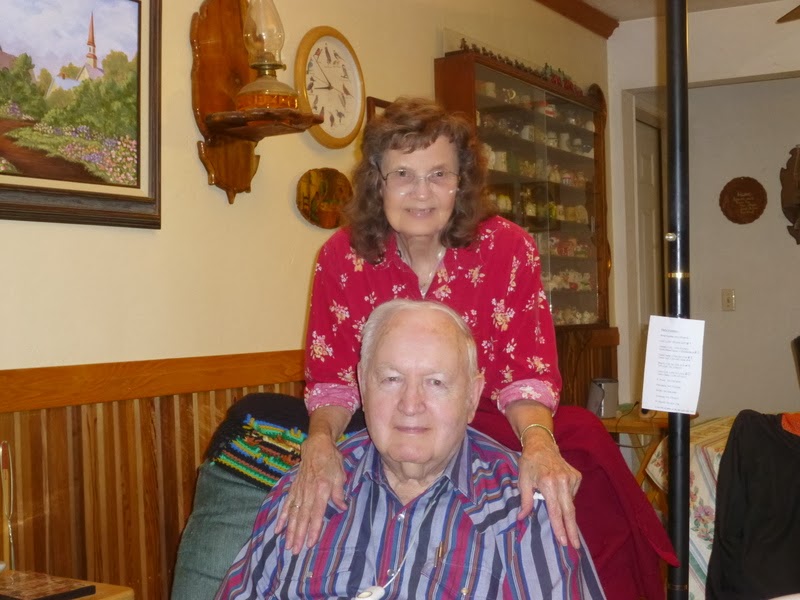 The plan was to park our fifth-wheel on the street out front of their house for the night.
But it was one issue after the other and it was clear it wasn't going to work.
So after a wonderful Mom's home cooked dinner, we moved on down the freeway to
Valley of the Rogue State Park.

Jeff's Son, Jon, also lives here in Medford.
Jon and Brooke came over the evening after we arrived.
It always feels good to know the gifts we bought were "right on" 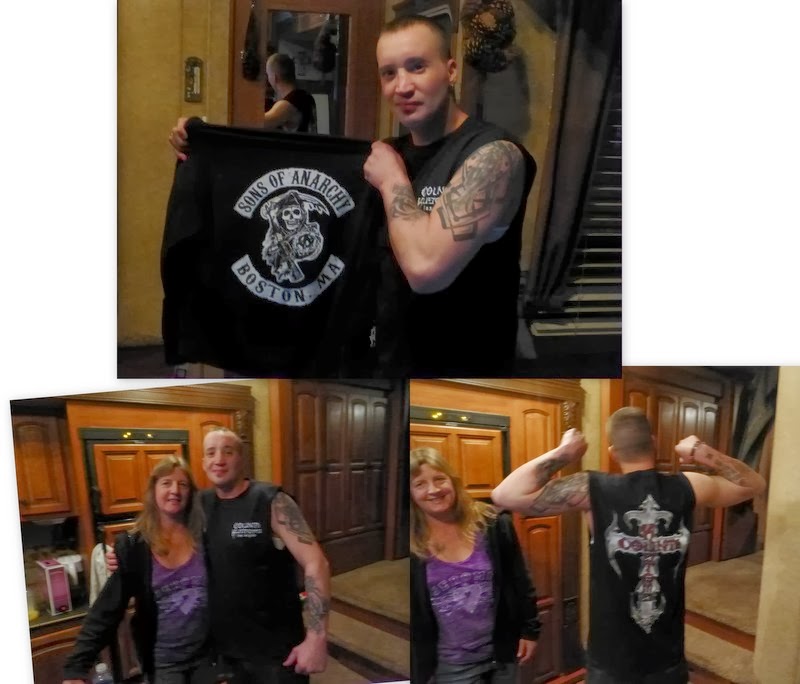 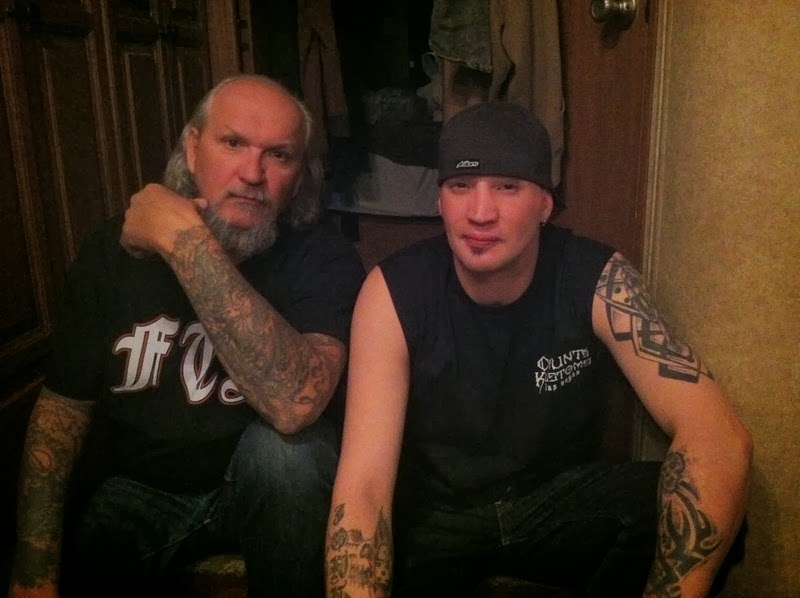 We hadn't planned to do any hosting in Southern Oregon, but we had inquired, so when they had a cancellation they contacted us.  So here we are hosting at Valley of the Rogue SP in Rogue River. 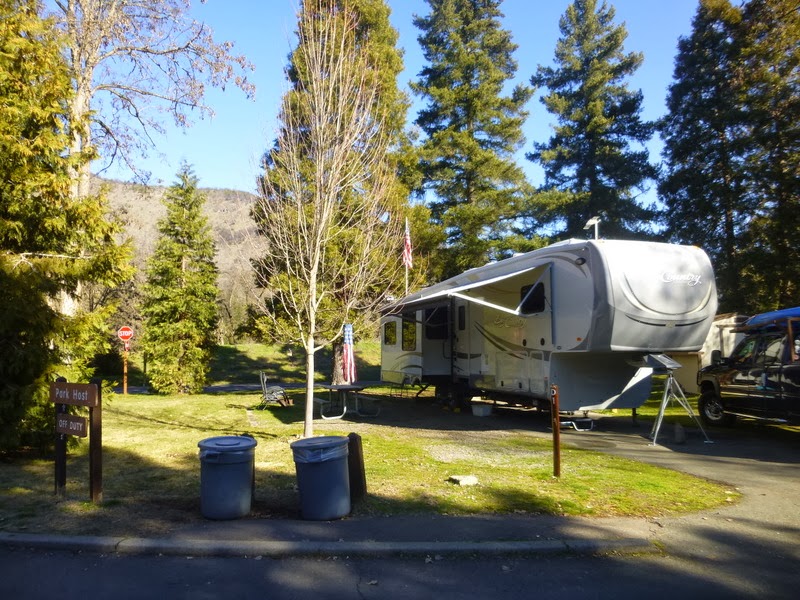 Its good to be doing something again.
But so far we're a bit torn with the expectations surrounding us.  Some of the expectations we have put on ourselves, I'm sure... but family is what we're here for. 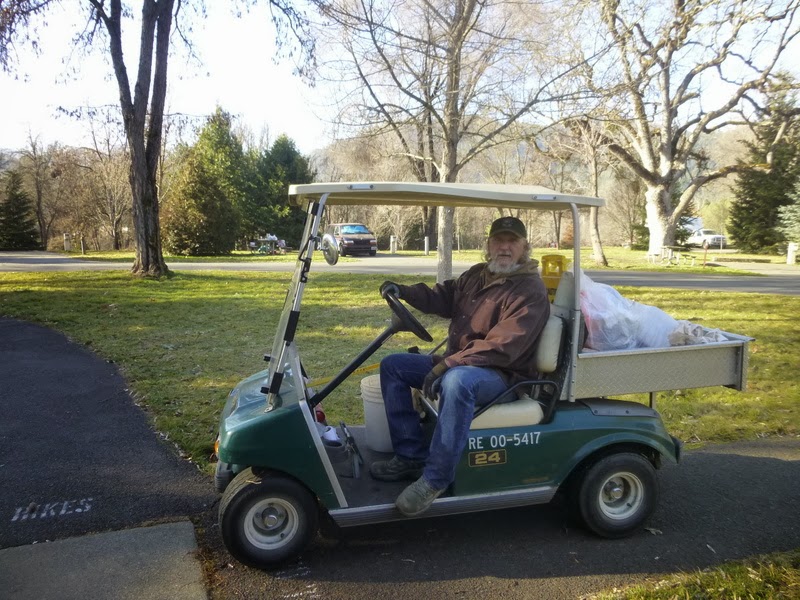 Jeff really enjoys having a campfire.  There have been many times over the past several months that we couldn't have a fire, for whatever reason.  So we bought ourselves a propane fire pit.
Its not quite the same, but it cures the craving.﻿

They don't give us free firewood at this park, which is unlike the other State Parks we've hosted at and doesn't seem right... but its the way it is here.  So we took advantage of all the fallen branches from the wind storm the other night and made ourselves a free fire.
We don't need their stinkin' firewood! 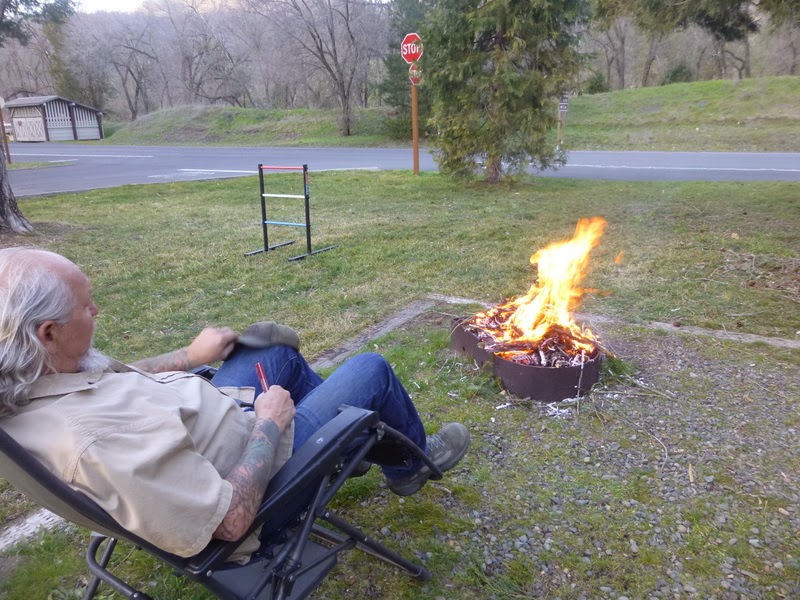 We were dreading coming back to Oregon so early in the year, but for 2 days so far, we had incredibly sunny warm weather.  It wont be so bad.
Hopefully tomorrow we will get our motorcycle over here!
Take Care All... Thanks for reading.
Posted by The Bright's at 9:08 PM