We finished loading our lot trailer today.  We had to call in experienced help, because it wasn't going to fit the way we were going.  Actually, it would... because it did... but we needed more muscle to git'r'done.
Now all we need to do is a little remaining clean-up on the lot... not much... so we should be done with the clean-up in the morning.

We sold 756 trees, and had only 5 tabletop Noble trees left unsold.   We dont think we did too bad.  I guess we will know for sure when we get paid!!

This morning, we slept in... after going to bed early.  We may be tired for awhile.  We did more real work in the last 5 weeks than we did in the last year... or two... or five.
We had planned to go to Crossroads Church, where John Hagee is pastor...but we got a phone call this morning telling us that help was on its way to help us load our trailer, so we didnt make it.  Possibly next Sunday... I think we will still be in the area.

I had to go out for a few things this afternoon, and we both will sure be glad to get out of this San Antonio traffic.  Its insane!  Its not like they are angry drivers with road rage... they're just mindless.  Its like they get in their car, disconnect their brain, grab the steering wheel and step on the accelerator!  Everywhere we go its like we just merged onto a race track... where anything goes!

This Christmas was definitely different than what we are used to...  but its all good.  The whole Christmas season was focused on getting everyone else their Christmas tree, and when Christmas day came, it didnt really seem like Christmas.

Instead of getting up and putting the turkey in the oven and starting the other fixins, we got ready to go to the Holiday Hills Christmas Party.  We had a heck of a time getting there... it was about 25 miles away in the downtown area, and we havent been out of our local vicinity since being here.  I did my usual mapping while Jeff was driving, but we did a few... "take this", no, that was wrong, "try this".

Right before we finally found it, Jeff was ready to give up and go home.  But we made it and we had a good time.  They had rented the Lounge, and it was open bar, so we all relaxed and had fun.  There was a gift exchange, and the gifts we bought for the names that we drew, were the only gifts we bought this year.  For both the guys names we drew, first we bought an Oregon beer...but Jeff drank the beer.  So we bought lottery tickets... but Sheryl scratched the lottery tickets... so we went shopping last minute, and they ended up with a knife and flashlights.  I think they were pleased, enough.

Here are a few pictures.  Its not a blog post without any pictures... right? 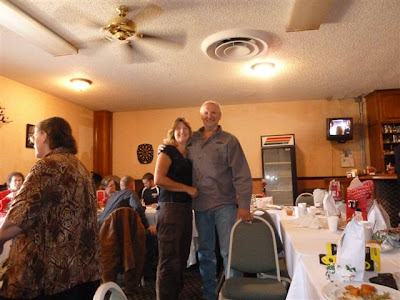 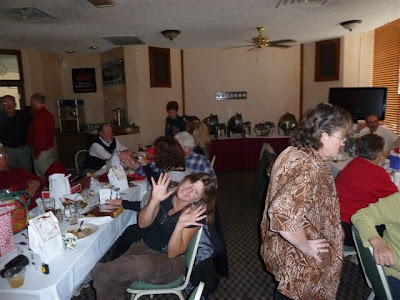 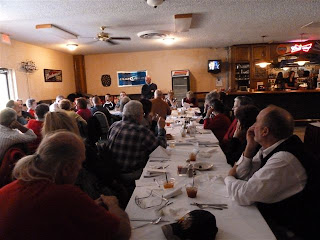 Thats not the end of the pictures... but for now I guess it is!  This blogger is not working too well right now!!!!