Yesterday we took the Harley out on a back road tour to visit three other parks/campgrounds in the area.  Since we've started camp hosting and workamping, we try to visit park and campgrounds in the areas we visit so we know if we might be interested in hosting there in the future.
Temps were in the mid to high 80s yesterday, with just a mild breeze.  I planned out the route so as to avoid traffic as much as possible, and it turned out to be an incredible ride. 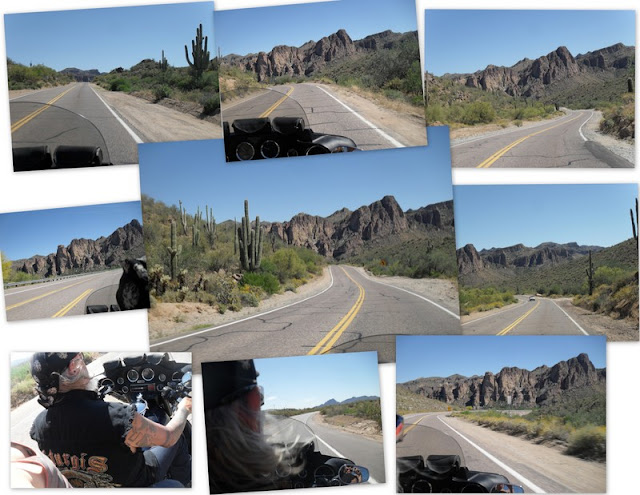 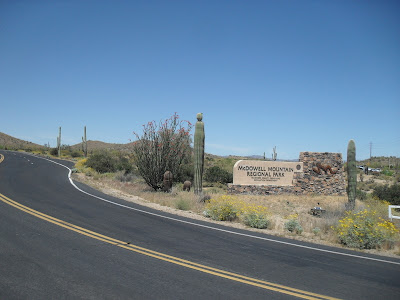 Then we rode through the town of Fountain Hills, which gave us the impression of being the more upscale part of the Phoenix area, with beautiful golf courses on both sides of the road, and golf cart crossings.
From there we hopped the 87 Beeline Hwy headed toward Payson, but we went only a few miles and turned onto Bush Hwy which would take us through the Tonto National Forest, past Saguaro Lake, then bring us to Usery Mountain Pass Rd.
It was a little freaky at times because the road often did this... 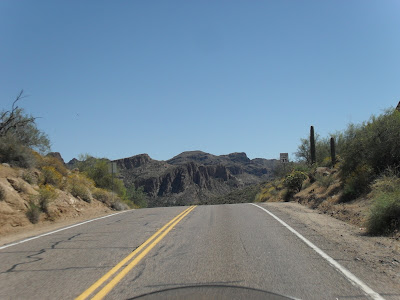 ﻿
The road would climb to a high point, then suddenly drop back down... so you couldn't see what was coming until you were at the very top.  On a motorcycle, that bothers me a lot more than in a car.

Off of Usery Mountain Pass Rd is Usery Mountain Regional Park.  THIS park may be the most beautiful desert park we have ever been to.  The sites are surrounded by every kind of cactus and desert plant.  The park just felt inviting. 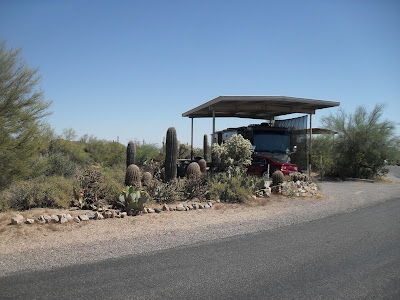 ... and all the host sites had a tall shelter for the RV 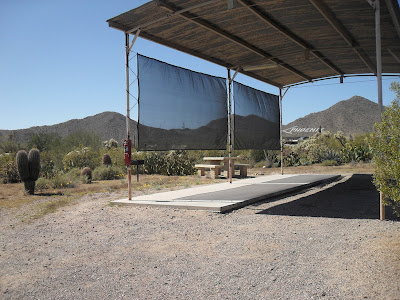 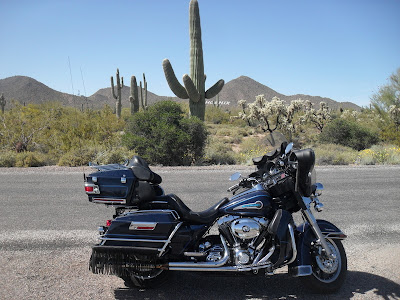 After letting the bike cool down a bit, we set out for the third park on our list... Lost Dutchmen State Park, which is out past Apache Junction.  This town gave us an opposite impression of that of Fountain Hills.

Our impression of this park wasn't good.  For whatever reason, we both described it as almost depressing.

This helicopter had been out searching for a man who went missing on a hike in the Superstition mountains a few days ago.  Unfortunately, they found his body this morning.  The man had gone hiking by himself, without knowing the area and without enough water. 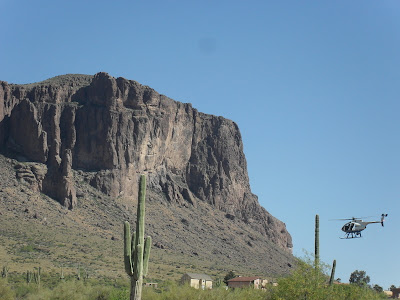 From Lost Dutchmen SP, I routed us the quickest way home, since we had plans to meet up with Harry & Drina at the Road Runner.  But this was Friday in Phoenix rush hour... NOT FUN!  I was so tense.  People drive crazy at 75-85 mph weaving in and out searching for the fastest lane, and we are so vulnerable out there in the open on a motorcycle.  I had Jeff get off the freeway as soon as we could... I'd had enough.  The bike was running hot so we stopped to let it cool down and calm our (my) nerves with a cold beer.  I was so sun burned that I wanted to get back to get Aloe Vera put on it, so we went back home instead of meeting up with our friends.  Up until that last hour, the day had been enjoyable but by then I was just so glad to be off the bike and feet on the ground safely at home.

We are meeting up with our friends as well as their grandkids in a few minutes, so better get going.