Here we are... at the Grand Canyon Railway RV Park in Williams, AZ. 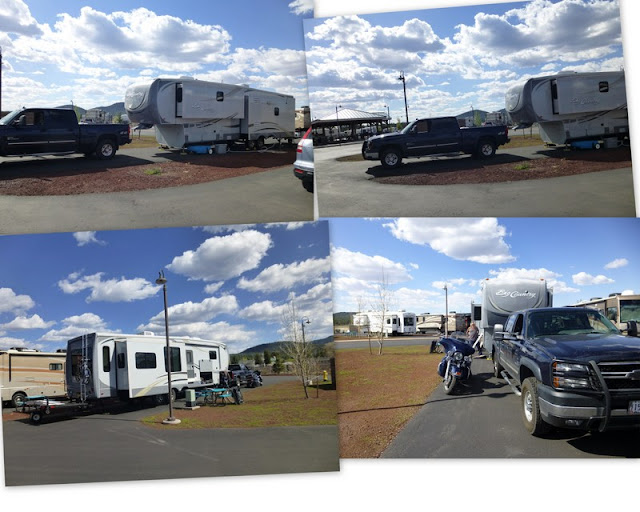 It's a good park, in that it is a Passport America park, which allows you 7 days at PA rate... and the sites are paved and wide enough to be comfortable.  Also, the amenities include indoor swimming pool, hot tub, and fitness center... available at their next door hotel.

We did not have a reservation, but were given, what we found to be an ideal site.  We are next to the laundry building, and we really needed to do some laundry... and we have an end site, so we have no one out our front door (not that we have a back door).

The downside to this park?  It is right next to the railroad track.  Ideal for taking the Grand Canyon Railway to the Grand Canyon, with the Depot on site... but not so ideal for sleeping when the cargo trains come through at night.  One night there were 4 trains that came through between 11pm and 2am.  And because they cross over streets, they make themselves known with their loud horns for at least a mile.

But another upside to this park?
Across the railroad tracks is Historic Route 66... where it's happening in Williams. 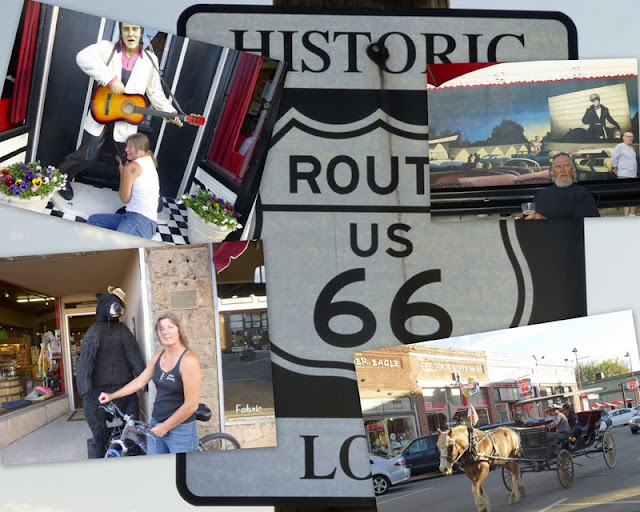 Two posts ago, after Brewery visits and outings with our friends, we said we were "beered out", and probably wouldn't have another beer until we visited the Grand Canyon Brewery.  Well, we were ready for that beer when we arrived.  As soon as we were settled in, we rode down to US-66 to locate the Brewery.  We found it... but what's this? 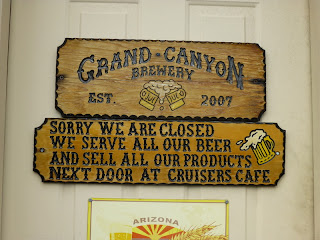 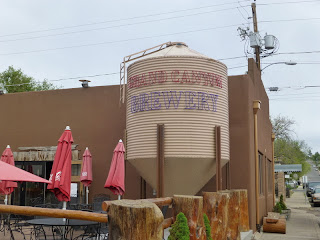 Next door to the Brewery was what seemed to be the most happening place on Route 66... Cruisers.  So we stopped in there.  It seems they are the acting Brewery's eating and drinking establishment. 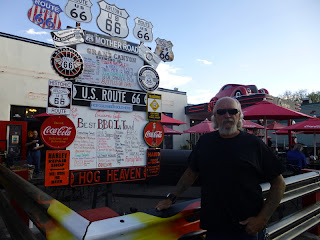 They only have the Grand Canyon beers on tap.
Apparently the brewery is closed due to success.
I guess they're too busy making beer to serve the public on site.

We certainly were not disappointed.  It was a very enjoyable time.

We had a couple good beers, shared a bleu cheese burger with sweet potato fries, and had a great time meeting and chatting with staff, local patrons and visitors. 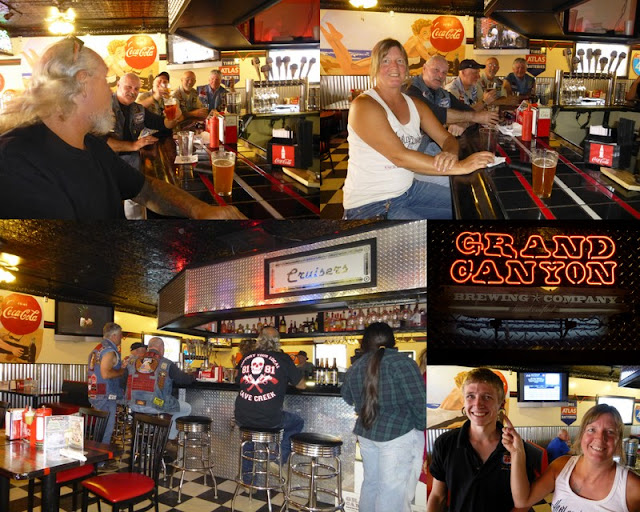 We were joined by a group of Vietnam Vet Riders who were on the Ride to the Wall run.  Two of the guys came from Atlanta, Georgia, and they had picked up the other two "Cajuns" in Louisiana.


Time to Move on?
I think it's fair to say that if you live the full-time RV life, and you go to visit a world-famous sight, that people come from all over the world to see, and your reaction to the site is more like "Ho-Hum... Ya that's pretty"... well it may be time to move on to new territory, to sites not yet experienced. 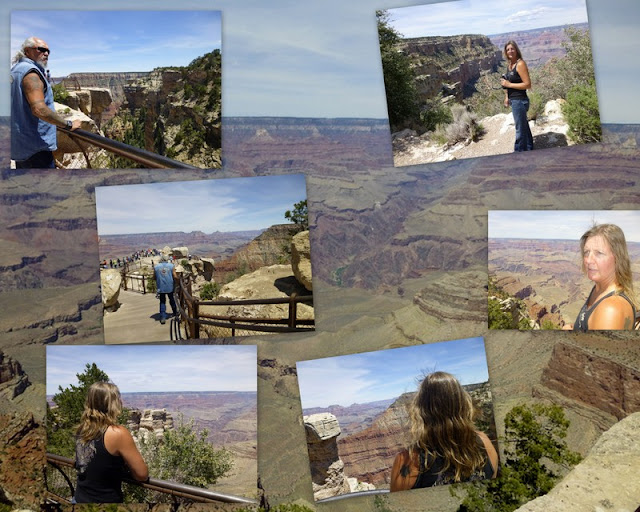 I came to that realization when we visited the Grand Canyon earlier this week.  We had visited together 2 years ago, and our reaction then was that of total Awe at the brilliance of the landscape.  I guess we expected the same this visit.  We had a great day, but we weren't awe struck.  So it was then that I decided it must be time for us to move on to States we haven't been.

Flagstaff...
On the agenda for one of our days here was to ride to Flagstaff to visit their brewery, hit up the Wal-Mart, and stop at the Grand Canyon Harley dealership in Bellemont.  The forecast did not say anything about storms or rain... just partly cloudy.  Sounded innocent enough... but as we headed East on I-40 we found ourselves heading toward some very dark clouds that were spewing heavy rains.. then it wasn't just ahead of us, but also surrounding us on each side. 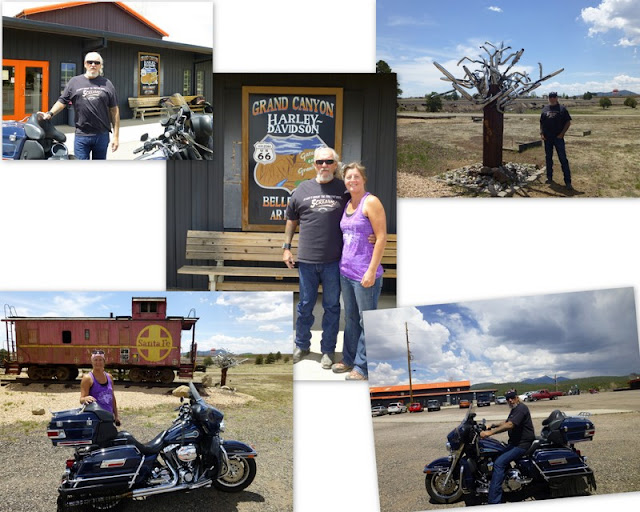 We made it to the Harley shop and took our time looking around, and we set out again with a goal of making it to the brewery and waiting it out there until the storm passed.
We found out later that there are 3 breweries, but the only brewery I had mapped out for us was Flagstaff Brewery, and we agreed this was our worst brewery experience.  Except for the burger we shared... it was a unique bleu cheese burger with grilled pear and balsamic glaze which was good... just not good enough that we would ever go back. 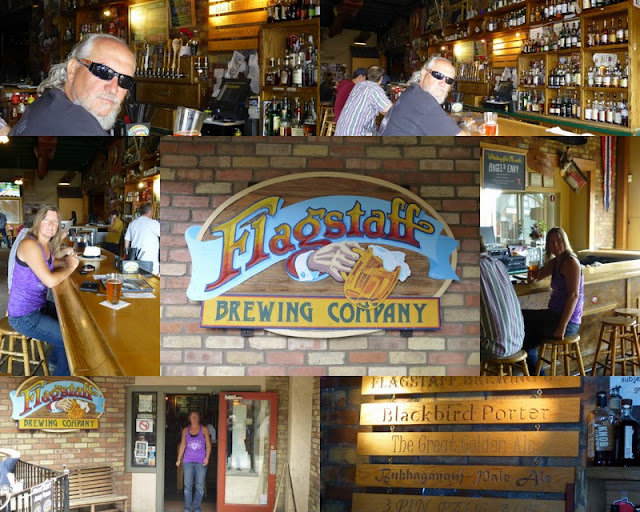 The storm didn't hit while we were there, so we hoped it had passed over.   No such luck... it changed directions!  Now we were heading back West and heading directly into the storm again.  Jeff picked up the pace (a little faster than I like) trying to get us home dry... we had doo-rags, t-shirt and tank top, no helmets, no sleeves, no jackets... we weren't prepared for anything but sunshine.  We rode in and out of rain drops, but made it home without getting soaked.
Seligman on Route 66...
It was another day of high winds, but we hadn't done much of anything the day before because of the wind... so we decided to get out despite of the high winds. 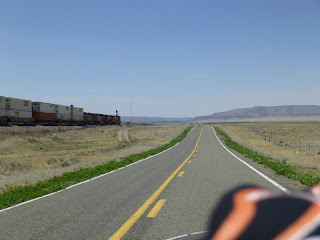 We headed for Seligman on Route 66.
We had to take I-40 part way, but we took Route 66 every chance... which was just a few miles at Ash Fork, then the final 19 miles into Seligman.
﻿ 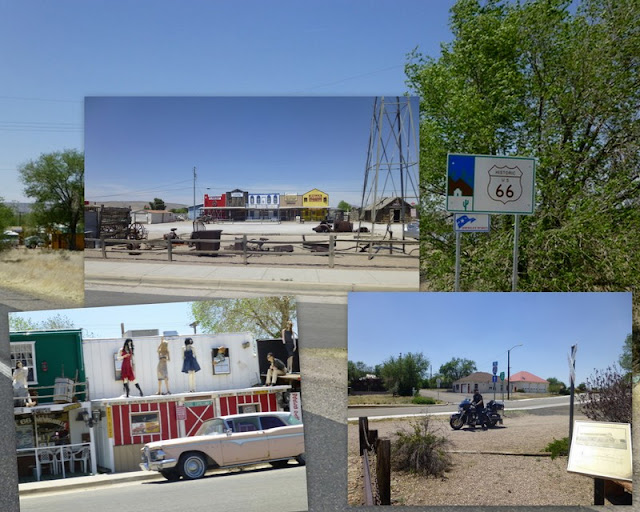 Last visit to Seligman we went to the famous Sno-Cap Diner... a very unique and fun "Burger & Shake Dive".  It's a must... but we are learning... everything ONCE.   And we weren't really hungry, we had a big late breakfast.

So we asked at the gas station... "where's a good place to get a cold beer?"  She told us a few places we could go, but said the place the locals go is the Black Cat.  So that's where we went.

When we got there, there was just one guy sitting out on the patio (the guy with the cowboy hat).  Inside were a couple guys sitting at the bar.  We got ourselves a beer and went outside.
Conversation started with Mike, then soon John showed up.  They knew each other well, and we soon started to get to know both of them.
Then the group grew a little larger when Rob came with wife, Melissa and their 3 children. 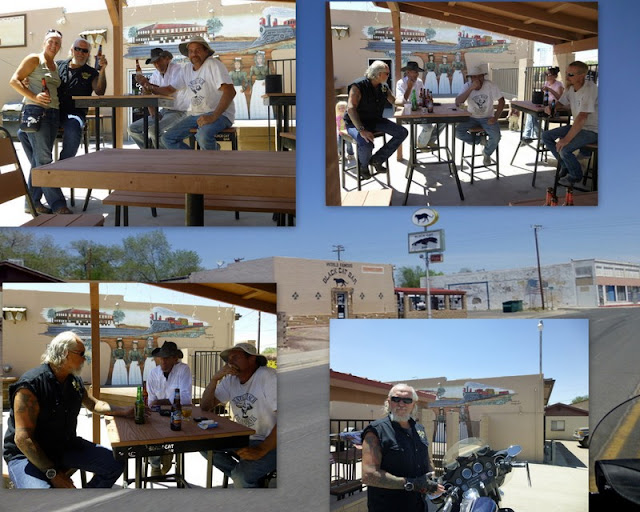 Meeting the locals in the small towns that we visit is the best.  I think we knew that but we're finally realizing it.  Mike lives 18 miles out of town... he has a generator and solar power and he has water delivered.  Which at one point became the topic of conversation between the three guys... Apparently the man who delivers the water has had cancer, and they were wondering if anyone has checked on him, because Rob's water was delivered, but Mike's was late being delivered.  Is there someone in line to take over if something happens to Charlie?  Small town conversation... maybe a little like full-time RV conversation about sewer tanks and getting the blue tote to the dump station.
We admire people who live "off the grid".  Mike invited us to come stay on his property any time... what a great offer.
The ride home was crazy with extreme winds... so extreme it ripped my sunglasses off my face.

Schedule Change...
I have been attempting to contact the owner of the RV Park is Moab, since we arrived in Williams.  But no response.  But yesterday, finally a response.  Months ago he had confirmed with us that we would be there on May 17, and we agreed.  But I am one to not move on plans made or confirmed a couple months ago.  I expect to fine-tune the plan as the time approaches.  And I am glad we did not move until we had that fine-tuned confirmation.  When he got back to us he let us know that there was an event going on and our site would not be available until May 20.
So we extended here 3 more days.

Allergies...
It is 3:00 in the afternoon and I haven't stopped sneezing or blowing my nose since waking.  EVEN after taking a double dose of allergy medicine.
Bad allergy day?  A look at the Allergy forecast on Accuweather says EXTREME for INDOOR DUST & DANDER.  Now I aks ya... What does the weather have to do with the Indoor Dust and Dander??
Ok... so if today is a bad day for indoor allergies, maybe I will be better outside!

Later...
Where do the locals go?
This should be the question, wherever we travel.  I had overheard the RV check-in person tell a guest that the local place was Sultana.  We hadn't gone there, and we're still here... so we set out to check it out this afternoon.  Maybe I would stop sneezing if I got out. 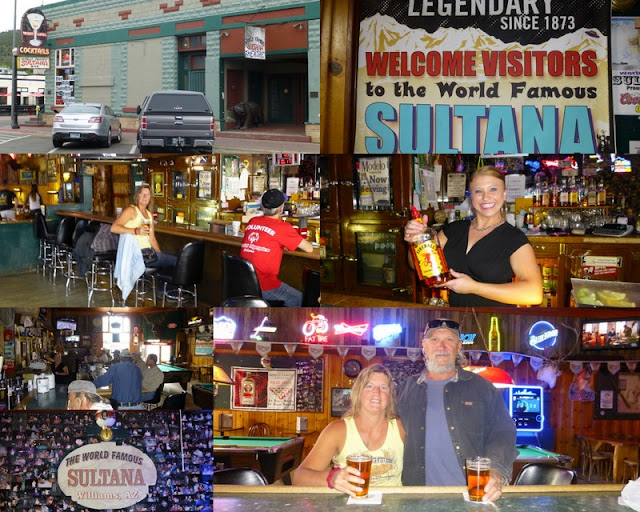 We walked to Sultana.  It looks a little shabby on the outside... but we've all been told to not judge a book by its cover.  Dominique was a joy of a bartender.  Friendly, talkative, and accommodating.  There was a sign on the wall... 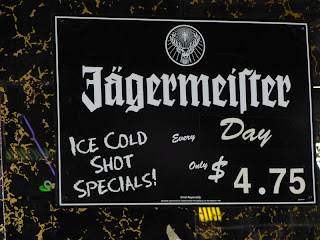 What is Jagermeister?  Its a black licorice tasting liqueur.  She offered me a taste... then sold me on a shot.

Then she asked if Jeff had ever tried Fire Ball Whiskey... tastes just like Big Red cinnamon chewing gum.  So she sold us both on trying something NEW... and NEW is Good!

Did getting out help my allergies?  Not much.  Instead, going out made Jeff's allergies act up.  It was quite humorous.  We walked back to the park both sneezing uncontrollably.

John Deere Harley?
Ever seen one of these?  We spotted this 3 wheeler around town a couple times.  Funny... Jeff has always said that if he were caught on a 3 wheeler it better be to plow his field. 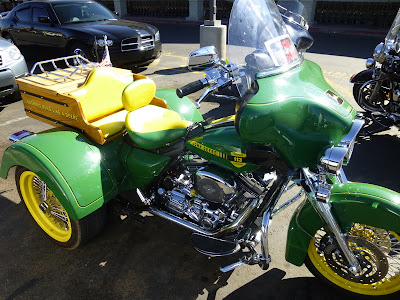 Our thought was that maybe the owner of this trike had said the same thing at one time.
We later ended up meeting the owner, who turns out was also the builder.  He works for Lehman Trikes.  They build custom trikes from Harley's.  This may be Jeff's bike some day.


So we have one more day here in Williams, AZ.  What will we do?  We don't know... but we will be all ready to pull out Sunday morning for our Summer workamping gig.  We will drive half way or more and finish the trip on Monday.