So what have we found to do while staying here in Cottonwood, Arizona?

Mostly antique stores now inhabit the buildings that line Main street in old town Cottonwood.
At the corner of town is Larry's Antiques & Things, "Two Acres of Antiques" their sign says.  We had to check this one out.  A whole lot of stuff, in several buildings, upstairs & downstairs, and all over outside in between the buildings. 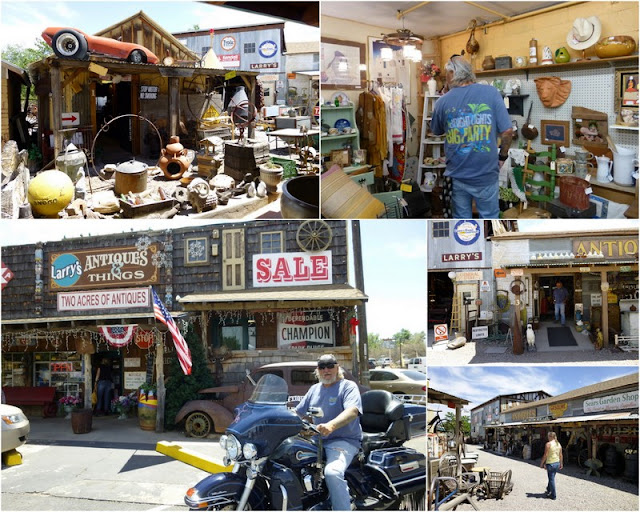 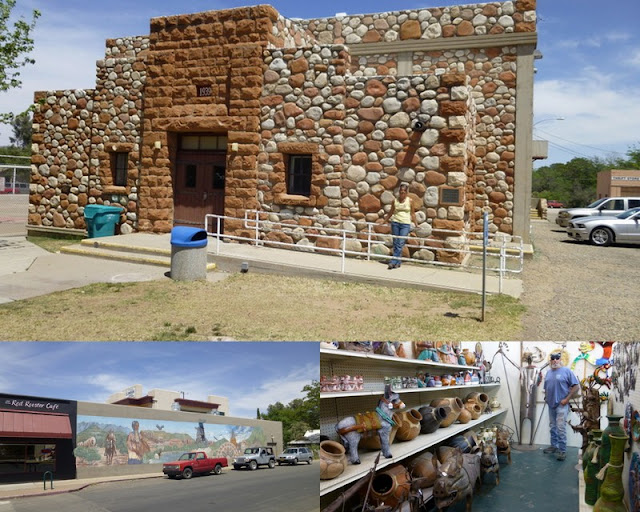 Hikes (or Walks) on the trails at the park... 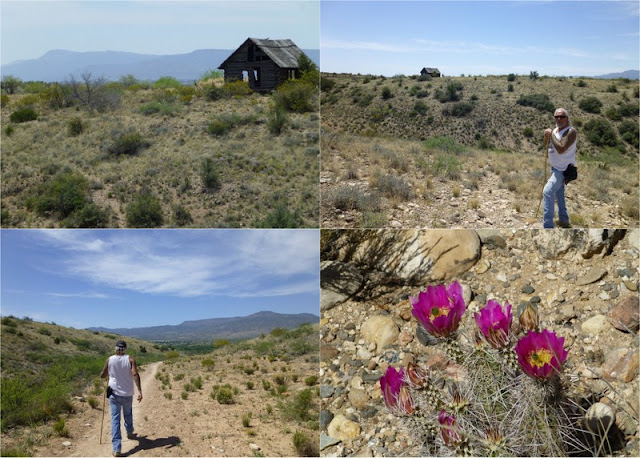 Verde Canyon Railroad...
We visited the Verde Canyon Railway station... just to see where it was and ask questions, since we will be taking the Train trip while we are here.      http://verdecanyonrr.com/ 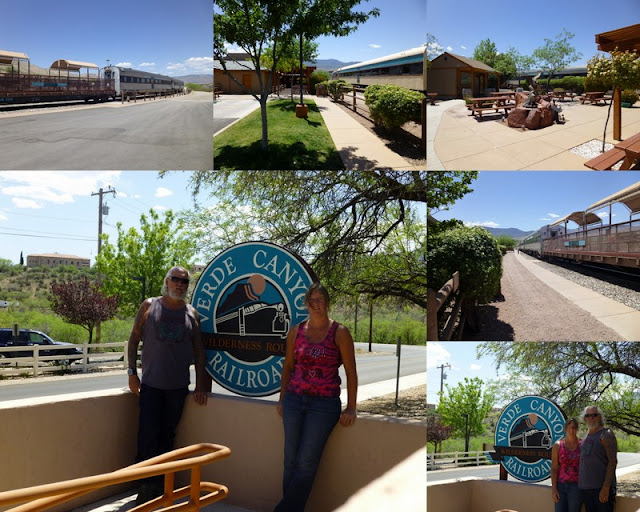 Historic town of Jerome...
An old mining town on the hill at 5000 feet.  Its a rundown old town with restaurants, bars and shops (mostly art work and souvenirs).     http://www.azjerome.com/ 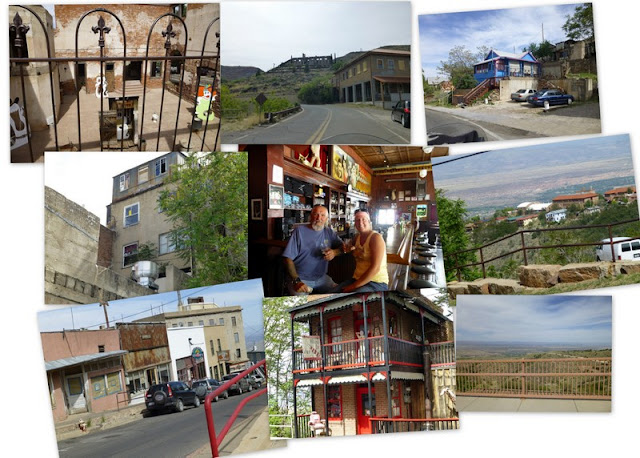 Ride to Prescott...
From Jerome we rode the very windy road through the mountains of Prescott National Forest.  We climbed to the Mingus Mountain Summit at 7200 feet, then followed the winding road down the other side and into the Prescott Valley.
The warm air and the slow pace up the mountain forced us to stop to let the engine cool down. 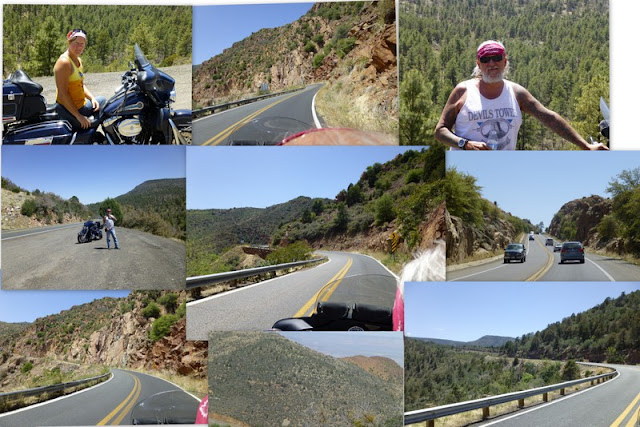 Prescott, AZ...
and a visit to the Prescott Brewing Company... where Jeff had their Ponderosa IPA and I chose their Strawberry Wheat... both very good. 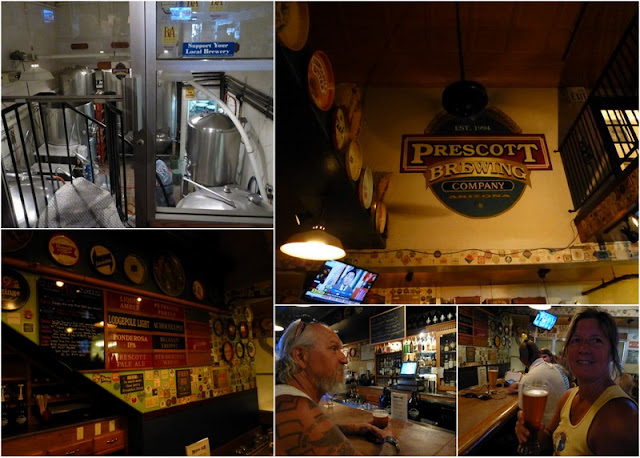 Tuzigoot National Monument...
An ancient pueblo... said to be an ancient village built by the Sinagua people.  http://www.nps.gov/tuzi/index.htm
My opinion? I'm glad we bought the National Park Annual Pass... I could not justify $5 per person. 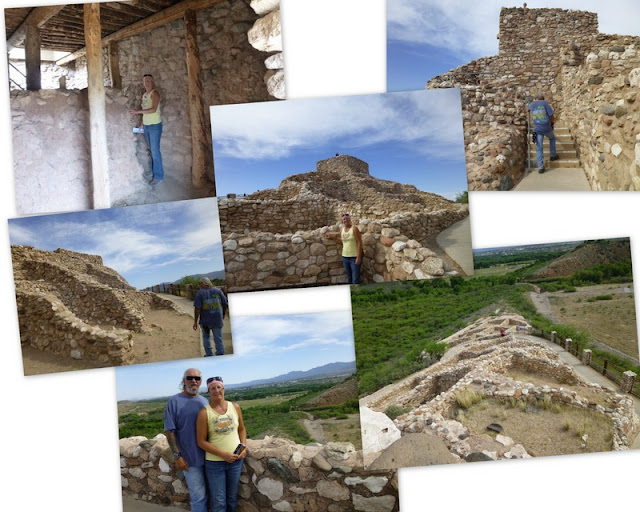 Red Rocks of Sedona....
Took a short hike on a trail we accidentally found while riding around the Sedona area. 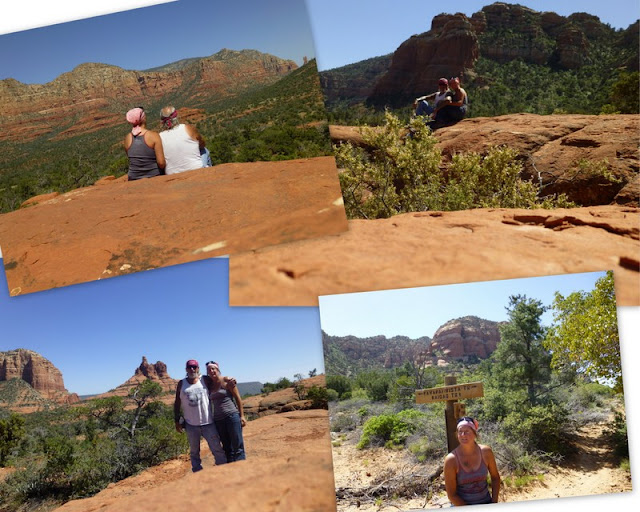 The ride to and around Sedona was beautiful... this is OUR kind of terrain.  and a lot like where we will be spending the Summer (Moab, UT).  However... we can't say anything good about all their way to many Roundabouts!  They have roundabouts everywhere!  We hate roundabouts!  How confusing... do I go, do I stop... are they coming this way or turning off that way?  can I trust them to stop?  are they paying attention?  do they know they need to yield?  do they know what that means? 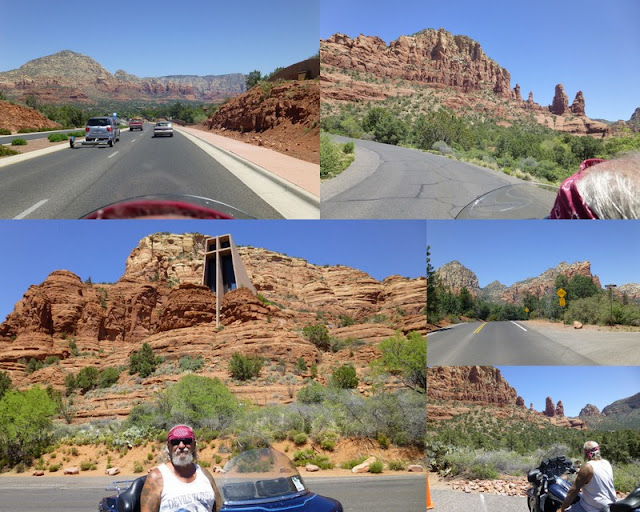 We searched and searched for the Oak Creek Brewery and Grill...  this is by far the most hidden brewery we've been to.  We had to stop twice to ask where it was at.  But it was busy... and very good.  Jeff had their Doc's Pale Ale (since they did not have an IPA) and I had their Horseshoe Hefeweizen, which was exceptional!  We shared a Ruben sandwich with fries and a surprise fried spicy pickle! 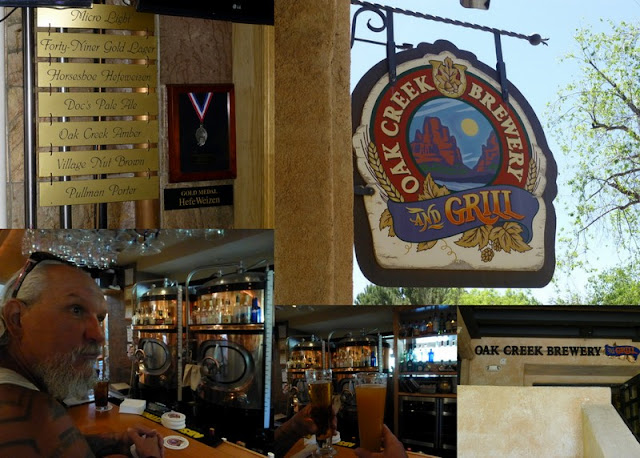 We know we are not the only full-time RVers out there that seek out the Brewerys wherever they travel.  So we were thinking about a full-timers club "Brewery Chasers"... whatcha think?? 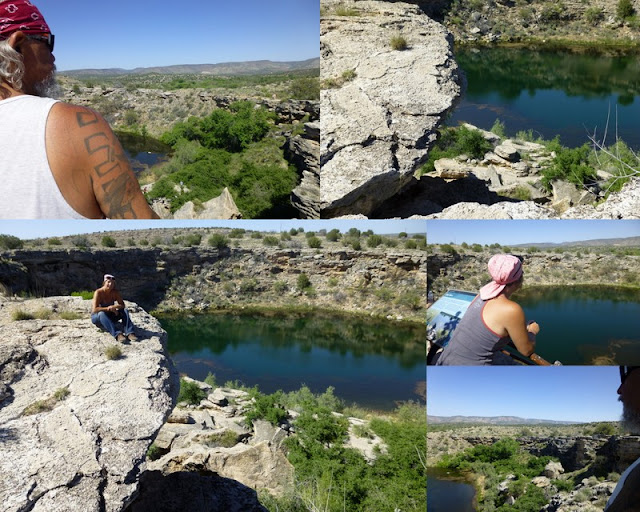 Friends...
Harry & Drina drove up Saturday to spend one more day with us before they leave for Oregon and we leave for Utah.  As usual we had a good time.  We went to Jerome... and just had a good time together.  We parked at the bottom of the hill, and walked up into town with The Asylum and Grand Hotel as our destination... but Jeff and Harry got away from Drina and me, and found their way to the Spirit Room (go figure).  Then we checked out some shops. 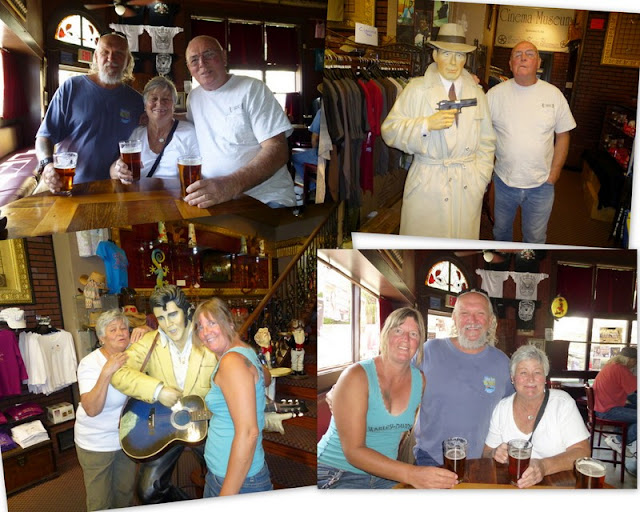 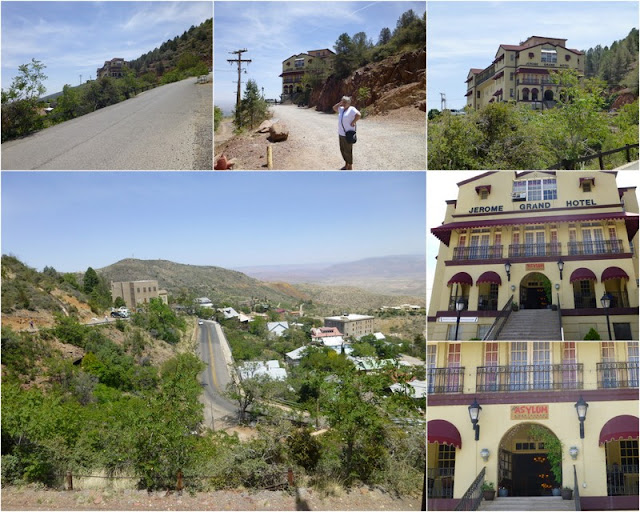 the Asylum is the restaurant & bar at the Grand Hotel.   We considered lunch, but chose to just sit at the bar and have another beer! 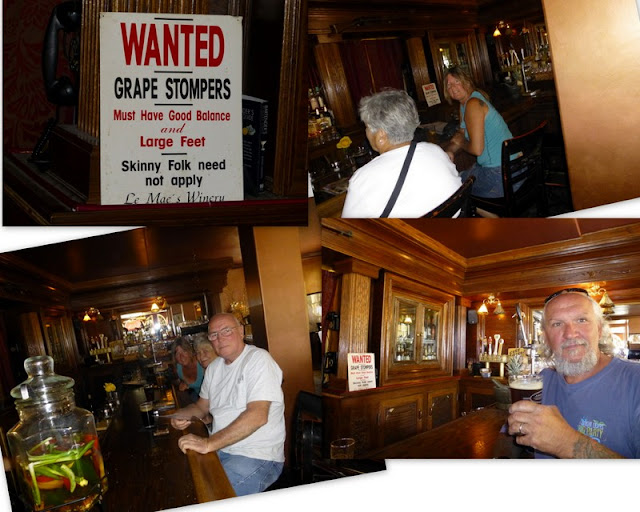 Next up was lunch.... we stopped at the Haunted Hamburger, but it was too cramped.  So we walked on down to The Mile-high Club Grill... which proved to be a good choice. 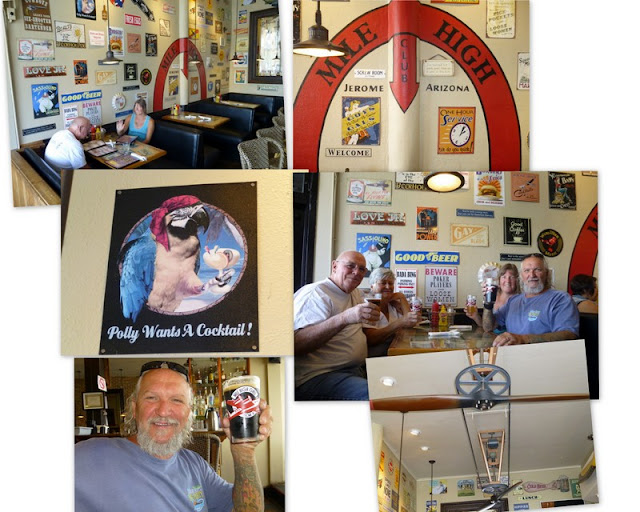 Now, as you might think...  we're all beer'd out.  No more beer.  Until we get to the Grand Canyon Brewery!

On the schedule for this week...  Train Trip, Montezuma Castle, and some more red rock hikes.

Email ThisBlogThis!Share to TwitterShare to FacebookShare to Pinterest
Labels: Arizona-Cottonwood