We have at last reached our furthest point East for our travels.  We're at Mount Desert Island in Maine, which is home of Bar Harbor and Acadia NP.  Much to see here... and we've met up again with friends, Steve and Roberta.  So better get going.  Here goes what came before here!

9/21
We've been moving along way too quickly.  We've felt ready to move along, each place we've stayed and left... but probably because we know we don't have a lot of time, yet we do have a lot of places to see.  Moving along at this speed, I seem to lose track of where we've been, as soon as we leave.  Hopefully that will change soon.  Tomorrow we will be in Bar Harbor, Maine for 5 nights.

We found that many places in New England, especially Maine, close between October 8th and 15th.  So we thought we had better move along!

Tonight we are staying in a Wal-Mart parking lot in Newport, Maine.  I think this is only the second time we have stayed at Wal-Mart.  It's great!  I can shop, then go back when I remember everything I forgot!   And we can rent a Redbox movie and just walk it back! 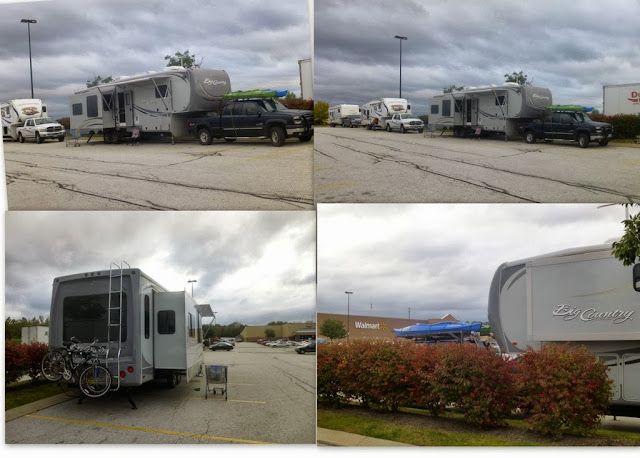 We took Scenic Route 2 from Bethel, Maine to Newport, Maine today
The route involved a lot of speed limit fluctuations, as we traveled through many tiny old towns.
But other than that, the road wasn't bad, and we enjoyed the drive. 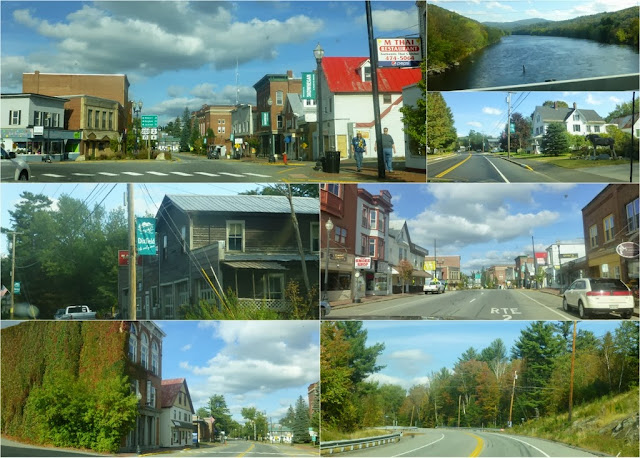 Last night we stayed in Bethel, Maine
The park was Bethel Outdoor Adventures, a PA park... but we didn't get the PA rate because it was the weekend.  Seems a little crazy, since the park was nearly empty. 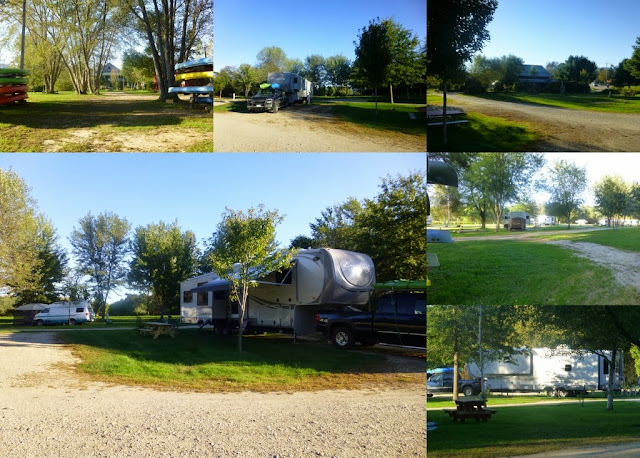 This park was along the river with a convenient canoe/kayak launch, and a bicycle path out of the park.  A perfect place for us... if only we had the time.

Prior to Bethel, Maine we stayed in Marshfield, Vermont for 2 nights at another PA park, Groton Forest Rd Campground.  It was very quiet and comfortable.  but I neglected to get pictures of our site!  so here are some I took while Jeff was dumping on the way out.  We were parked in the grass next to the office and laundry room. 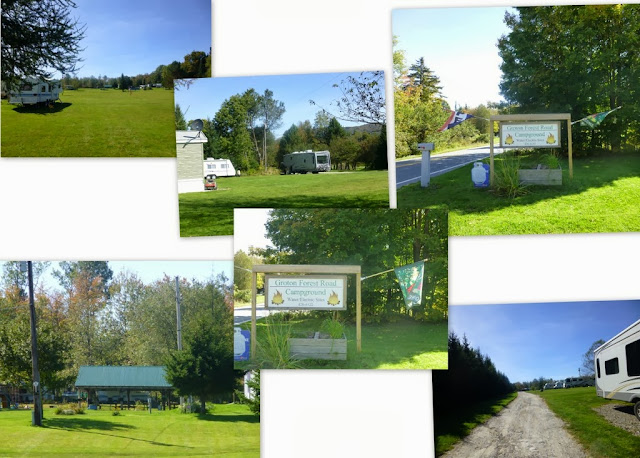 While there, we went on a back road scenic tour.
﻿


First on the tour was Bragg Maple Farm. 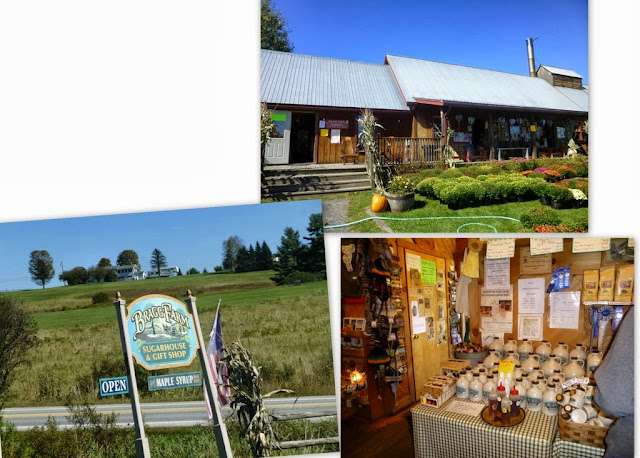 There are several Maple farms around, but this one interested me most because they are the only farm around that still does it the "old fashioned way".
They still tap the trees and hang buckets to collect the sap. Then boil over wood heat.
Did you know... it takes FIFTY gallons of Sap to produce ONE gallon of pure maple syrup? 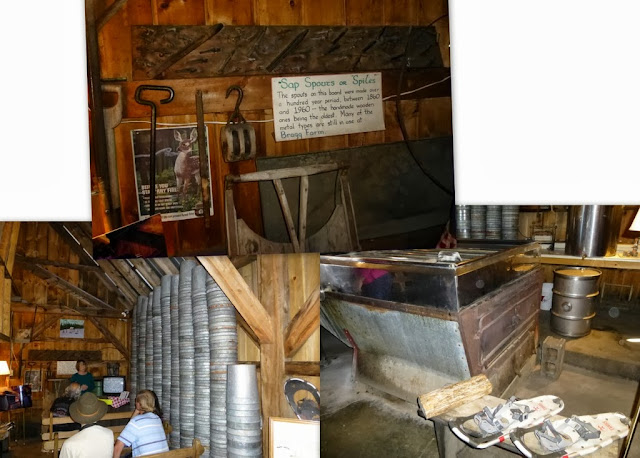 Next in line on our back road tour was Grandview Winery.
It's a very small family Winery.
We did a taster of the 5 bottles they currently had open.  I liked most of them, even though I normally do not like wine... because they are not the usual.  They were wines like black currant, berry, pear... 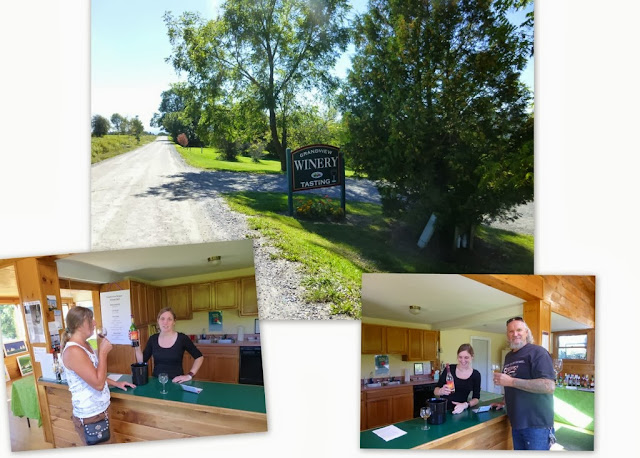 The final "attraction" on our scenic tour was the Cabot Cheese factory (Creamery)
They were not making any cheese when we were there, so we didn't do a factory tour.
We DID however, enjoy the free grazing at their cheese sample table!
There were cheeses for every palate (trust me). 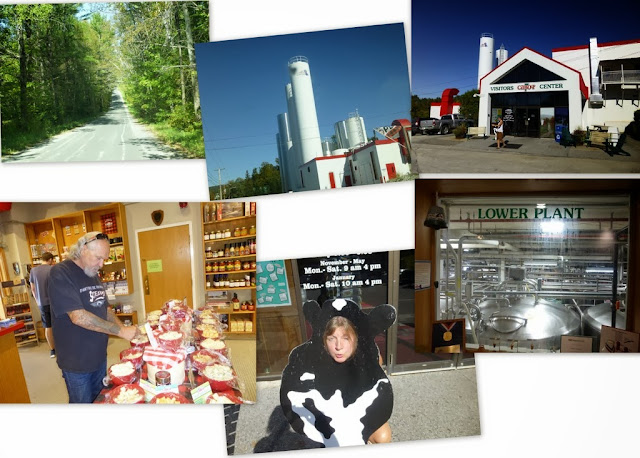 Prior to Marshfield, VT we stayed near Middlebury, VT for 2 nights.  It was another PA park... Lake Dunmore Kampersville.  They gave us a spacious corner pull-thru site. 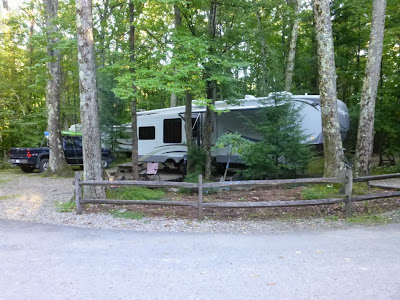 From there, we visited Middlebury, which we soon identified as a college town.  The layout of this old town made no sense... at least we couldn't figure it out.  But I suppose when the town was being formed starting in 1784, it made perfect sense for them then! 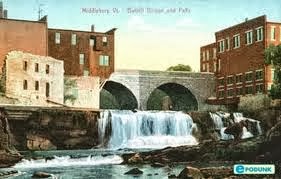 I took these 2 pictures from the internet, since I forgot the camera that day!﻿ 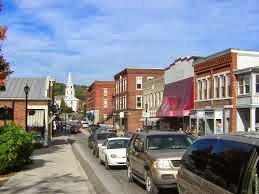 The next day we set out to visit a local brewery and the Waybury Inn... the setting for  the show "Newhart" where they operated the Stratford Inn, which was probably the first time I wanted to go to Vermont.  After that, there were the movies "Funny Farm" and "Baby Boom" that reminded me I wanted to see Vermont.
The website told of the pub/casual dining in the back room, where everybody knows each other, and if they don't they will by the time you leave.  Also, there were pictures taken from the Newhart set.  Well... we were sorely disappointed.  We found the man behind the bar to be very unwelcoming, and it was clear that they were annoyed by people who came there because of the show Newhart.  We had planned to have lunch, but Jeff drank a beer and we left.


Prior to that experience, it had been a great day.
Otter Creek Brewing 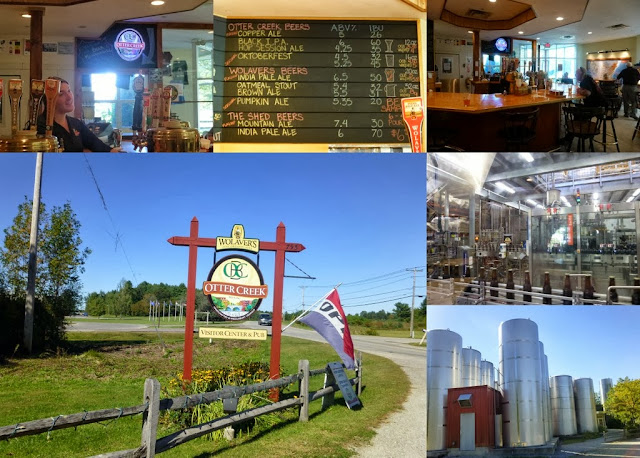 What a great time we had there.
I had gone for their Pumpkin Ale, but decided on a Sampler tray... and they were all good! 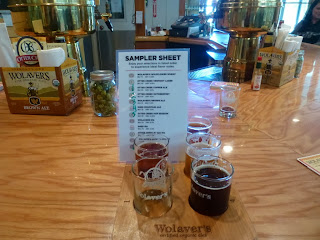 Sara, the gal behind the bar, was very friendly and when Jeff told her we collect Brewery Coasters, she set us up!  even with bumper stickers! 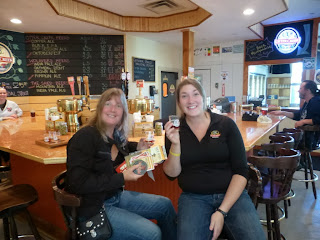 When we arrived, there was a car in the parking lot with New Jersey plates.  So once settled at the bar, I asked the couple there, if they were the New Jersey plates.   They were... they were just on vacation.  We chatted a little, then another couple came in, and we struck up conversation with them.  They were RVers , originally from Indiana.  Then another couple came in and sat on the other side of us.  They were Harley riders from Florida.  What a fun time meeting other travelers from all over!
I've gone about this blog post backwards... so now we are entering Vermont!
﻿ 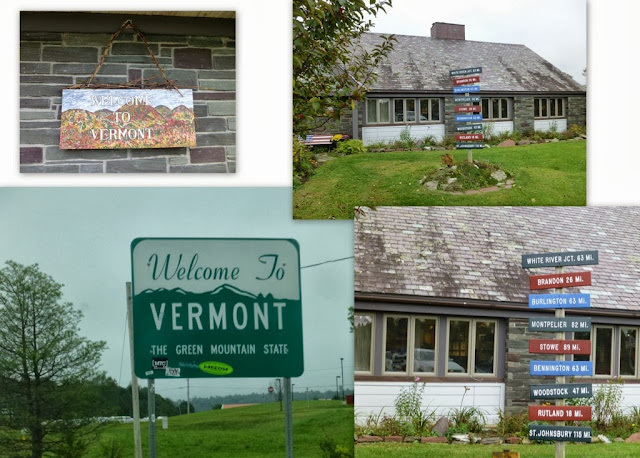 and what a WELCOME they gave us at the Welcome Center.
They got out the maps and brochures and showed us where to go and what to see.
Carol had entered a baking contest and won with her maple nut cake.  She gave us a delicious sample, and they wanted us to try Pure Vermont Maple syrup as well! 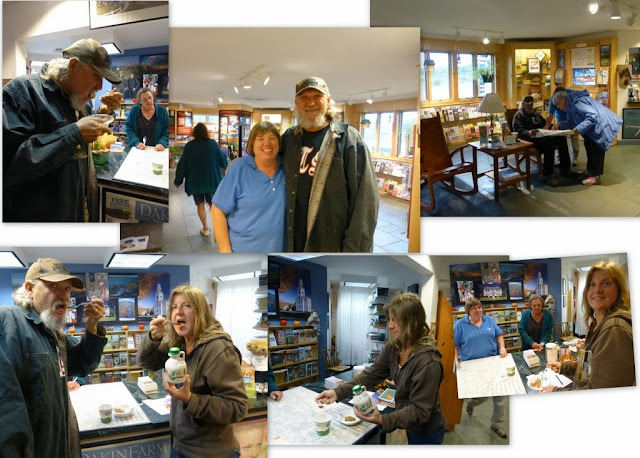 So that has taken us backwards to the end of the last post, when we were headed for Vermont.
The trip through New Hampshire was brief, as it is only 35 miles wide at the top of the State.
but we got a picture of the sign! 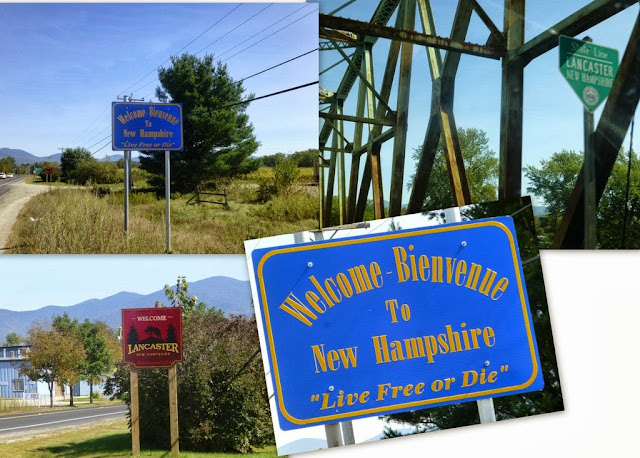 We will see a portion of lower New Hampshire on our way down from Maine.
We have now arrived at the furthest point East that we are traveling.
We are on Mount Desert Island, visiting Bar Harbor and Acadia NP.
From here on out we will be heading South and West.
Posted by The Bright's at 9:19 AM