I have SO much to write about... we've been to 4 States since Boston, but my next post was to be of our trip to Boston!  So I better do that!

We had a great time... and an even greater time, since we experienced it with our friends, Steve and Roberta.  We seem to always join up with them after they have found their way around the area.  How convenient for us, eh?

We met them at Wompatuck State Park,  a bit South of Boston, with a commuter boat dock just a short distance away.  I failed to get any pictures of the campground or our site!  I hate it when I do that!  We got a site next to them... and planned to stay only one night, so we stayed hooked up.  We ran one side of the 5er up on blocks, to level side to side and we raised the front as much as we could while staying hooked up.. but it wasn't good enough.  When we headed for the bedroom, we started to pick up pace with the downhill slope... then we had to grab the counter to pull ourselves back into the kitchen.  It was funny.  Yes we could have unhooked, but why?  Humor!

We set up in a few minutes and were ready to go into Boston.


We boarded the commuter boat, and made our trek into Boston.
﻿ 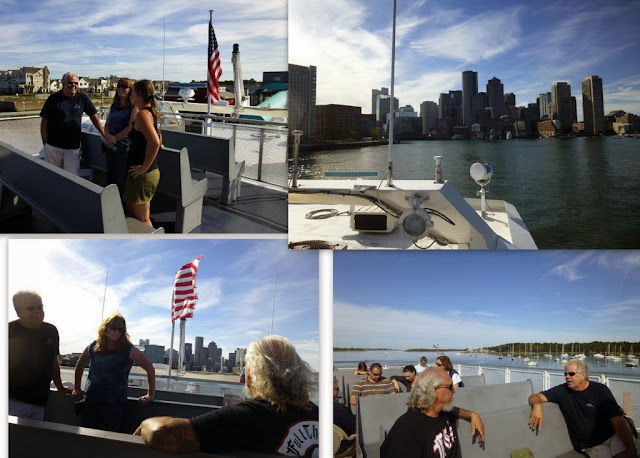 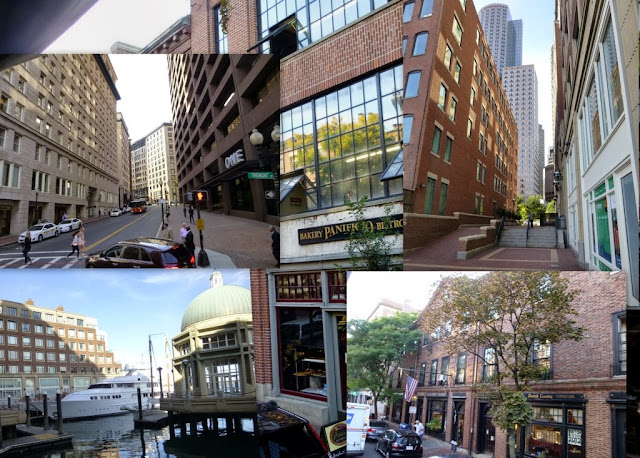 I was saying, right away... I'm SO glad we didn't attempt to drive into the City!!

The commuter boat brought us to the port in downtown Boston... but now we needed to get around Boston.  So we found the Trolley.  They wanted $31 to take the Trolley all around town.  The entire route is 2 1/2 hours, and you can get off and back on at any of the 19 stops.  Trolleys come every 20 minutes. 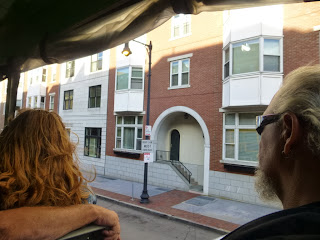 HOWEVER... it was 3:00 and the last boarding onto any trolley was 5:00, so we wouldn't be able to make any stops and re-board a later trolley.  Because of this, the trolley owner offered us tickets for $20, and we accepted.

It was an open air trolley, and because of the hour, there was a lot of traffic congestion, so we moved along slow... which allowed us to get a more up-close feel of the city.
﻿ 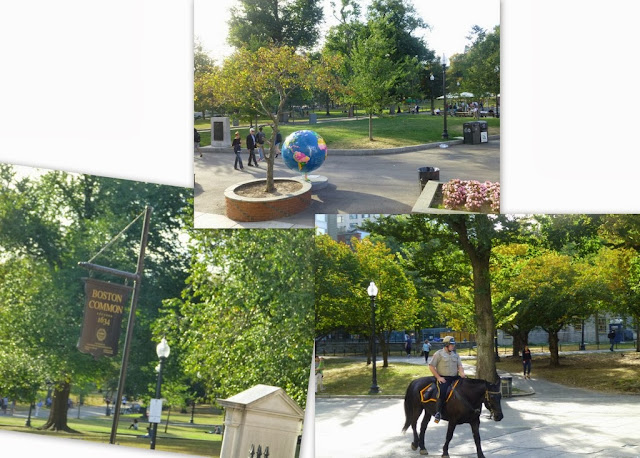 Boston was home to the bar that was the set for the TV show, CHEERS.
I know... there is so much more to Boston.
Something about a "Tea Party" back in 1773 that took place in the Boston Harbor...
but we were here to go to CHEERS! 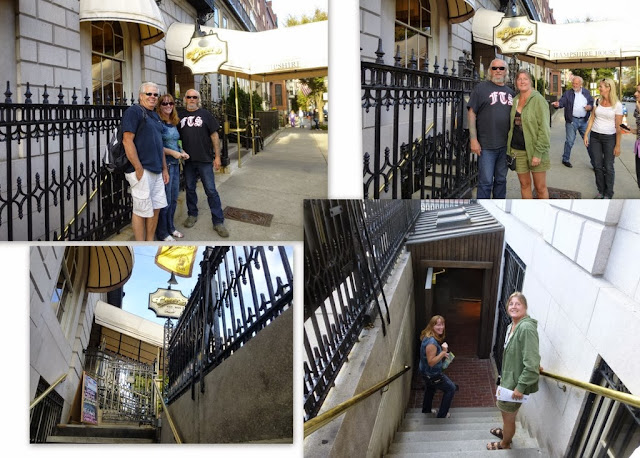 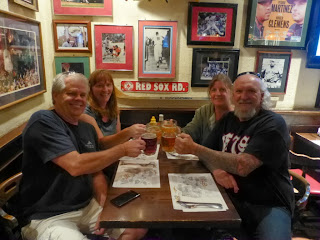 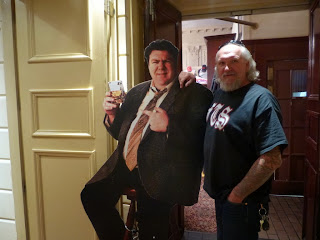 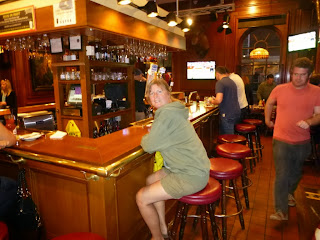 Upstairs was the actual Set from the TV show.  There were plaques embedded in the bar, where each actor sat.
I was sitting to the right of Frazier's seat.

We had hopped off the Trolley at the closest stop to Cheers on Beacon Street, and walked.  But now we had to find a way to get back to the harbor to catch our boat home.

The solution was going to be the Subway... 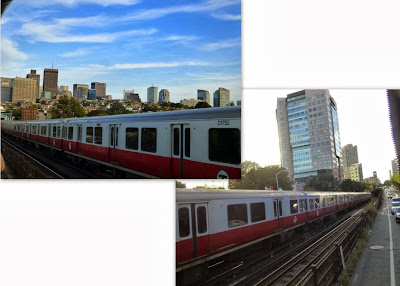 So now we just had to find our way to a Subway station.

Would following the red bricks of the "Freedom Trail" get us there? 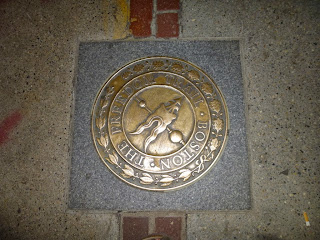 We found it!  Yippee!  But now how do we buy a ticket?
There is no one "on duty"... the only people to ask are as confused as we are! 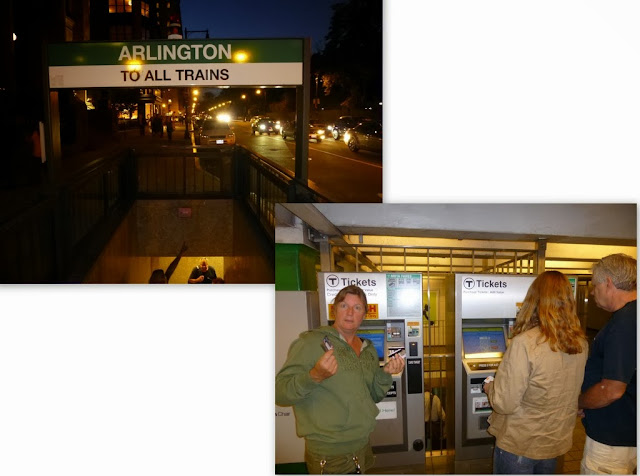 We finally figured that out...
but now we had to make sense of their map!  Which subway do we take to get where we want to go?? 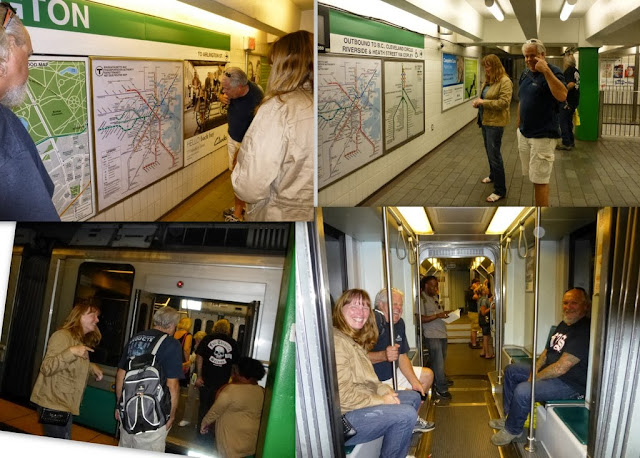 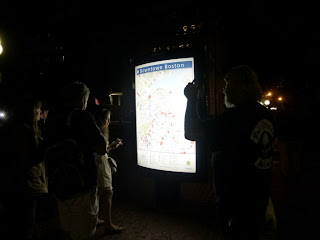 Got it!!   We're on our way!!
We even got off at the right stop!  or I guess we did... we still had to find our way to the harbor!
Yet another map to confuse us!


It felt like we were lost... but we did find our way... and in time to catch the last boat ride back Hingham wharf, where Steve's truck was parked. 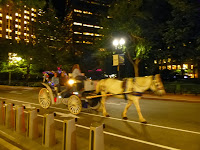 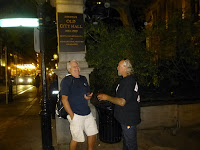 So that was our trip to Boston!  Brief but Fun!  That's how we like it, when it comes to the City.

Like I said, we have been to 4 States since then...
so check back for from Massachusetts to Pennsylvania!

Email ThisBlogThis!Share to TwitterShare to FacebookShare to Pinterest
Labels: Massachusetts