At the end of last post, it was October 16th, and we were leaving Fort Boonesborough SP, headed for Tennessee.
Our initial plan was that we were going to Nashville.  But plans change!  And sometimes, they change very last minute.  We were actually driving out of the park, when we changed direction.

This ridiculous government shutdown has really screwed things up for a lot of people.  We wanted to visit the Great Smoky Mountains, so we were trying to hold off, giving them a chance to get "it" together.  Some States had paid to open their parks.  Tennessee and North Carolina had just teamed up and paid to open the Great Smoky Mountains... but only from Wednesday to Sunday.

With this news, we turned left out of the park, instead of right.  Our sudden revised plan was to go to Pigeon Forge and stay a few days.  I phoned parks while Jeff drove us in that direction.  I searched and called for many miles with no luck.  Some parks had a site for tonight, but that was it.  Other parks were so ridiculously priced, it was no wonder they had space.  We were getting close to the exit for Pigeon Forge, and I didn't have anything... so I had Jeff keep going.

We decided to go on into North Carolina, to the other side of the Great Smoky Mountains NP.  I called Harrah's Cherokee Casino in Cherokee, NC at the other end of the NP, and confirmed that they allowed RV overnight parking.  So that was the new plan.

The new problem with this new plan was that it was getting late.  We didn't know the roads, and we have learned to not travel with the fifth wheel after dark.  It doesn't go well.
So I found a Walmart in Newport, TN where we could stay the night. 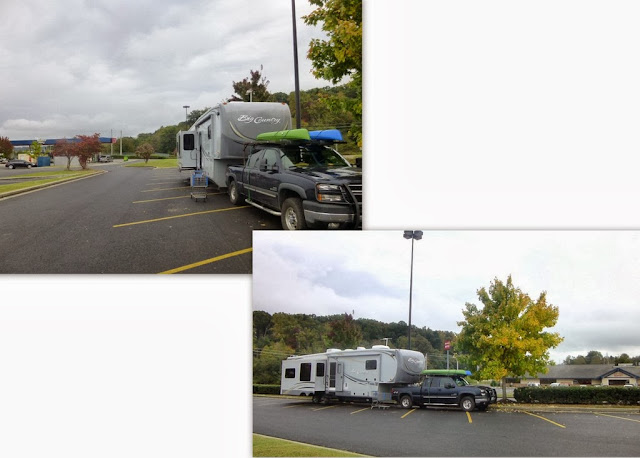 Another good Walmart lot that we would recommend.
Big Bad Blunder
When we parked, we were focused on pulling up as close as we could to the curb.  This way we can put all our slides out and still be way within the parking lines.  What we DIDN'T focus on was that big tree!  See that big yellow tree in the photo above?  We drove our rig right into that tree, before we noticed it!  All we could do was pull ourselves out of it and hope it didn't do a lot of damage.
It was visible from the ground, that a branch had ripped a hole in the rubber roof, so I climbed on the roof to survey the damage.  Fortunately, that was the full extent of the damage.  Jeff tossed up a tube of Goop (we love that stuff!) and I put a seal over the tear.  Its about a pea size hole that I closed up and "gooped" real good.
An extra at this Walmart was a gas station in the same parking lot that had a water faucet and, upon asking, had no problem with us using it to fill our 6 gallon water jug.  So we put 18 gallons of fresh water in our tank and filled up our generator.  We were now prepared for a couple nights in the casino lot.
Thursday, October 17th
North Carolina 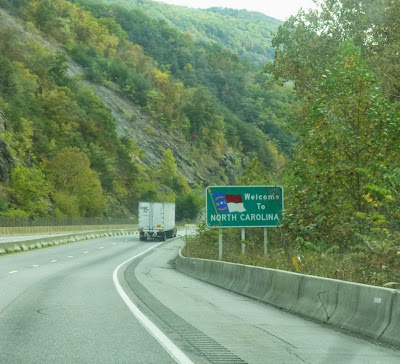 Poor Routing
We had less than 70 miles to travel today, but were we ever glad that we didn't attempt it yesterday after dark!  I do the best research I can, when it comes to our routes.  I have a book that lists Low Clearances, I look up roads on the internet, I Google Earth roads... but sometimes, I make a wrong choice for us.  Today was one of those days.
We took Hwy 19 from I-40 to Cherokee.  I saw that the road was curvy, but that was nothing for Jeff.  What we DIDN'T Know was that it was extremely Narrow... there was only a few inches of  pavement outside of the fog line.  But we didn't have even those extra inches of pavement much of the time.  There were many places where the pavement had broken away into the inside of the white line... and the drop off was about a foot!  In other places, usually on corners, the rock wall seemed to protrude into the road.  We ALSO didn't know that many miles of the road was at a 6% to 8% down grade.  And what we DIDN'T figure on was that there would be dense fog!!  We went in and out of the fog... sometimes barely seeing the front of the truck.
﻿
So here we were on this extremely narrow and corroded road with extremely sharp corners with jagged rock walls... trying to control the gears and brakes at an average 7% downgrade in dense fog!!!!  It was tense! and I felt so bad for sending my driver this way.  I honestly don't know how we stayed on the road and made it safely to the end.  I guess our guardian angels were working overtime!
Harrah's Cherokee Casino
Were we ever glad and thankful to arrive at our destination.  No problem finding it and getting in.  What a huge parking lot they had and they did in fact have designated overnight RV parking... and it was incredible! 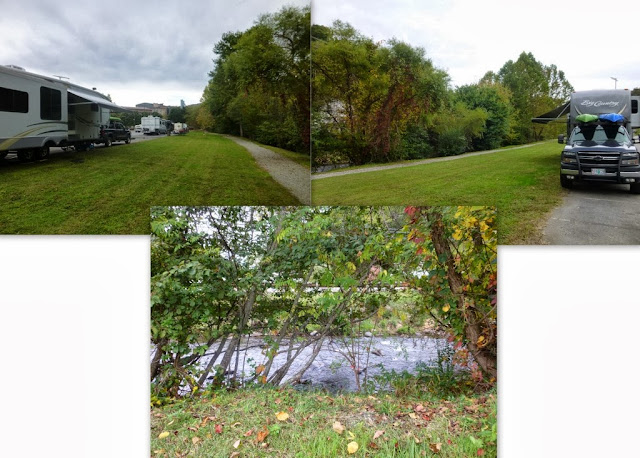 We had grass, a walking path, and a beautiful flowing stream... in our front yard!
We couldn't ask for anything better.  We were so glad with our decision to stay here.
Friday, October 18th
Great Smoky Mountains
I'd had my Mom send our important mail to the Post Office in Pigeon Forge, but with our change in plans we were in the area sooner than we had planned.  We were parked on the South end of the Great Smoky Mountains, so we didn't want to make the trip through the park until we knew we had mail at the other end.  Fortunately when I called this morning, they confirmed that the package was there. 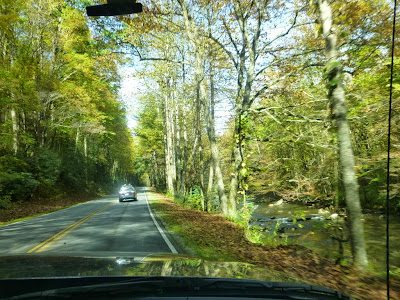 So we anxiously set out to enjoy a day in the Great Smoky Mountains and visit Pigeon Forge and Gatlinburg.
At first it seemed like there weren't that many visitors.  It was a beautiful Fall drive.

﻿
Then it happened.  We found the visitors! 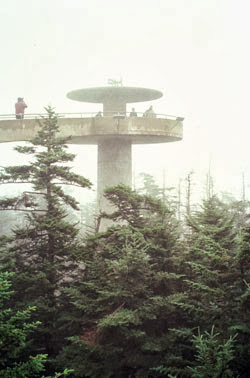 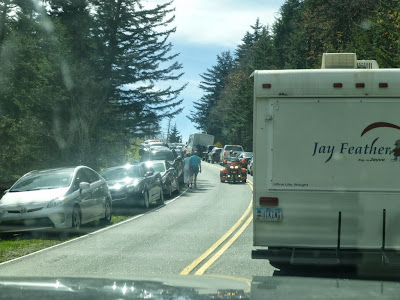 A long, long, line of vehicles not going anywhere.  We all inched along.  Drivers that could, turned around... and I think that was the only reason we were able to inch along!
This wasn't our idea of a good time... and we had mail that we had to pick up in Pigeon Forge!
So when we found a potential turn around spot, we did it.  I could just imagine what the people pulling the trailer were thinking... there was no way they were going to get turned around.
Finally out of that mess... we were able to enjoy the beauty of the mountains. 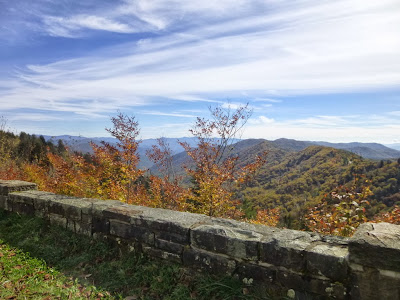 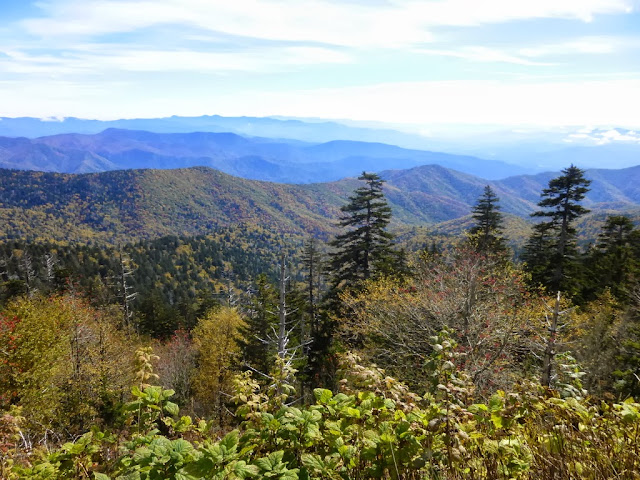 After exiting the park, we drove straight into Pigeon Forge and to the Post Office.
After getting our mail envelope, we took a lunch break...
looked around and headed for Gatlinburg. 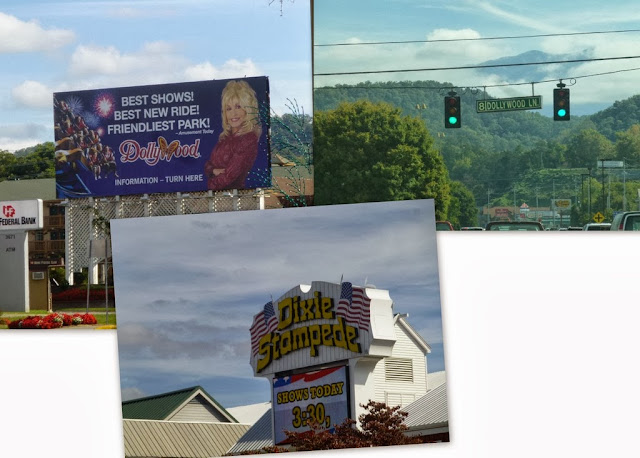 But then it happened again...
Way too many people in one little place. 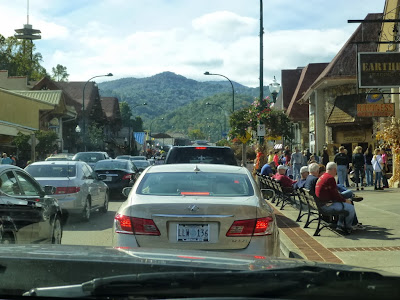 Gatlinburg
The entire stretch in and out of Gatlinburg was bumper to bumper and crowded sidewalks.
This wasn't at all what we expected out of Gatlinburg.  This looked to us to just be a tourist town with lots of places for people to eat, drink and spend money.
There was no more room for anyone to stop... even if they wanted to join the crowd.
So with us moving along so slowly, we rolled down the windows and snapped photos. 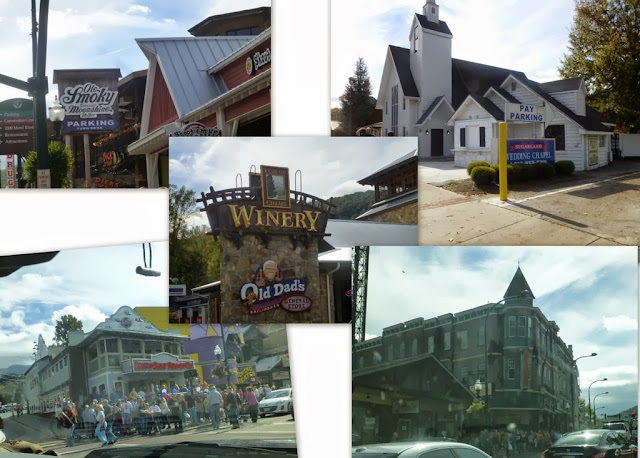 Now, tell me... if you have never been to Gatlinburg, but have wanted to visit Gatlinburg...
is THIS what you are expecting??
I'm also sure that if you HAVE truly visited Gatlinburg... you have a totally different take.
This isn't really it... is it??
﻿ 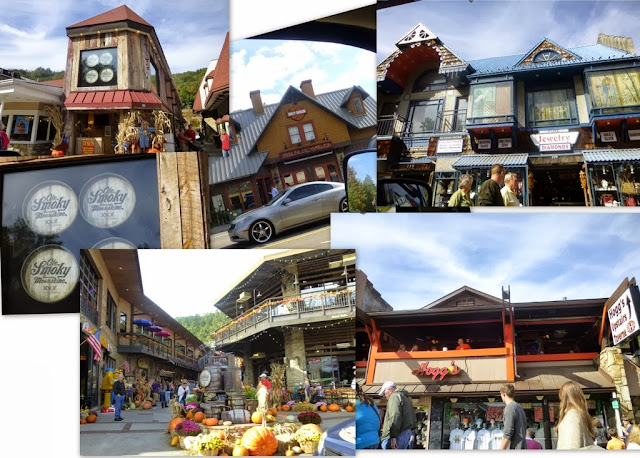 We made our way back through the Smoky Mountains... and it really was beautiful.
But we were also very happy to be HOME, out of the crowds...
even if home is in a casino parking lot!
﻿
Saturday, October 19th
Hanging Out by the creek
We had no real plans for the day, but we weren't ready to leave either.  This casino place was great.  So we stayed the day.  We walked and rode the bicycles, and went into a local shop, where as usual we saw all kinds of things that we had no use for.  We did a few projects at the wheel house, and got ready to leave in the morning.
Sunday, October 20th
Bound for South Carolina
Because we had ended up at the North Carolina end of the Great Smoky Mountains... as much as we HAD wanted to visit Nashville... we weren't going to back track to go there.  Instead, we changed our trip plans to include South Carolina and Georgia, before going to Florida.
And we've had our fill of back road experiences for now, so we are staying on the Interstates.
We found a PA park in Kinards, SC.  160 miles away.  We arrived without incident... just a few traffic jams for whatever reason. 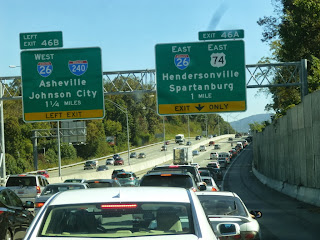 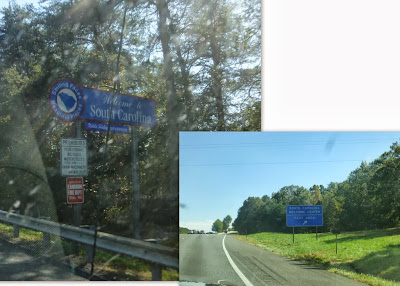 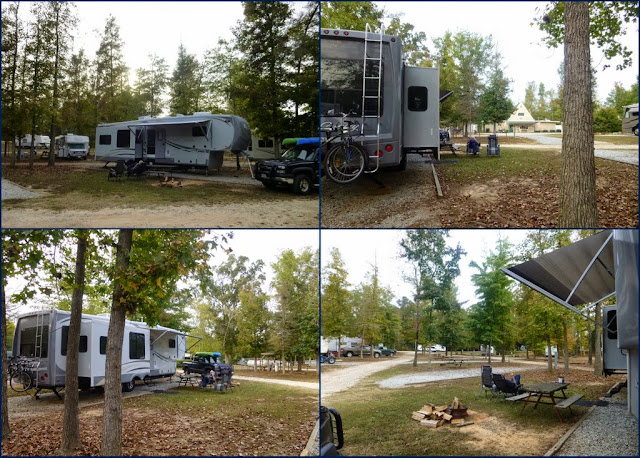 Jeff always enjoys the chance to have a good fire.﻿ 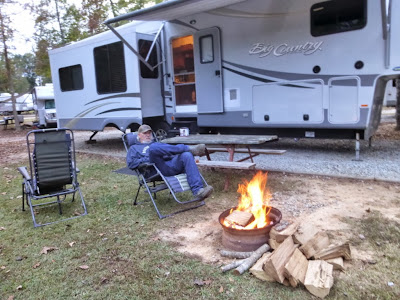 Every once in a while we get motivated to accomplish something.  Tonight it was organizing our utility closet, for me... and repairing our outside speakers, for Jeff. 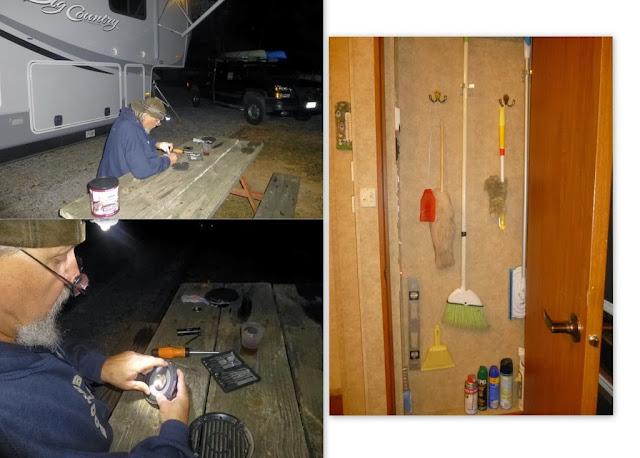 Our outdoor speakers have been blown for a long time, so we haven't been able to use them.  Tonight, Jeff took them apart and saw that they were torn around the edges.  So we got out the GOOP!  He repaired them and they sound great!!
I was tired of opening the utility door and getting hit in the head by the broom handle and having everything else fall out on the floor.  So we bought clamps to hold the handles on the wall.  It only took me 3 years to think of this!!
Tuesday, October 22nd
Travel Day
Travel Days have become simpler again.  We don't dread them so much.  We can get on an open interstate and just drive.  Today its 109 miles on I-26 then 70 miles on I-95.
WHOO HOO! I'm caught up on our travels!
Posted by The Bright's at 10:40 AM