Yesterday we spent the day touring Amish Dutch Country.  I had woke with a back muscle spasm, but I had managed to get around.

Today, was a different story.  I was going to spend the day flat on my back.
SO... our plans of the York Harley Factory were out.

I'm so glad I have an understanding husband.  He didn't hold it against me.  He took care of me.

Today was Travel Day.  Our 3 night reservation was up.  Fortunately, my back was a little better... I could get out of bed!

We had Google-Earthed both the York Harley Factory and Gettysburg Visitor Center, and saw that they did have parking for RV's.  So we set out for a travel day with stops at York and Gettysburg mapped out.

Both stops went smoothly... no getting lost or anything, but it was pouring rain all day, and the Big Rig parking lots aren't exactly close to the entrance, so we were a bit wet. 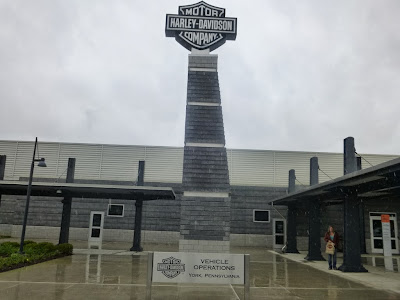 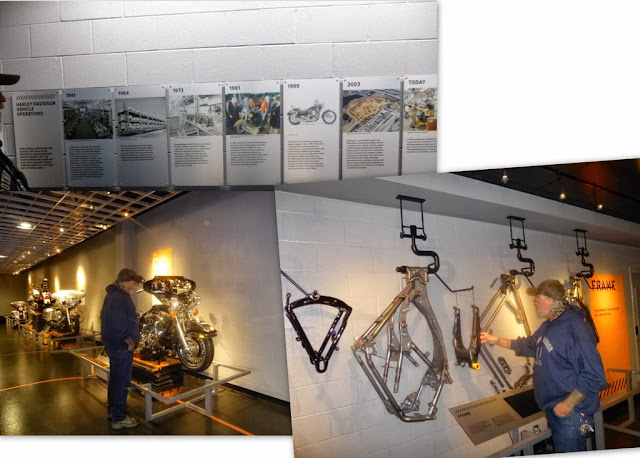 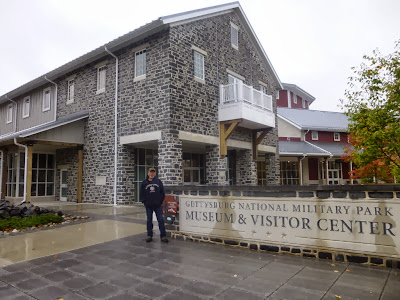 The Museum & Visitor Center is not run by the Federal Government, so it was open.
But the National Park and Battlefield were closed due to the shutdown. 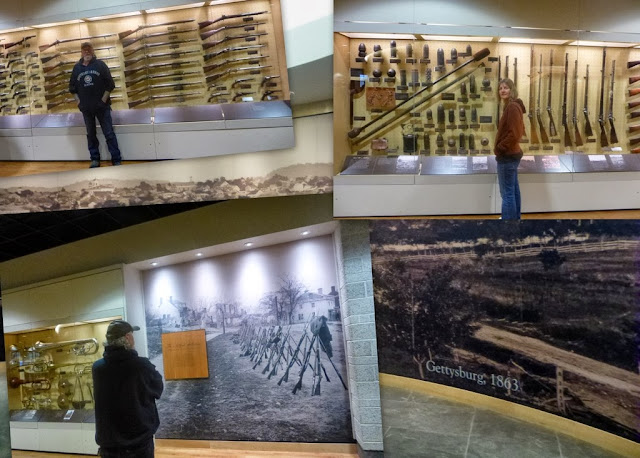 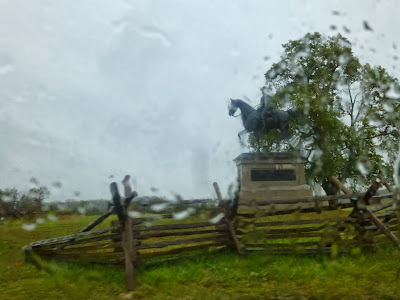 We landed at a Wal-Mart in Chambersburg, PA.  When we just need to stay the night, we are happy to stay for free in a Walmart parking lot.  This one was a good one.  It was a large parking lot so we able to park far enough away to be very comfortable.


Friday, October 11th
Happy Birthday, Mom!
Today is my Mom's 84th birthday.  Since she is in Oregon, I obviously was not there to join in the birthday celebration, but my sister Carol was there to fix her dinner and share in her special day.  Thank you Carol. 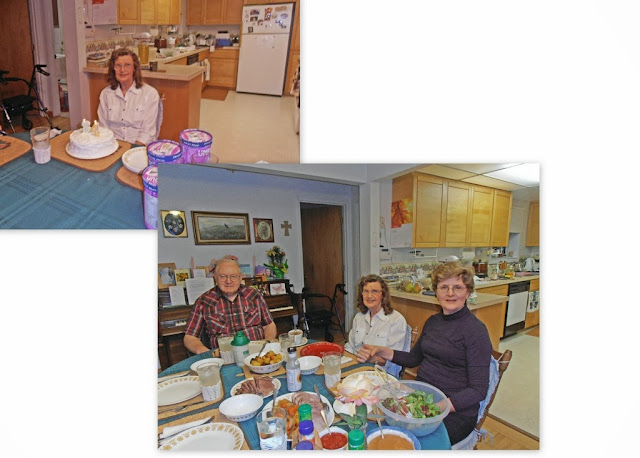 Meanwhile, back in the East...
It poured all night, so by morning, the Kayaks were full of water.  So Jeff put on his rain gear (I don't have any) and we tackled getting those weighted Kayaks off the rack and dumped.  So that this didn't keep happening, we needed to flip them over on the rack... and in order to do that we needed to remove our center bar.  So Jeff did all that, as well as replace a blown fuse under the hood. 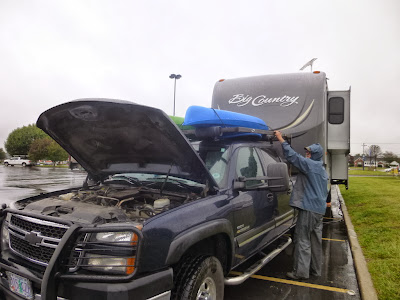 It's not always easy to get a good pic of the State sign... especially when competing with the windshield wipers! 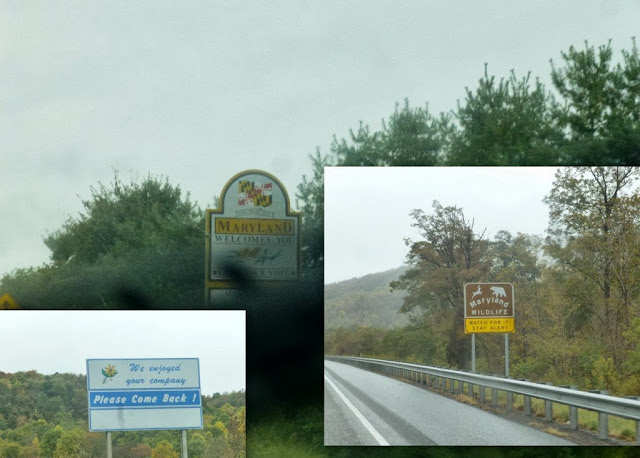 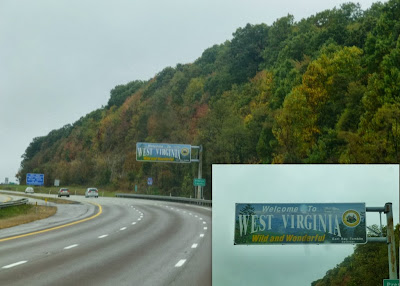 Sometimes we stop at the State Welcome Center... We did at West Virginia. 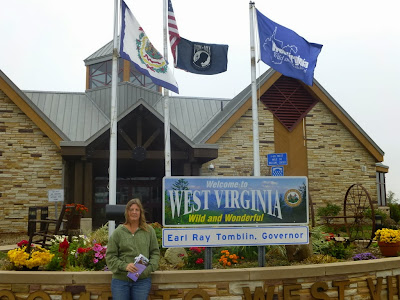 Again, we only needed a place to park for the night... so I found us another Walmart.  This one was in Clarksburg, WV.

About our Walmart stays... first I find them on our route, then I call ahead to see if they allow overnight parking, then I look the address up on Google Earth so we can see what it looks like.

This Walmart parking lot was a lot smaller, and Jeff's initial reaction was "I don't feel comfortable staying here".  But I was determined that we would make it work... so I talked him into parking, so we could walk up to Ruby Tuesday, then we would deal with it when we got back.

Our first and only experience to a Ruby Tuesday was 3 years ago in North Platte, Indiana.  and it was a great experience, so we were anxious to try it again.   This Ruby Tuesday experience was just as good, and soon Jeff was "okay" with our staying in this lot.  Yay!  Also, a couple from Ontario came in with their motorhome, so we "teamed up" and made it our own little RV park strip.  Sometimes things are more comfortable if you're not alone.

Our next planned stop was Lexington, Kentucky... 300 miles away.  We could do it in one day, but why?  So we stopped at 130 miles in Cross Lanes, WV at Mardi Gras Casino where we could stay the night for free.

This place had 3 or 4 parking lots and none of them designated for RV's... but I had called ahead and was told we were Welcome to stay the night.  Usually the thing to do is park away from the building... and with all their parking, this wasn't hard to do.  We asked the security on duty about moving to the far end of this lot and unhooking so we could go get fuel for the generator.  He didn't see a problem with it, so WHY AM I A BIG SHOT??  Because while Jeff was scouting out the parking lot, I jumped in the truck and pulled the 5er WAY across the parking lot, across a lane of traffic even... to the end of the lot.  THEN I backed us up onto some levelers!  Whoo Hoo!  Ya I know, more like "Whoopty-Do" probably... but I FELT like a big shot! 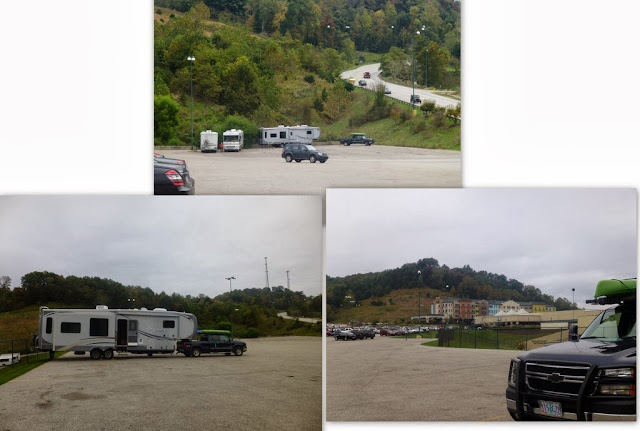 An explanation of the above collage of photos:
The top photo is where we initially parked and leveled and unhooked.
The bottom photos are where we ended up staying.  While in the casino, they paged the owner of a fifth wheel with Oregon plates... that would be us!  Jeff wasn't there at the moment, so I went to the security office and stated our case, and they stated theirs.  Apparently the night security had come on duty and they thought where we parked was unacceptable.  They wanted us to move to their undesignated "designated RV parking".  So it was a little work, but very little since we hadn't pulled the slides out... so we did.  End of Story. 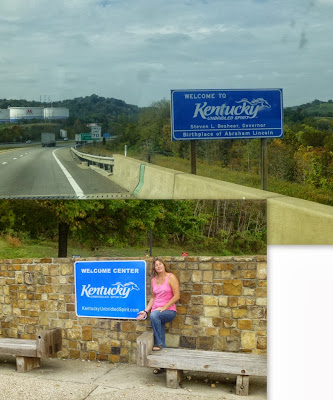 We had a reservation at Fort Boone State Park, out of Lexington, KY.  This park is popular, and not easy to get a reservation.  We managed to get a site that would accommodate us for 3 nights.
It's nice to have hookups... after 3 nights without.  Unlimited water is the best thing about hookups.  The next thing is knowing what time it is when we wake up, and not having to go turn the generator on. 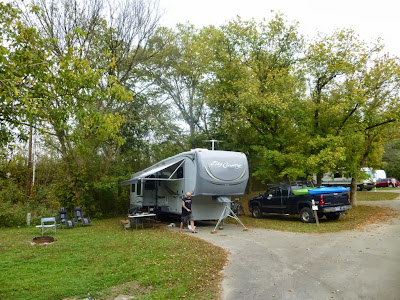 This place was SERIOUS about October and Halloween! 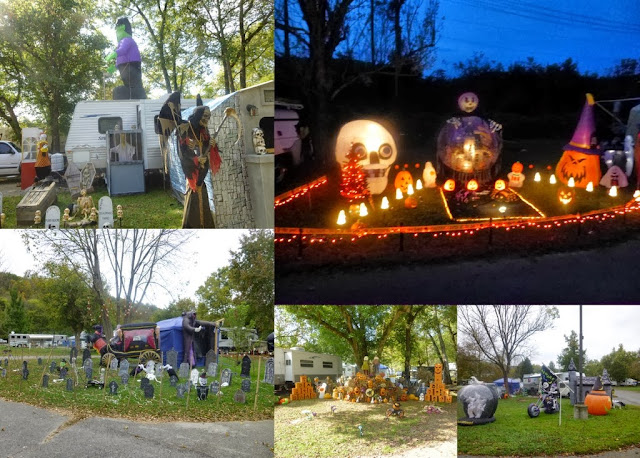 Our plans for the day were to check out Lexington.  We had some packages we needed to get put in the mail, there was a 12 mile bicycle trail called "Legacy Trail", a Harley Dealership, and there were 3 breweries in town, so we had selected one.


We took a beautiful back country road to Lexington. 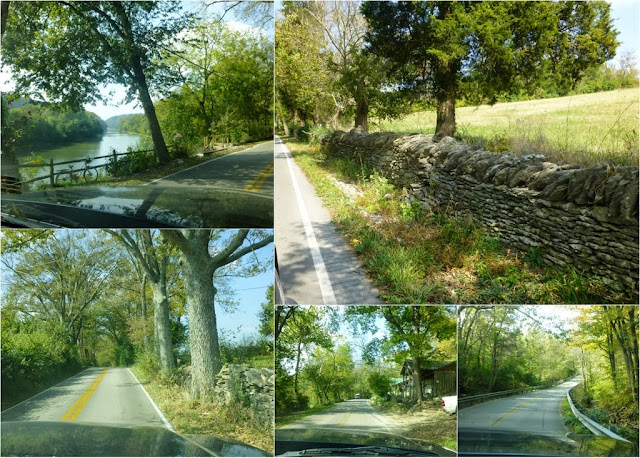 What are these?
From a distance, I thought "I didn't know tennis balls grew on trees!"
﻿ 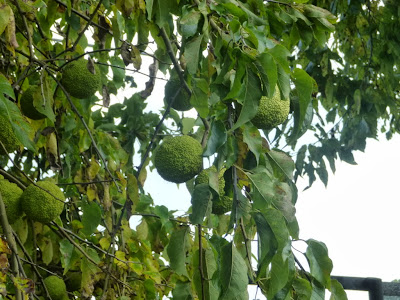 Our first stop in Lexington was to be the Post Office to get that out of the way... but nobody told us it was Columbus Day!


So we headed for the local Harley Dealership...
Man O'War Harley Davidson 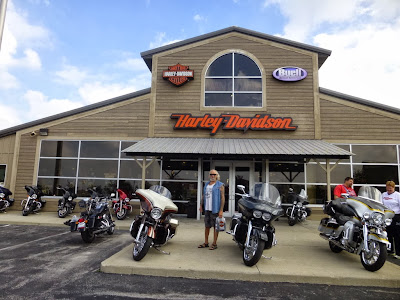 We made our usual dealership shot glass purchase


Next up was the Legacy Trail.  An access to the trail was at the YMCA. 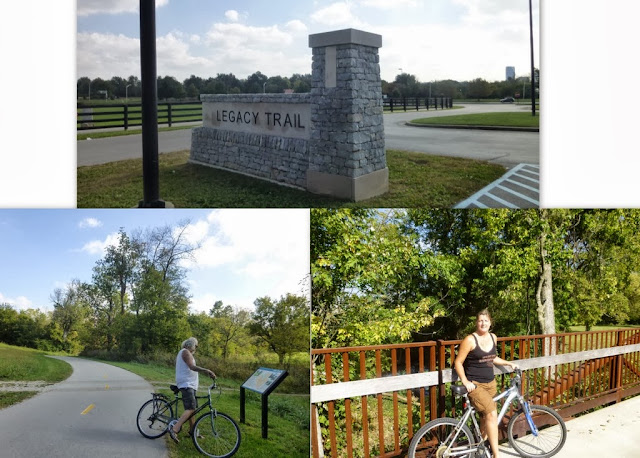 We rode only 3 miles of the trail.  There were parts of it that were nice, but much of it went through parking lots and across or along streets.  It's great that they have a designated walking or biking trail for the locals, but its not that great for visitors.

After those grueling 6 miles, we were ready for a trip to a local brewery.
We had chose WEST SIXTH BREWING.  The reason we chose it was that they had 10 beers on Tap that were ALL their brews.  When we go to a brewery, it is to experience THEIR brews.  To me, a brewery with 32 beers on tap, with only 3 of them being their own... is no different than going to any bar. 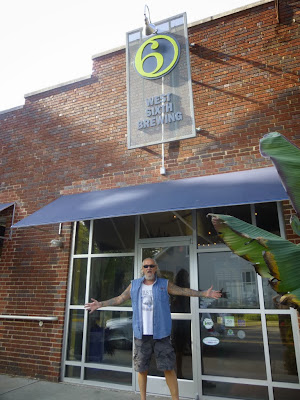 Jeff selected their West Sixth IPA (of course) and after tasting a few, I went with their Pumpkin Ale.
Both were very good. 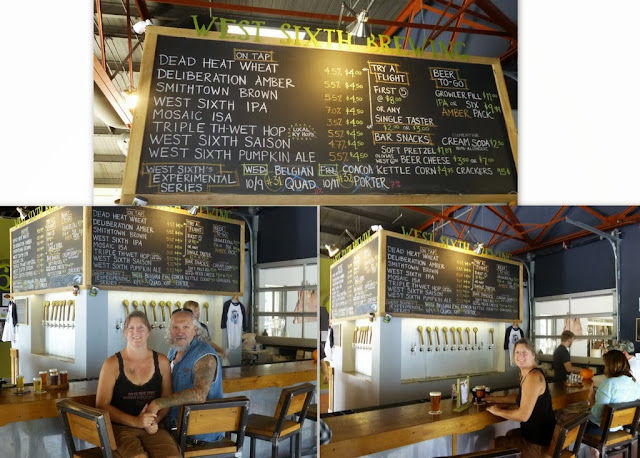 Our bartender was Aaron... who was very friendly and eager to please.  He was good at his job.
When he went off duty, he sat down with us and chatted until we left.

Although it wasn't real warm, it was warm enough... and we were eager to get the kayaks in some water.  Besides, when would we be on the Kentucky River again? 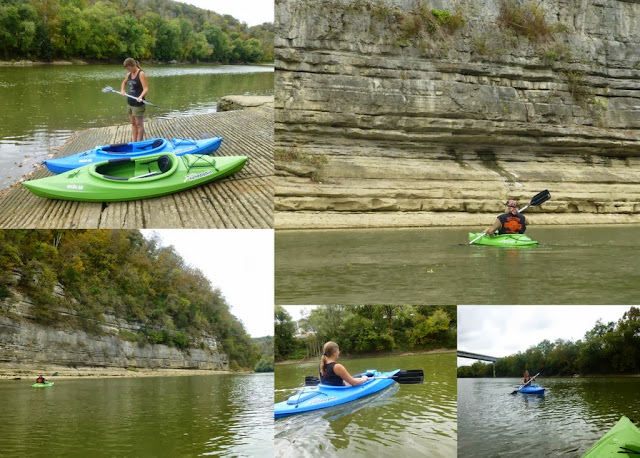 It wasn't the most beautiful water, for sure...
but there is history here! 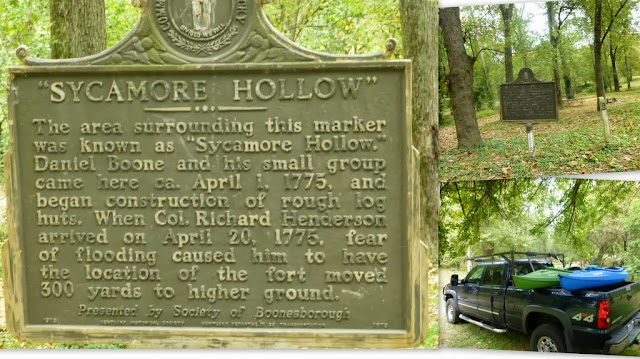 Ever watch the show "Daniel Boone"?  This is his territory.

After our kayaking, we went over to the Fort, only to find it closed.  So we drove into Winchester to look around and finally mail our packages.  We got the packages mailed, but didn't really see anything else we wanted to see.  So we went home and did laundry!

Today was travel day... we would have stayed put another day or so, but our reservation was up and someone else was coming in.

Before we hooked up, we drove over to the Fort.  It was open, but even though we were staying at the park, they wanted $8 per person to look around.  We thought that was ridiculous... so we took a few photos and left.
Fort Boonseborough﻿ 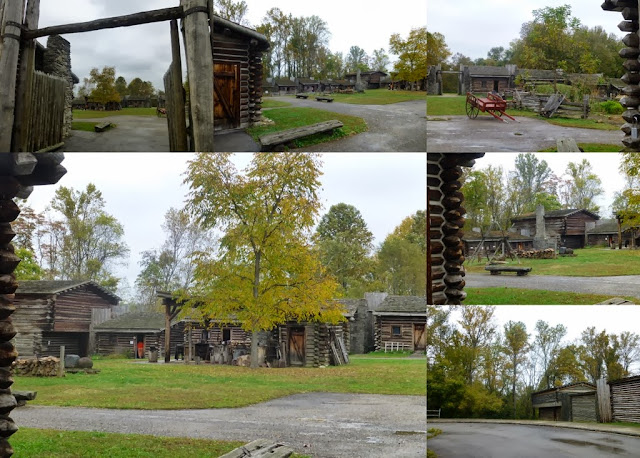 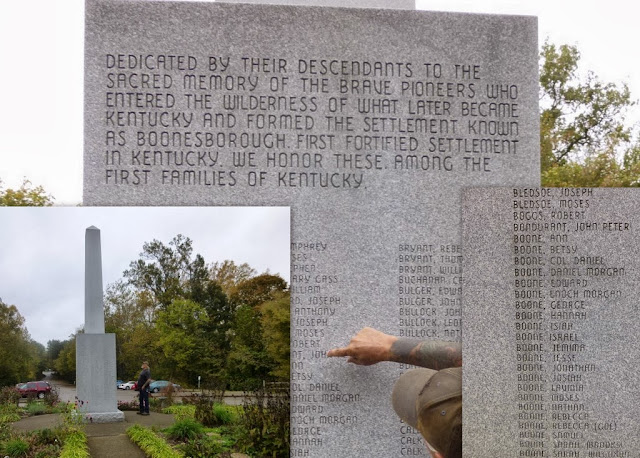 After our brief visit, we hit the road for Tennessee.  But this is the end of this post.
I will pick up here on the next post!
Hope you're enjoying where you're at!
Thanks for checking in.
Posted by The Bright's at 8:15 PM