Saturday, October 5th
One of our Shortest travel days, and maybe our Worst!

The day started with us leaving the Wompatuck SP near Boston, and on the way out coming across a bicycle event where they had placed an inflatable arch across the road!!  What??  We would not fit under this arch.  This is the road in and out of the park... the park has RV's.  What were they thinking??  One of the event workers stopped us and said "you wont fit under there... you will have to turn around"  Two Words I had for her... DUH  and  NO!

We were there awhile... so I'll just jump to the resolution.  What we DIDN'T do was take a knife to their inflatable arch so we and other RV's could cross.  What we DID do was back-up with Rangers controlling traffic, and follow the lead of a Ranger to another way out.
End of that Story... Just the Beginning of the Stress.

Traveling these New England States pulling a fifth-wheel trailer is not our idea of a good time.  It can be beautiful, but the navigating, and constant maneuvering keeps us from viewing much from the road.  We have found roads to be poorly maintained with potholes, low hanging branches, narrow with power poles or mail boxes nearly on the road, signs hidden by bushes, and careless drivers.

And even the highways, whether they are State highways or Interstates... they just wind around all over the place!  It's not like in the West, where we can pick a route and stay on it.
I am not criticizing here... this is just the way it is because these States are so much older and so populated!  But it's not what we are used to nor are we comfortable with it.

By the time we arrived at our first stop, we were frazzled and cranky.  We needed fuel, and could not find an RV friendly diesel stop.
We ended up staying in the parking lot of Twin River Casino in Rhode Island.

We didn't play a lot, but we did check it out, and relaxed in our little cozy home... dreading tackling the roads again tomorrow... but hopeful that traffic would be light with it being Sunday.

I recently posted "3 States in 1 Day" and thought that was good.  But now we beat that!  It sounds impressive... but its not that hard in some places of the United States.

We left the Casino lot around 10:00.
We drove from Rhode Island to Connecticut to New York to Pennsylvania. 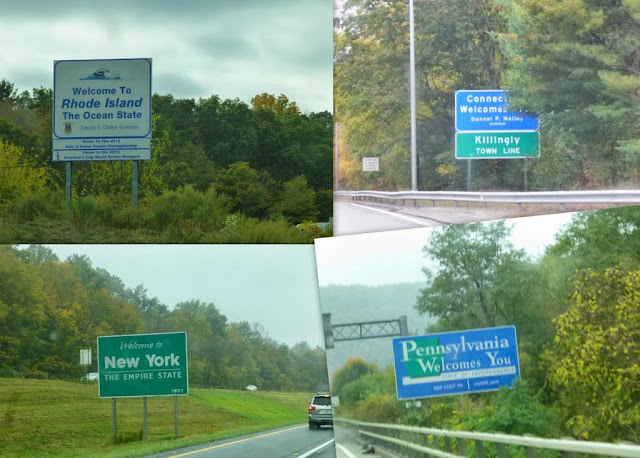 It was a rainy day, but not bad.  The day started with our missing the turn for our first highway of the day.  So I did my own "recalculating" and we got turned around and back on our planned route.

Like I said... we had been unable to find a fuel stop.  So the night before, using my map program and Google Earth, I found a gas station on US-6 with a diesel pump that looked like we could get into.  We did... but not without a lot of contemplating and maneuvering.

So now we had a full tank... that took a lot of the stress off!

Since it was Sunday, which usually means less traffic, we were going to attempt a 300+ mile day to hopefully get us out of the "rat race".
It turned out to be a better drive day, although at first we had our usual road changes, and frustrations with no truck stops, no rest areas, no convenient pull-offs.  Finally... once in New York, there was a Rest Area! 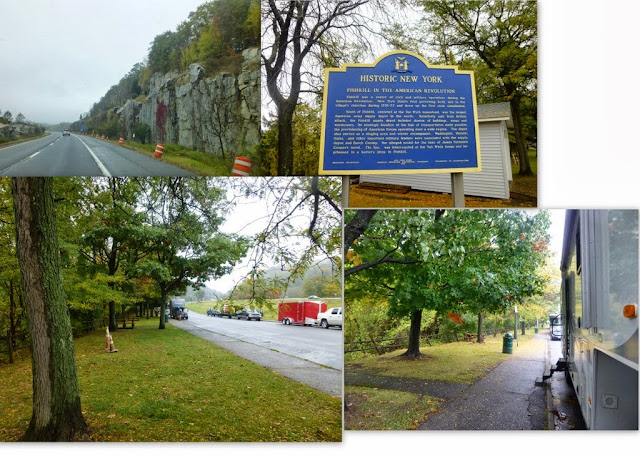 I didn't have to beg Jeff NOT to take this exit... 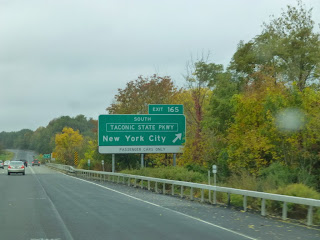 I found a Wal-Mart in Wilkes-Barre, PA that we could stay at...
and this turned out to be our best Wal-Mart or Casino boondocking stay yet! 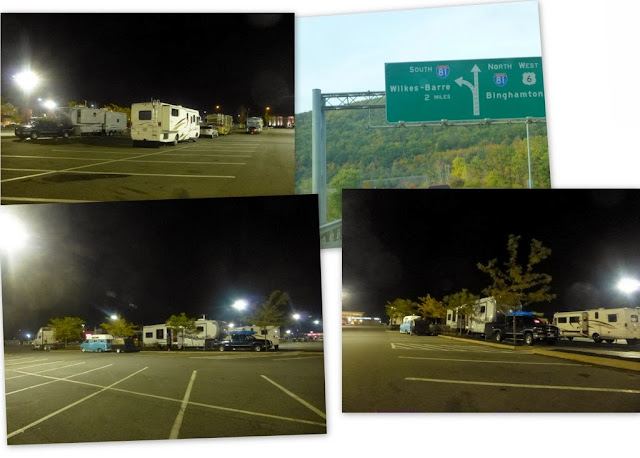 It wasn't just a Wal-Mart... it was a plaza with many stores, and many restaurants.
We walked across the parking lot to Red Robin and had a wonderful dinner and a few beers with good fun service... for a great price!
Then we walked home and watched the evening football game!
There's just something about knowing you're being self-sufficient.  I love stays like this!

The next morning we debated on what to do.  We had dry camped for 2 days and were low on generator fuel and fresh water.  But there were storm warnings in effect.  We don't like to drive in high winds or pouring rain or especially be on an open freeway with a tornado!  And that was the forecast warning for the day.

The weather was calm at the moment, and given our situation, we made the decision to travel.
We hadn't gone far before the storm rolled in.  First the winds that blew us around a bit and some rain... then sheet rain that windshield wipers cant keep up with, and fog.  But we didn't get hit by a tornado!!

With the help of our Guardian Angels, we arrived safely at our destination in Lancaster, PA.
Having missed visiting an Amish community in Ohio, that was our reason for coming to Lancaster.

We selected a site, set up, and stayed put... Except for going out to do laundry.  We were soaked from head to toe from our earlier fuel stop, then selecting and setting up at our site.  So doing laundry was a must... but that was all we were doing.  This was another day that left us a bit frazzled.

We woke up refreshed and ready to see the area.
First stop...  Lancaster Visitor Center. 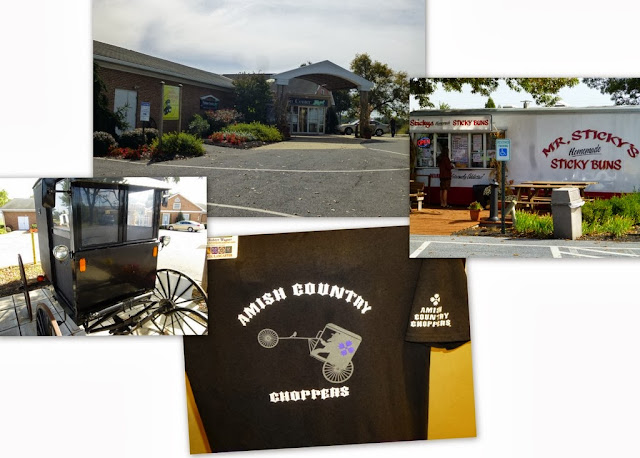 We sometimes just look around at Visitor Centers, and grab a few brochures that may be helpful, but this place had way too much to figure out things for ourselves.  So we asked one of the men at the counter for some advice.  He took out a map of Lancaster County, and highlighted spots where we may want to stop.  We had told him that we were looking to see the Amish farms, so he pointed out back roads where the Amish live.  He let us know that any of the stores along the main streets were not operated by the Amish... that if the Amish sold any goods there would be a sign at their driveway.  He pointed out one Amish farm where the family had set up a storefront out front of their farm... so that was one definite stop for us.

So with map in hand...  we were off to visit Amish country!


Our first stop on our "tour" was Kitchen Kettle Village in Intercourse, PA.
We really had no interest in this place... to us it was just another tourist trap.
But they had a parking lot, so we could walk down the road a bit...
﻿ 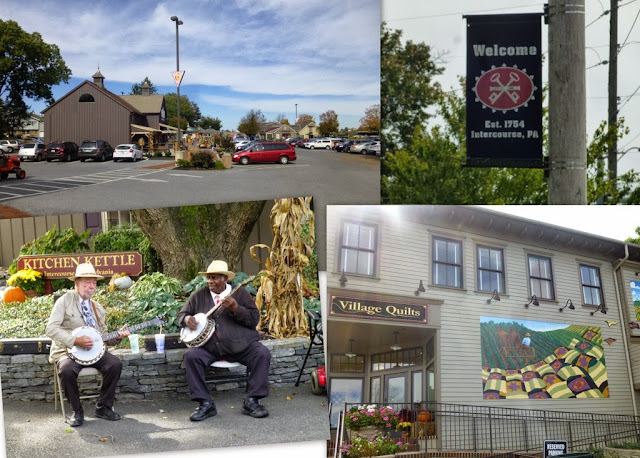 I'll let the pictures speak for themselves... these are a few of our favorites. 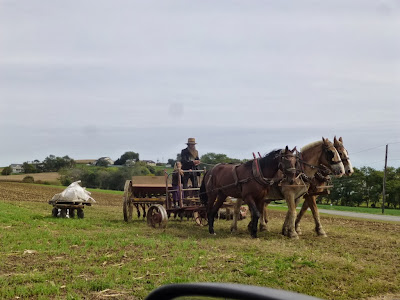 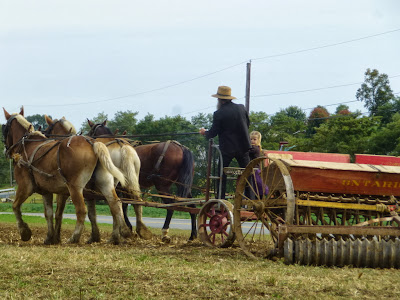 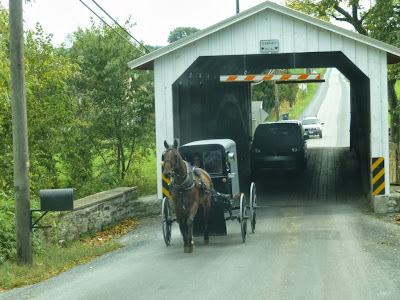 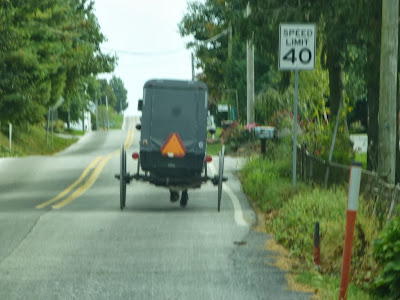 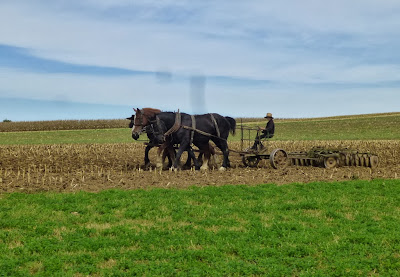 This is something we don't see at Costco in Oregon!﻿﻿ 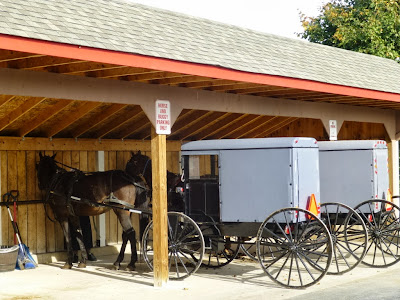 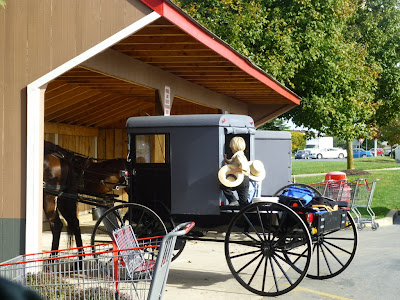 Coming and Going through the City of Lancaster was a little stressful... really narrow, crowded streets.  But I thought this was interesting.  The buildings, which seemed to be residences, were connected into continuous walls. 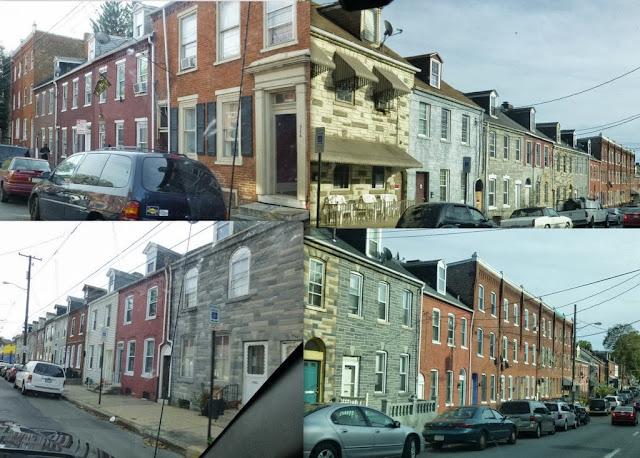 Sorry I am so late on my posts.
We are in Kentucky as I complete this post.  Hopefully I can get another post done soon.
Thank you for reading... We do appreciate you checking in on us.