What took us so long??

We've been full-time RVing for nearing 4 years now... and we just now made it to Florida?  What took us so long?  It may have something to do with the fact that it is 3000 miles from our home base.  But I'm so glad we finally did it.  We didn't know what we were missing.  The Emerald Coast is Incredible!

We have the bay right out the back door, and we're able to lock our kayaks up "on the dock of the bay",  so we're able to go out in the kayaks anytime. 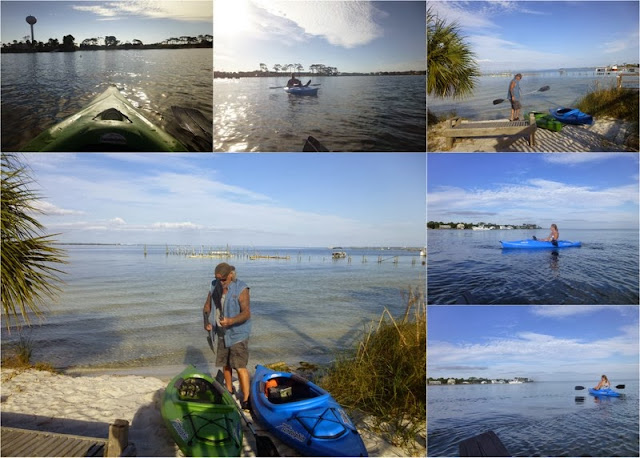 The other afternoon was especially exciting.  There were many dolphins jumping and showing off their acrobatics... and we had a front row seat!   Unfortunately, we hadn't taken the camera out.  I doubt that we would have lucked out with our timing for a good action photo anyway.

We checked out the Destin Harbor Walk another day.  Not Impressive.  We couldn't find a parking space on the weekend, so we tried again during the week.  We found a parking space, but half the shops were closed! 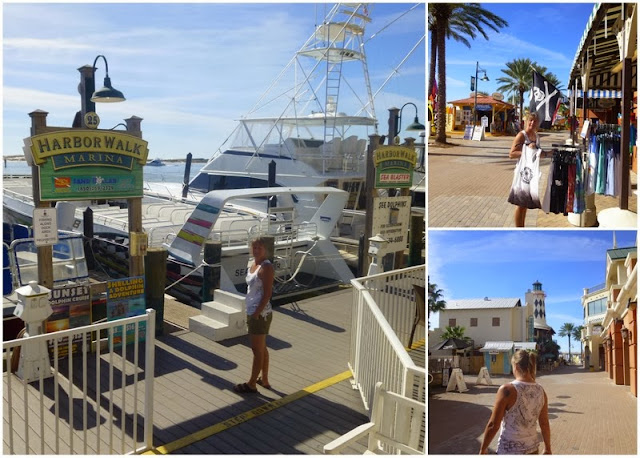 One thing is a given... EVERY day, we visit the Gulf.  I get excited about it every day.  Every day it's different on the ocean.  Some days it's all calm... other days it has 6 foot waves!  I like it all. 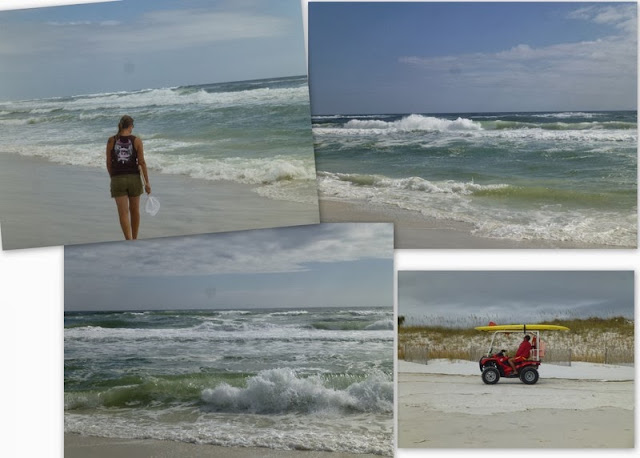 We've really got into collecting shells.  We've even lost a phone because of going too far into the waves in search of that seashell. 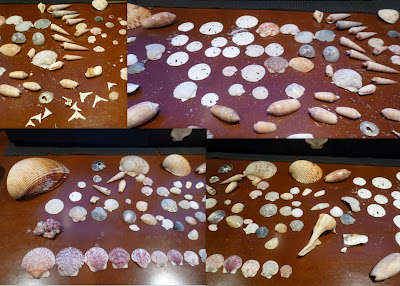 That is from many days ago... our collection has grown MUCH bigger an much more impressive!

We do plan to get some maintenance done while here, though.  Some of the rubber stripping on our slides was totally dissolved, so we ordered new stripping from the factory, and replaced it.

We also noticed that the trailer tires have become really worn, just on the inside... but I calculated the mileage on these tires, and it's over 23k miles!  So we will just get new tires.  Taking the truck in for new tires is one thing, but hauling our home in, is another thing... as most of my readers know!  So we were thrilled when we came back from the beach yesterday, and there was a mobile tire service at another site.  So we spoke to them and they will be replacing our tires tomorrow!

We were happy to have a visit from RV friends, Duane and Louise, yesterday.  We met on the beach, then had dinner together.  It was great seeing them again.  Hopefully, we will meet up again in Arizona or California.  If its in California, then we will have a motorcycle with us again, and we can ride together. 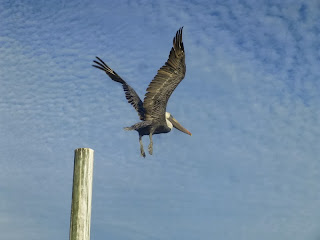 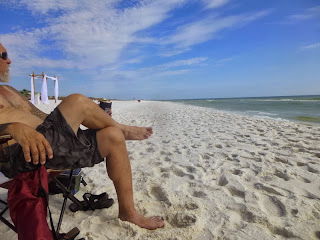 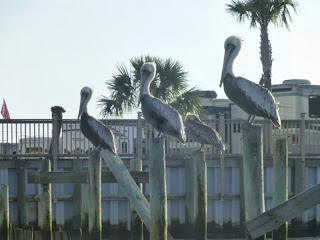 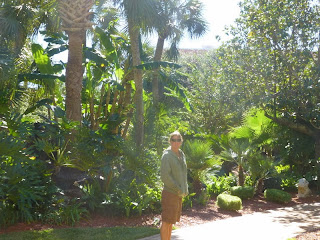 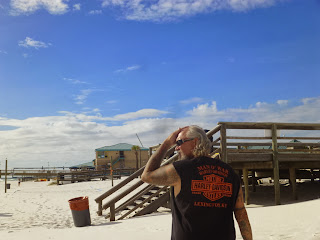 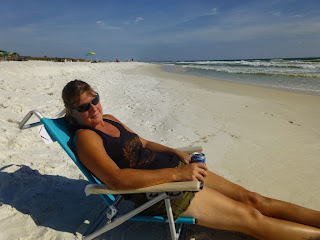 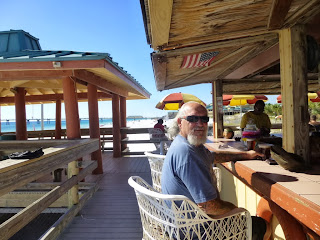 Lovin' life here on Florida's Emerald Coast... Where are you lovin' life?

Email ThisBlogThis!Share to TwitterShare to FacebookShare to Pinterest
Labels: Florida

Yep!  I'm not sure it can get much better than this.  We are settled in on the Emerald Coast of Florida. 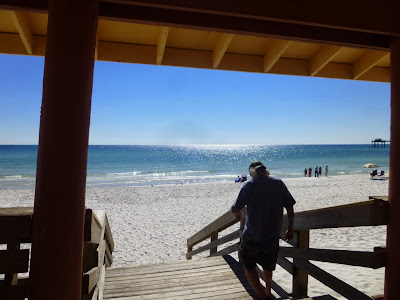 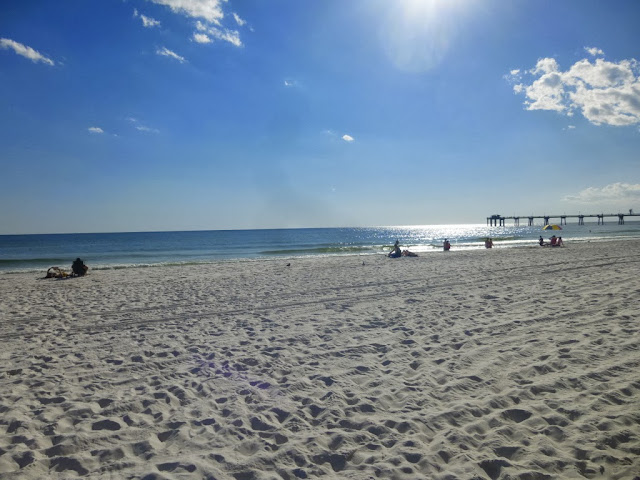 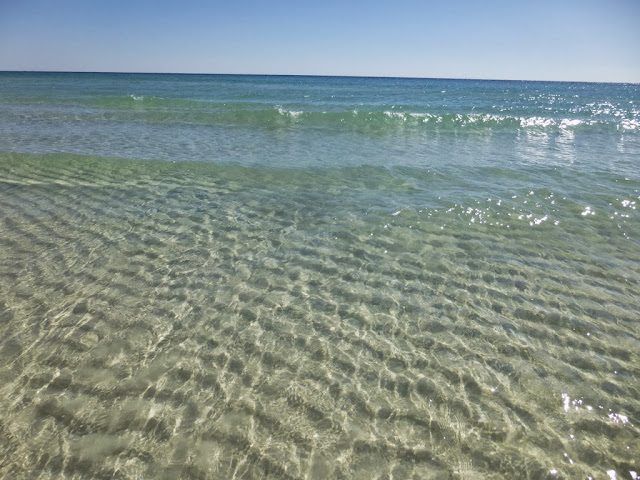 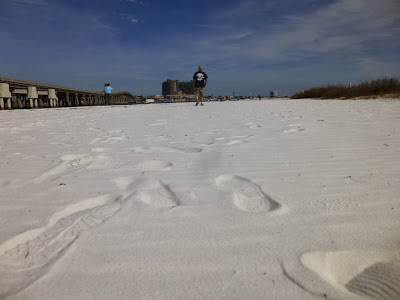 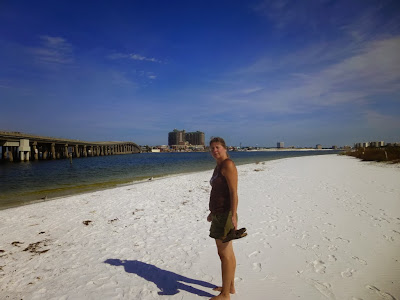 We arrived in The Sunshine State on October 27th. 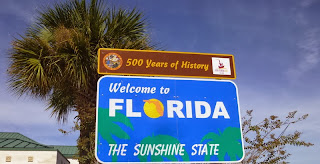 We were headed for the St Augustine area, but I found a PA park in Jacksonville, which was an easy on/off of I-95, and that's a plus... we've had our fill of stressful situations.
We settled into Pecan Park RV Resort for a good price.  This park has all large pull-thru sites... its very nice.  Just one downfall.  It's near an Airport... and Air Force Base.  Every day, every night, there are planes flying over the park... and not just the park in general, but it seemed like they flew over our site in particular!  We got to enjoy watching some great maneuvers! but at other times it was just irritating! 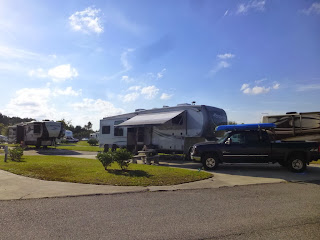 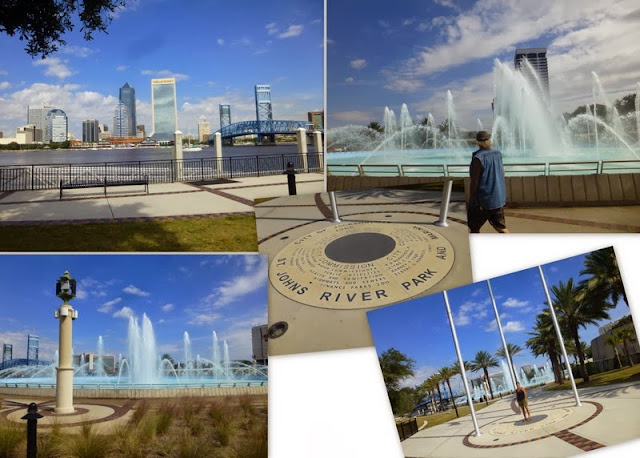 ...and of course, we checked out the brewery that was right there.  As I do sometimes, when they offer it... I ordered their sampler tray of 6 brews.   I had to say that I didn't like any of their beers.  All of their brews were boring... very blah.  Have I become a beer snob? 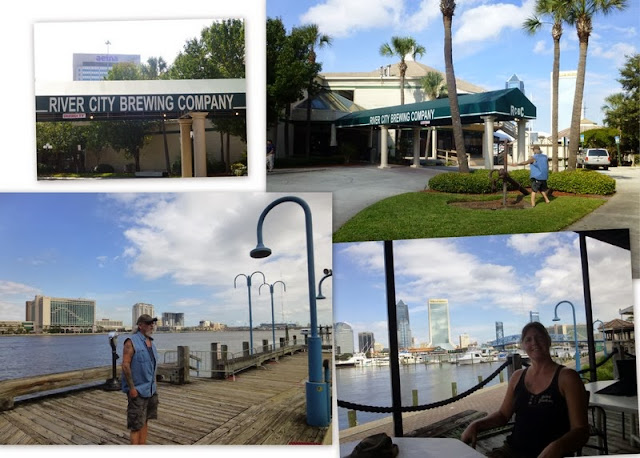 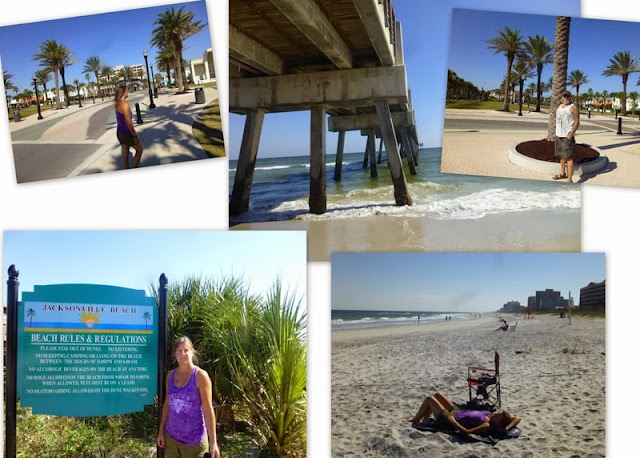 What a beautiful place!  and there was next to nobody there!  We had a free parking lot to ourselves!

From Jacksonville, we headed in the direction of our one month reservation in Ft Walton Beach.  It was about 360 miles, and we had a stop planned for Compass Lake, North of Panama City.  I found us a PA park about 190 miles down the road, conveniently off of I-10. 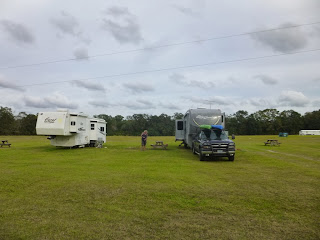 Don't be fooled by the other fifth wheel there... they weren't really there.  We were the only RVers.  Such a shame for this jewel of a park.  It was Halloween night, so we would have stayed in a Walmart parking lot, but who knows what will happen in a Wal-Mart parking lot on Halloween night.

After we were parked, we wondered why we had stopped.  I guess because lately, when we get close to 200 miles, Jeff has had it.  But this night he said he could have easily kept going.  Oh Well... we can't always do everything perfect!

The next day we didn't have far to travel.  I found another PA park, just 5 miles from Compass Lake.
It started pouring rain shortly after we headed out.  Not fun... the windshield wipers couldn't keep up.
Pine Lake RV Park looked like another "jewel" from the condition of their sign... but we were greeted by a very friendly young lady, and were escorted to our plenty spacious pull-thru site.  It was a nice park, with the exception of the site being red dirt, which turned to thick sticky red mud in the rain. 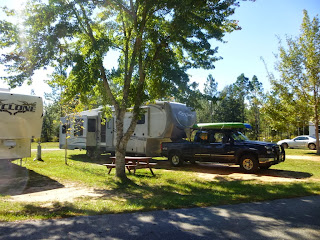 But the storm stopped, and we were able to drive up to Compass Lake.
So what was at Compass Lake?
Our friend from Oregon owns 2 lots in a subdivision along the lake.  She hadn't seen her property in over 20 years, so we told her we would check on it for her.  Problem was, she couldn't tell us anything except the lot #s and some coordinates.  We drove all around, and finally called a realtor who had a sign posted on one of the roads.  He was so friendly and helpful.  He was able to look up the lots, and he knew them well.  He stayed on the phone and directed us to the sites. 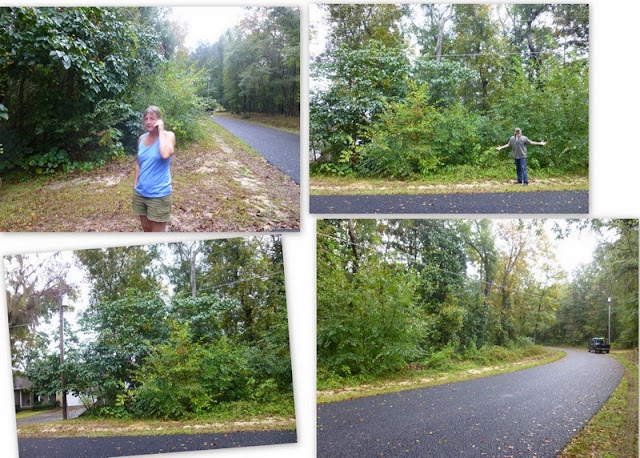 We were thrilled to actually locate her property, and get some pictures for her.  And maybe she will take advantage of this contact we made with a realtor, and he can sell her property!

That was all we had to do there, so we stayed only one night at Pine Lake RV Park, and set out the next morning for Ft Walton Beach.  But HAVENT WE LEARNED NOT TO TRAVEL ON SATURDAY??  I guess not. 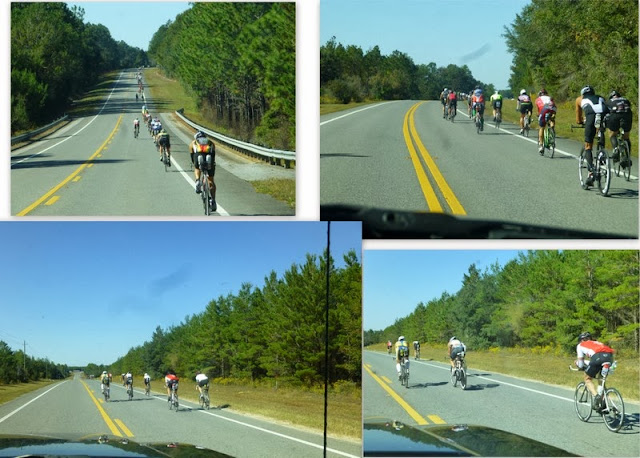 For MILES... we followed and attempted to pass or drive along side this.  The Iron Man bicycle race... which was part of a Triathalon, I think.  Really??  Shouldn't they just close the roads for a couple hours as they pass thru areas??  This was an accident waiting to happen, and I really didn't want to be part of it.

and are we ever glad to be here.﻿ 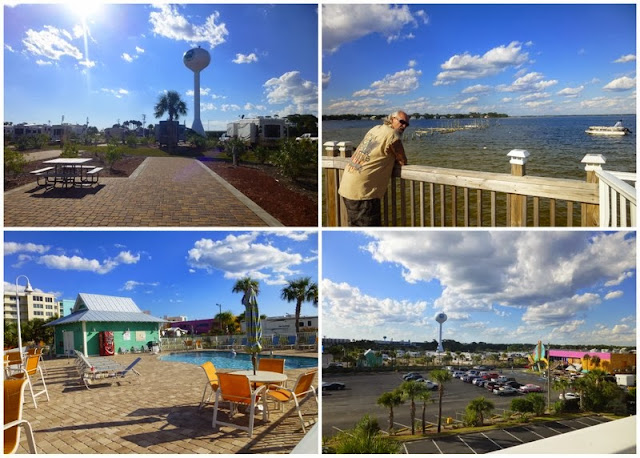 The Bay is just out our door at the park.
Birds, Stingrays, creatures in shells, fish, and water awaiting our kayaks! 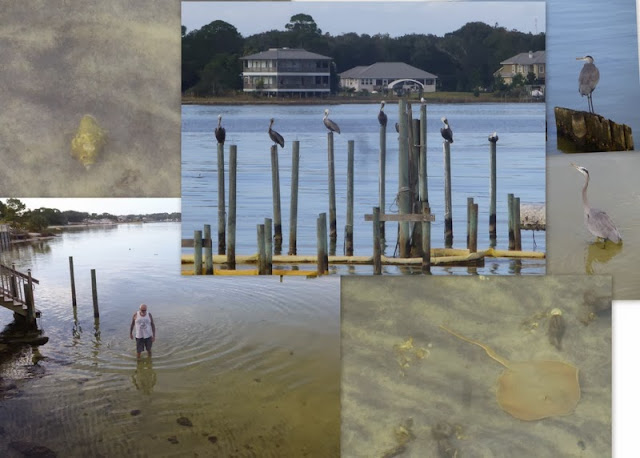 The Gulf is just across the street.  There is a Skyway pedestrian bridge if we choose not to dodge the oncoming cars, or there is parking for us if choose to drive over (not necessary).
What an incredibly beautiful beach. 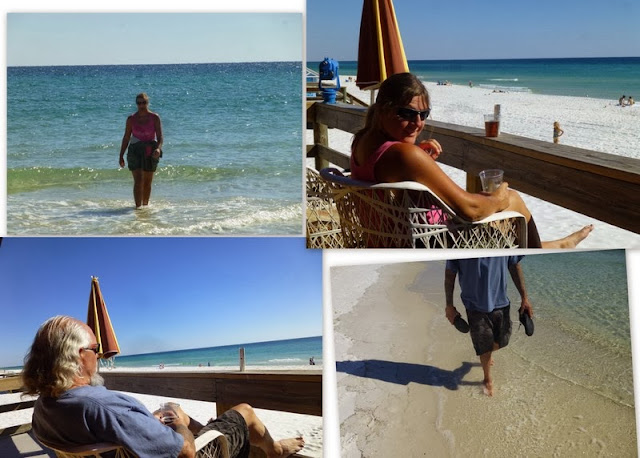 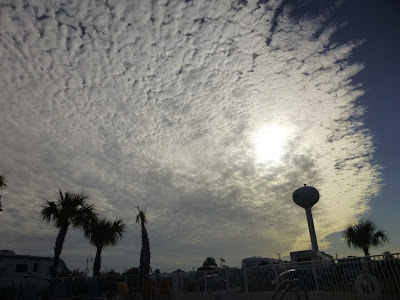 We are here for the month of November, and looking forward to enjoying all of it.

oh... Did any of you watch Billy Graham's message of Hope for America last night?  At 95, he still had a good message for all of us... the message of The Cross.  All we need is JESUS.  He remains... the One True GOD.