South Dakota to Wyoming to Montana

I had so many ideas for a blog title, but which one???  So this is it.
Here are the runners up:
Singin in the wind.... Dodging Goliath Grasshoppers.... Yet another Tire!
But after how our ride ended today, I had lost my excitement for any of those titles or the story they told.

We stayed in Sundance, Wyoming last night.  Yesterday started later than usual so we could get the front tire on Jeffs bike replaced.  The Yamaha dealership was next door to our motel in Sturgis, and they got his bike right in.  We were pleased... they know what they are doing, they have the same tires as are put on at a Harley shop... but for alot less.  But that is now 3 tires out of 4... for a total of $800... This trip is getting real expensive!

We saw a lot on our ride yesterday, but it was partly cloudy and cool... infact, I was cold much of the ride.  After the tire replacement, we still fit in all this!! 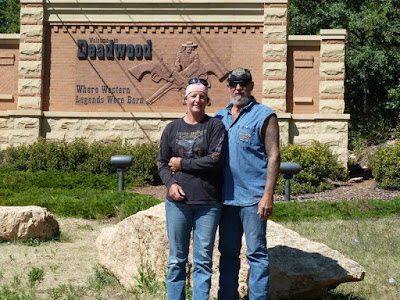 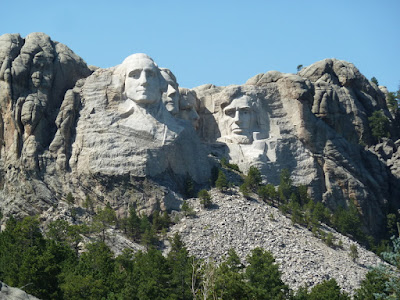 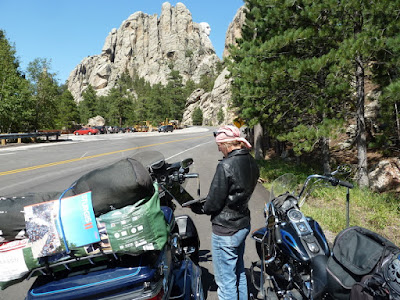 Before leaving the area, we stopped to refresh our mind on our route.  We try to plan out the most scenic routes.  On our phone was a message from Alan and Phyllis... RV friends from New Mexico... they saw our blog, and were calling to let us know that they were in Custer State Park.  Well, thats where we were headed.  We took the route through the park as planned, and met up with them for lunch in Custer, SD. 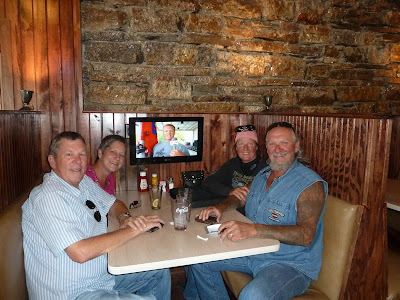 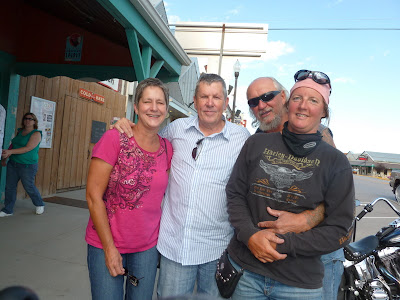 After saying our Hellos and Good-Byes... we continued on. 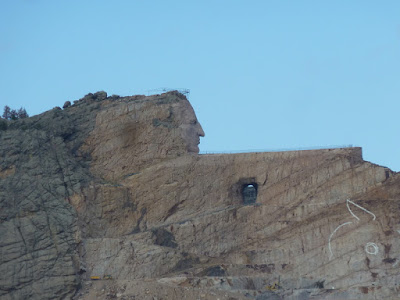 The plan had been to make it to Devils Tower... but at Sundance, we decided to stop for the night.  It was already 7:30. 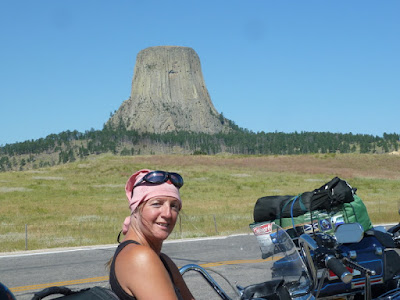 We stopped for a breakfast / lunch in Hulett, Wyoming 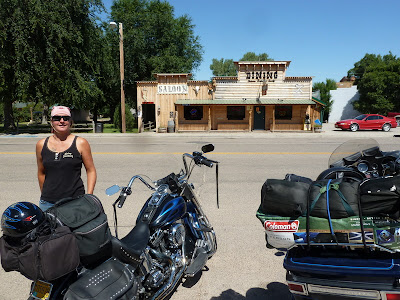 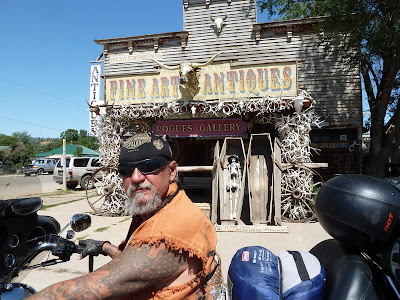 Then we enjoyed an awesome ride up the 112 into Montana... 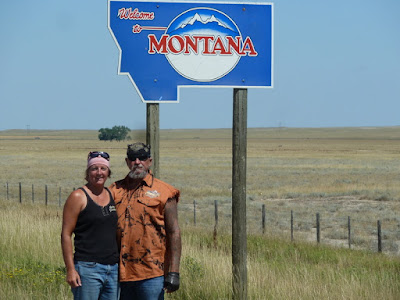 Then we took the 212, which would take us all the way to Crows Agency...  with a couple more brief stops to cool us off. 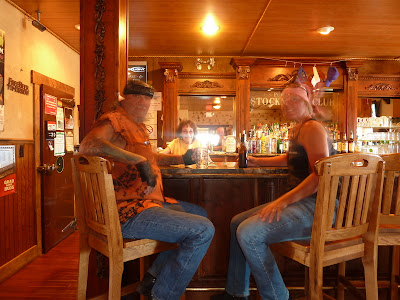 The ride was awesome... 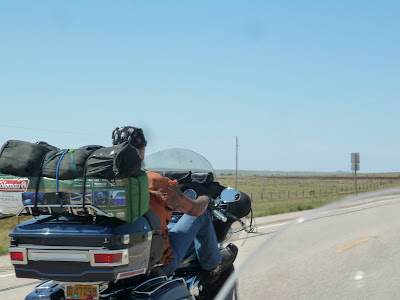 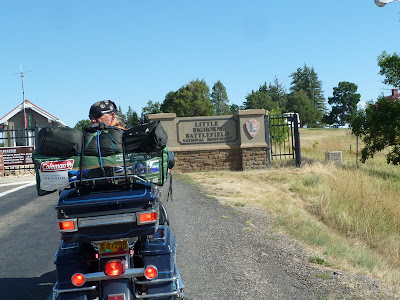 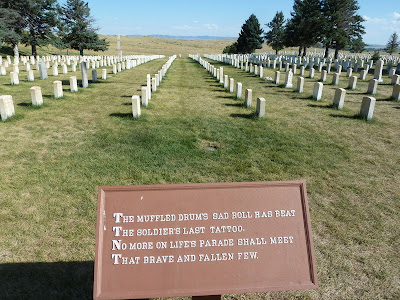 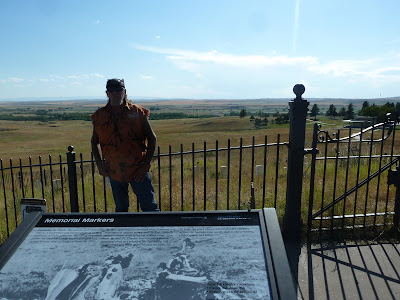 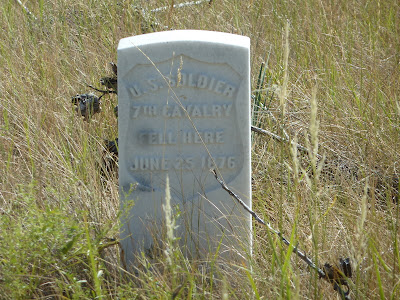 There are trails and a 5 mile road to follow to view all the graves of where soldiers fell... but by then I was overheating.  So we went to the cafe/gift shop/museum across the road to cool off. 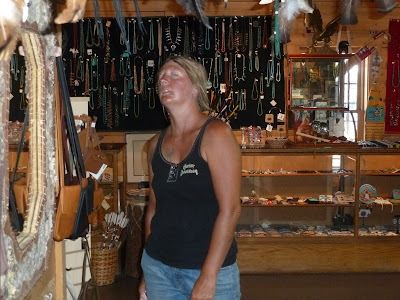 I found an Air Conditioner vent, and just stood there... trying to cool down.

Then we looked around a little more... 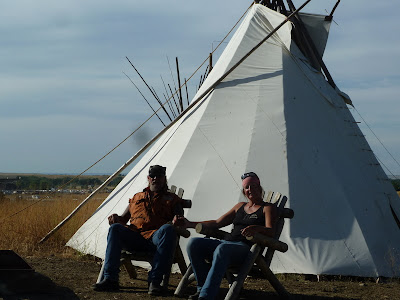 and headed out for the final leg of todays trip.. West on the I-90 to Billings, MT. 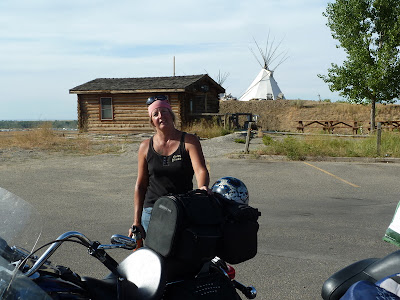 As soon as we headed West, we saw the dark thunder clouds.  So we set our speed at 75mph, to make it as far as we could before we were hit with rain.  Lightning was striking all around us, which made me nervous, but the rain was still off in the distance.  I was so hot... I was actually welcoming the thought of rain to cool me off.
But THEN....
A furious Wind suddenly hit!.  I slowed to 50... then I had to pull over to the side and put my flashers on as I poked along trying to keep the bike on the two wheels.  Jeff was getting tossed all over, as well, but he didnt let him freak him out like I did.   We stopped at one point, and I just wanted to wait it out. It was rocking our bikes all over, and we had trouble just holding ourselves up.  But the rain was coming and we had only a few miles remaining, so we kept on, and took the first exit with a motel.  I want to find out the speed of these wind gusts, because they were FURIOUS and they freaked me out!

BUT WE MADE IT!!!  Thank You once again GOD!!
I thought my hands would have to be pried off my handlebars, and I was shaking when we arrived at a motel.  Its a real nice place and a little more expensive than we normally pay, but tonight, I didnt care!  I was just glad to be safe once again.

although.... I havent been able to upload all the pictures yet.  Maybe later tonight.