We left Maine today...
but this post is of our last stay in Maine.  We found a Passport America park off the beaten path. 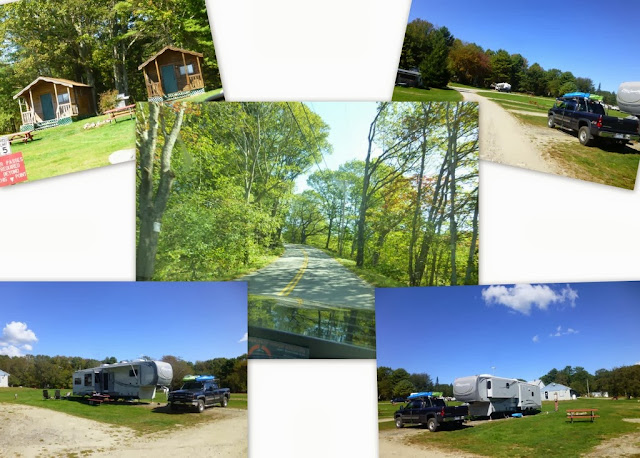 Meadowbrook Campground was a nice place to stay... once we got there!  The center picture above is the road to the park... and that picture is certainly not the worst part.  The road surface is really bad and the road is very narrow with lots of blind corners.  But once there, it was quiet, spacious, with good Wi-Fi and plenty of TV Antenna channels.

Saturday we set out to go kayaking and enjoy some beach time.  Popham Beach is a popular Maine beach, and only 8 miles from the campground.  BUT... the man at the entry booth suggested we NOT put the kayaks in there... and although the beach from a distance looked nice, it was a little chilly AND they wanted $12 for us to visit their beach... even if only for 30 minutes to walk along the beach.  That's just Crazy.  So we didn't stay.

The "man in the booth" had suggested that we go down the road to Fort Popham, to put the kayaks in.  So we followed his directions.  It DID look like a good place to put the kayaks in... IF we could park!  Apparently someone was having their wedding there.  Oh well... we would hope to get our kayaks in somewhere else soon. 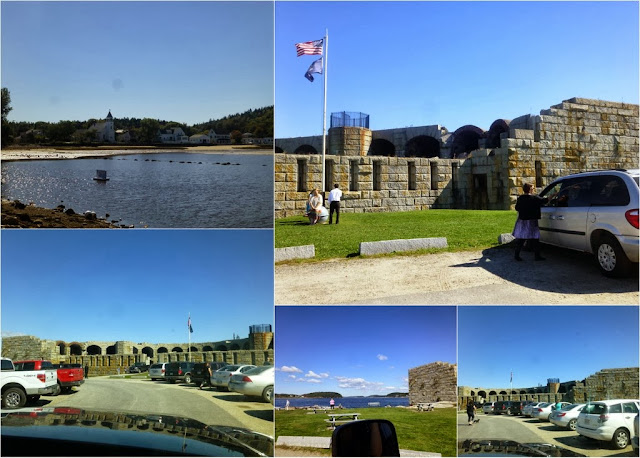 Fort Popham was built in 1861 for use during the Civil War.  Modifications were made and the fort used again in the Spanish American War and World War 1. 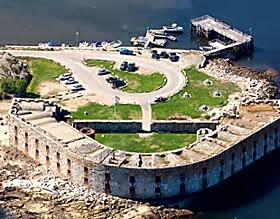 So with the plan of Kayaking out of the picture...  We decided to go to Boothbay Harbor.

But on our way we spotted a flea market!  I really enjoy flea markets and garage sales... but usually it doesn't seem like our location and/or timing is right for finding them.  I found several little things I wanted, and all for just $6.00!  Then for no charge, this man sang us a song! 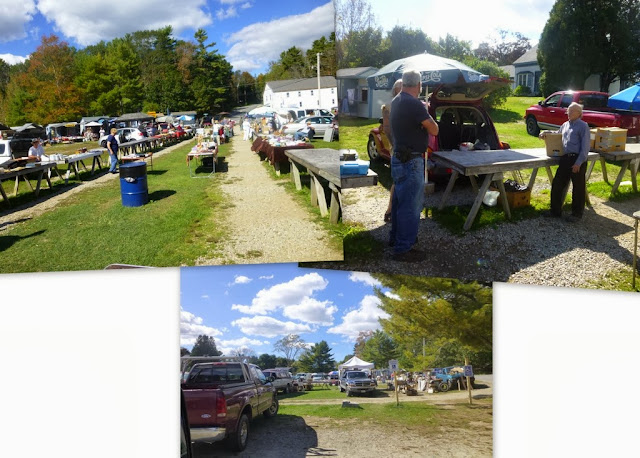 Most vendors were packing up by the time we got there, and this man (on the right above) had packed up his stuff... but when he saw our Harley attire, he told us of how he wrote a song for a bike friend of his many years ago.  He wanted to sing it for us, and waited till he had our full attention.  He still had a really good voice, and the song was entertaining.  You never know what you will get at a flea market.

We found us a seat on a dining patio and watched boats of all kinds come and go. 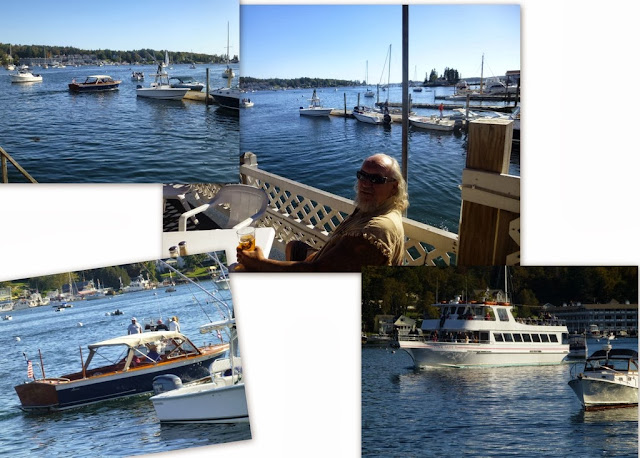 
and we walked around the little harbor town...
visiting some of the shops, which of course are there for the tourists to buy souveniers.
﻿ 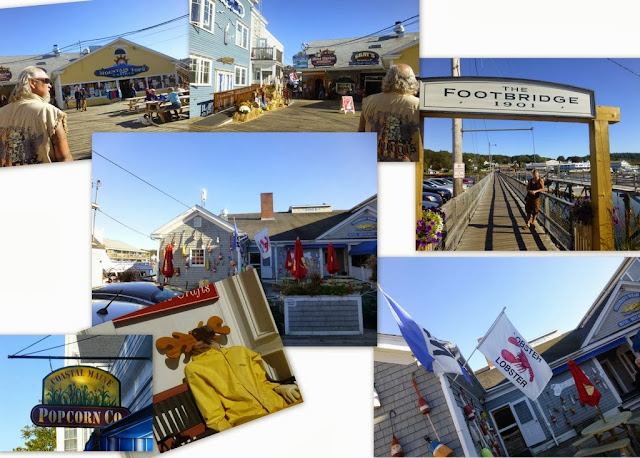 Brunswick
The next day we made a trip into Brunswick, Maine.
When we took the exit for Brunswick, straight ahead was another flea market!  At one entire corner of the large building were tables and piles of stuff!  We like to buy DVD Movies, if we can get them for cheap, since we don't have satellite or cable... and they had lots.  We picked out a stack of movies, and worked a deal.  But we chatted, and when they found out we were all the way from Oregon, they said "throw in another movie"... then they threw in 2 LIFE magazines that Jeff had picked out from 1965, when his brother was in Vietnam.
These 2 guys are Franko and Moses, and they are "pickers".
I said to them "watch out you may end up with your own TV show".  They knew what I was talking about, and I guess the guys from "American Pickers" had contacted them.  So they let us in on all about how that worked.  But for them... they are content just picking and selling. 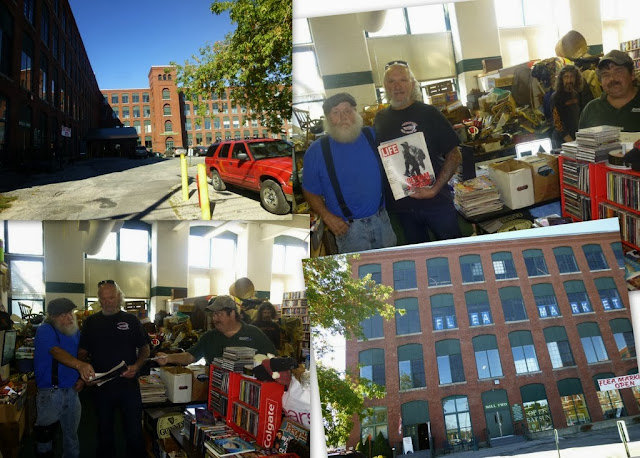 We had read of Historic Maine Street in Brunswick... but it wasn't really much.
Partly because nearly all of the shops were closed!
But driving further down Maine Street,  we saw Bowdoin College campus.
Established in 1794, it was a beautiful campus to tour. 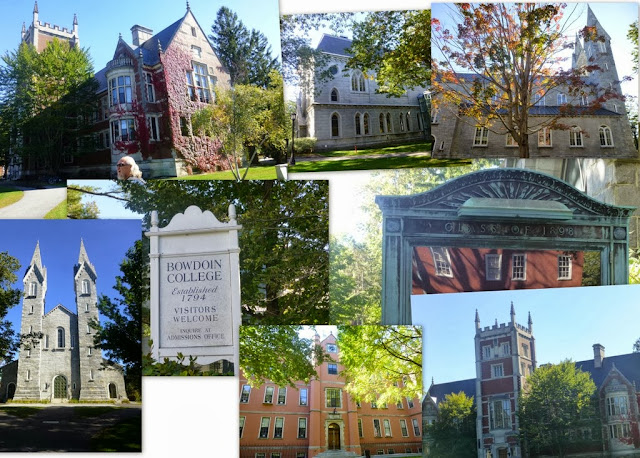 So we left Maine this morning, and traveled just 115 miles, and landed at Salisbury Beach SP in Massachusetts.  While in New England, we've stayed near the water, and taken day trips to bays and Atlantic Ocean beaches... but we haven't really BEEN on the Atlantic Coast.

So I had found Salisbury Beach SP on the Atlantic Coast in Massachusetts.  It's on the border of New Hampshire, and we haven't spent any time in New Hampshire either, so this will be a good stop for both reasons.

And we're confident that we can resolve our Kayaking withdrawals while here.  We have a  river on one side of the park, and a nice beach on the Atlantic Ocean on another.  AND we have some great weather in the forecast!  so we are in for a good time!

Email ThisBlogThis!Share to TwitterShare to FacebookShare to Pinterest
Labels: Maine