3 Years ago Today...
...was our first night on the road in our new Big Country fifth wheel!  We pulled out (a bit nervous) from the Heartland Service Dept in Elkhart, IN and spent our first night in Milwaukee, WI at the Fairgrounds.  What a kick-off that was, backed up to a roaring roller coaster! (and for $65!)  We visited the Harley factory and museum.  Our Big Country has been very good to us for living in it for 3 years... only a few very minor things we've had to fix or replace.
But back to present day...  Fort Abraham Lincoln SP
We had such a wonderful stay at Fort Abraham Lincoln State Park in Mandan/Bismarck, ND.  It's a very beautiful well-kept park with lots of history and on the Missouri River. 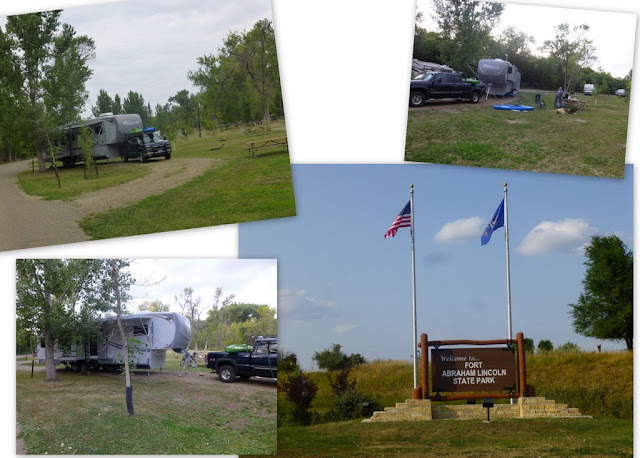 So what did we do?
We rode our bicycles all over their trails and paths, and visited the historical areas on site....

Fort Abraham Lincoln was once an important infantry and cavalry post. It was from this fort that Lt. Col. George Armstrong Custer and the Seventh cavalry rode out on their ill-fated expedition against the Sioux at the Little Big Horn. Portions of the military post, including the Custer House, have been reconstructed.
Custer's House 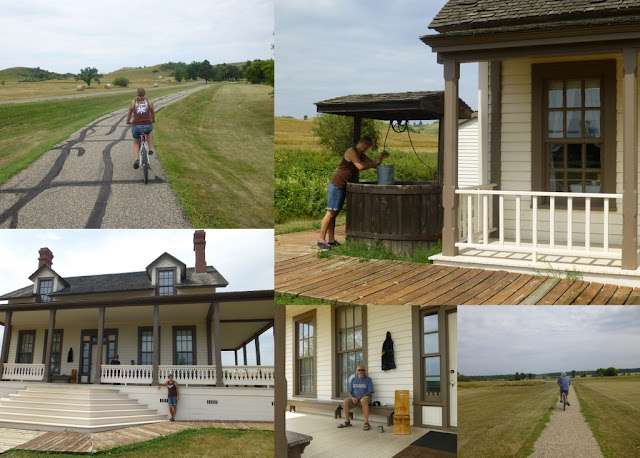 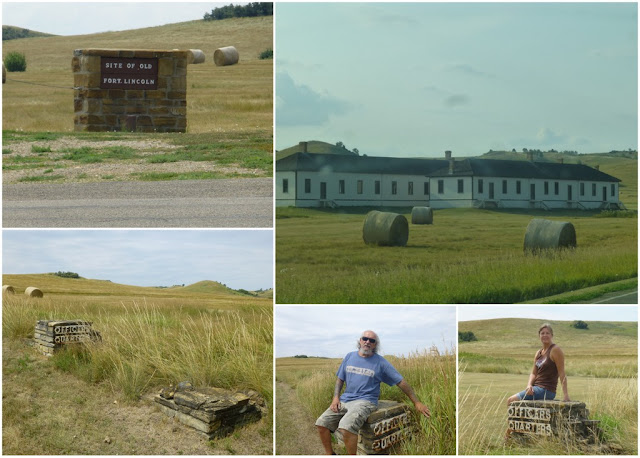 Stables
That's as far as I got, getting on the horse.  Fortunately, it was a real patient horse. 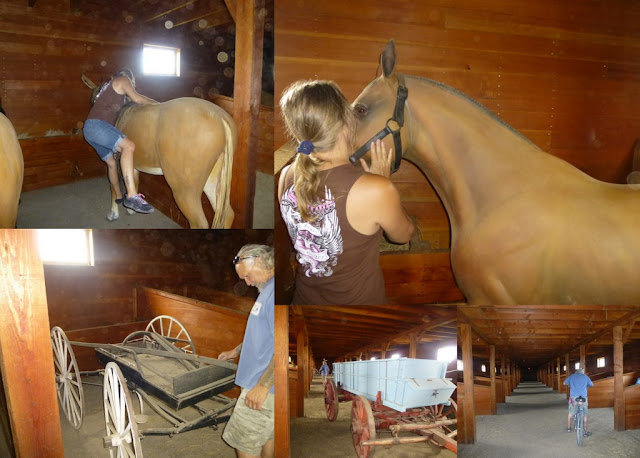 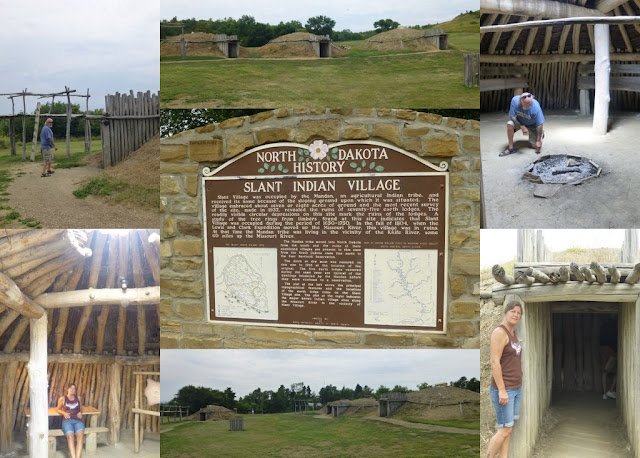 Museum﻿
The museum contained artifacts from the Lewis & Clark Expedition, the Mandan Indian Tribe,
and the Civilian Conservation Corps. 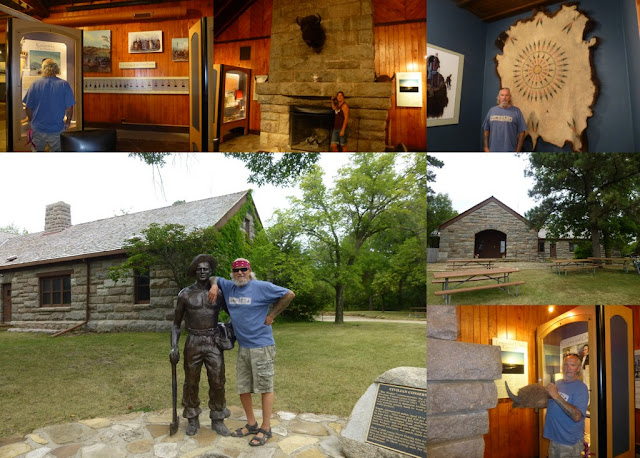 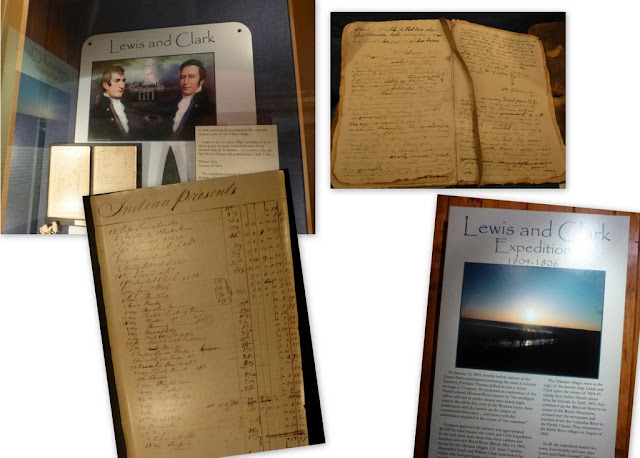 After a lot of bicycle riding and site seeing, we went into Mandan and Bismarck.
They had a Harley dealership, so had to go there... They had a brewery, so had to go there.
Laughing Sun Brewing Co. was a small brewing establishment that offered some great brews,
and friendly people, but the only food they offered was pretzels. 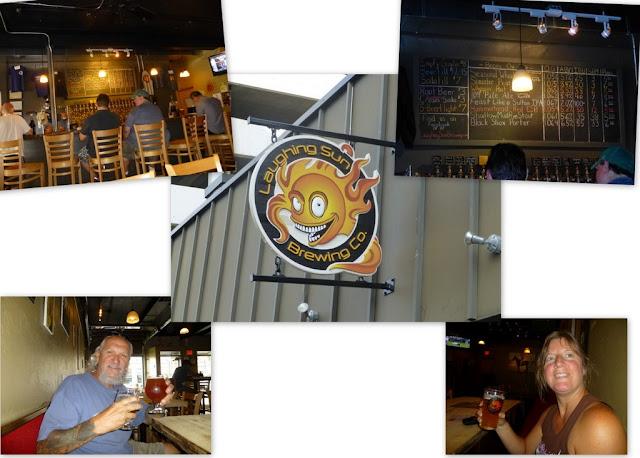 Next door was a shop that looked as if it would have our incense... which it did.  But when I turned around... I guess after all those years riding hogs, Jeff finally turned into one! 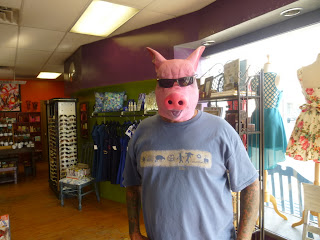 So THIS is where we can get that pig mask we've always wanted!
We returned to the park in time to put our Kayaks in to the Missouri River! After the bicycling and the Kayaking... I can say I don't miss having the Harley with us at all.
My wrists and arms sure are sore though!

I have so much more to Show & Tell of our travels and stops today... but it will have to wait for tomorrows post!

We have settled into Buffalo River SP in Minnesota for the night.  The price was quite high for a State Park we thought... and we really thought that when we got parked and found out it was Electric only... No Water!  If they had told us, we certainly would have put water in the tanks on our way in.
So Lesson Learned... Don't Assume... Always Ask if the site has water hookup!


We had another great day... so more to come tomorrow!
Posted by The Bright's at 8:08 PM